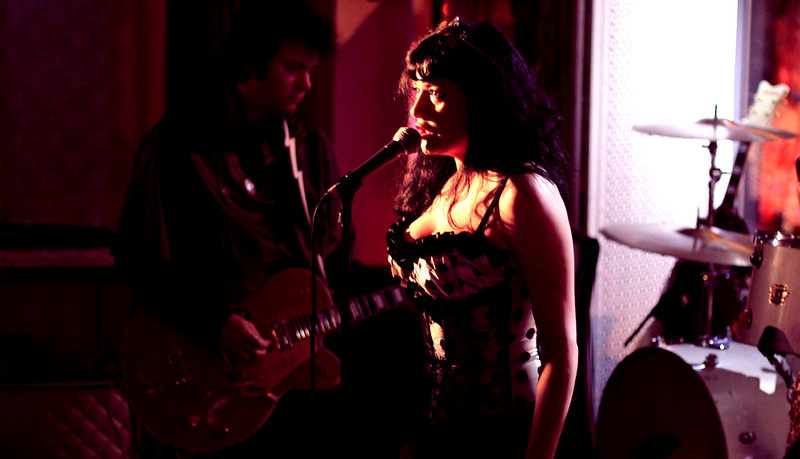 Empress of Fur at the 13 July 2013 Lobotomy Room. Photo by Chris Magee of Bopflix


Sure, there were a few strikes against me that night: it was so off-puttingly, oppressively Tennessee Williams- melodrama-hot that I suspect loads of people opted to stay home rather than venture to an un-air conditioned nightclub. It also didn’t help that the entire Northern Line (which services Old Street, the closest tube station to the venue Paper Dress Vintage) was down for engineering work all weekend. And desiccated monkey skeleton billionaires The Rolling Stones were playing in Hyde Park on the same damn night and stole some of my thunder (couldn't they have consulted me first?).  But every time I do a Lobotomy Room it feels like a triumph against adversity, and in spite of all that, the fourth-ever Lobotomy Room was pretty damn successful, with Paper Dress Vintage full and buzzing with the hip in-the-know bohemian elite.


In the beginning: the original line-up of Empress of Fur in 1995

Having the mighty Empress of Fur as the special musical guest at Lobotomy Room was a bit of a dream come true. I've known these crazy mofos since the mid-1990s, when I first started exploring the crème de la crème of London’s subterranean rock’n’roll clubs like the much-missed More than Vegas, the Frat Shacks and Virginia Creepers (which very much influenced what I’m trying to do with Lobotomy Room). In fact, when I interviewed Empress of Fur for quintessential American hardcore punk zine MAXIMUMROCKNROLL (I was their London correspondent, covering mostly garage punk and rockabilly, throughout the 1990s), it was at More than Vegas. The issue of MRR with my Empress of Fur interview came out in July 1995 – talk about coming full circle! What I wrote about them then remains true:

Empress of Fur – England’s sexiest band? The question is rhetorical. Of course they are. Check out their recently-released six song debut CD How Does That Mad Bad Hawaiian Voodoo Grab You? (Raucous Records) for proof. The band (who have every line in Elvis’s 68 Comeback Special memorised) twang-out vicious rockabilly-burlesque, while perma-pouting front-woman Venus Raygun is like both Elvis and Ann-Margret in Viva Las Vegas morphed into one shapely body. Appropriately enough, I cornered them for a drunken, rambling (well, on my part anyway) interview deep in the bowels of London’s More than Vegas club, where they’d come to catch a performance by their friend Helen Shadow and her new band The Queen B’s.

I’ll always remember the first time I saw Empress of Fur, which was purely by accident. It was at the Water Rat’s in Kings Cross. The band stirred my brains with a spoon, stylishly incorporating aspects of so many of my favourite things (Link Wray, The Cramps’ school of punk-y rockabilly, Russ Meyer sexploitation films, 1940s and 50s exotic burlesque dancers); Venus was a scathing front-woman, invoking the likes of Bettie Page and Tura Satana. At one point there was a technical glitch, the band all left the stage except for Venus, alone and scantily-clad in a sensational showgirl outfit. A drunken woman in the audience (a total mouse burger / turdette) started heckling her, and a riled-up Venus (glass of brandy in hand) was snapping back at her. It was so antagonistic, confrontational and rock’n’roll, it gave me goose bumps! I've always loved bands that create a sense of tension and drama. In fact, I've always thought a typical Empress of Fur gig evokes the opening moments of Russ Meyer’s 1965 B-movie masterpiece Faster Pussycat, Kill! Kill! when Varla, Rosie and Billie are frantically go-go dancing while sweaty, leering men are shouting, “Go baby, go!” Imagine that sustained for a whole hour.


Anyway, at this Lobotomy Room the truly majestic Empress of Fur took to the stage to the introductory music of Link Wray’s twangy Batman theme and finished by rampaging through “Garbage Man” (The Cramps’ finest moment), comprehensively rocking the freakin’ house (and freaking out a few squares) in between. Venus cavorted like a sex kitten gone berserk - think Ann-Margret in Tommy, minus the baked beans and soap bubbles. 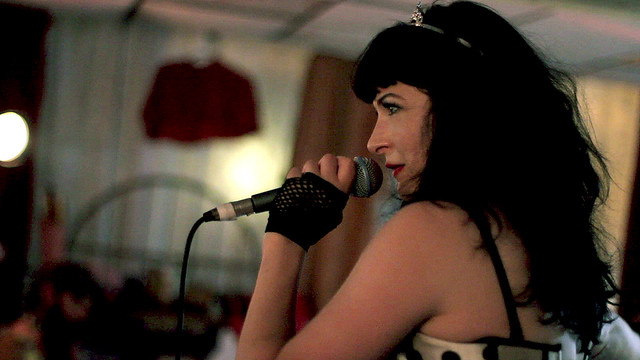 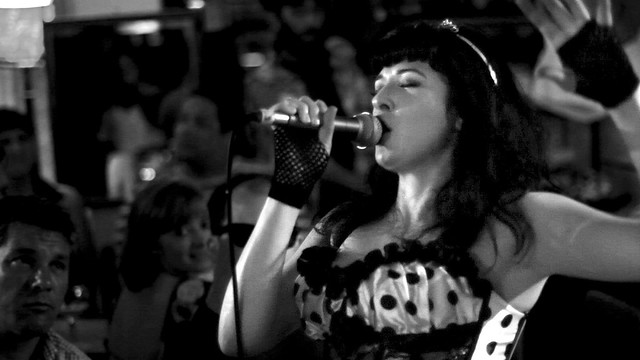 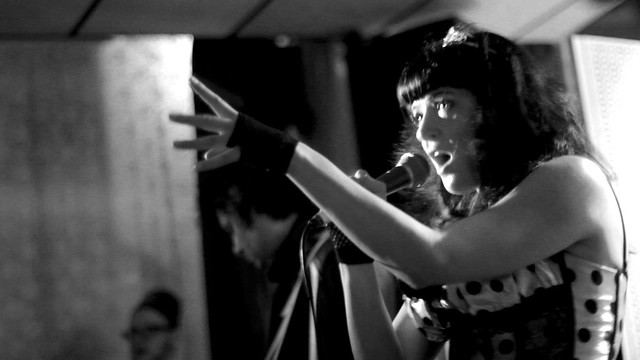 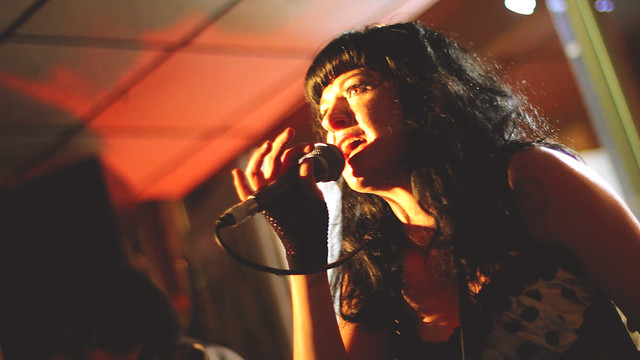 Empress of Fur photos by Chris Magee of Bopflix (loads more great shots on my flickr page. In that second last one you can see me in bottom left corner, wearing a fez)

Musically, I pretty much cleaved to my established template of creating a sense of the exotic, pagan and taboo with kitschy Mondo Tiki exotica, gradually cranking up the tempo with more raucous rhythm and blues and rockabilly, until finally blasting everyone’s faces off with punk freak-outs at the end of the night when we’re all liquored-up and feeling aggressive (I may just be speaking for myself here). Why mess with the formula?

As I've said before, leather-clad punk grandma Edith Massey (1918-1984) is the patron saint of Lobotomy Room. Playing two essential statements by her (“Big Girls Don’t Cry” and “Punks Get Off The Grass”) felt de rigueur. Massey’s wonderfully awful voice suggests cockroaches scuttling over a trash can lid – which is the sound of Lobotomy Room. 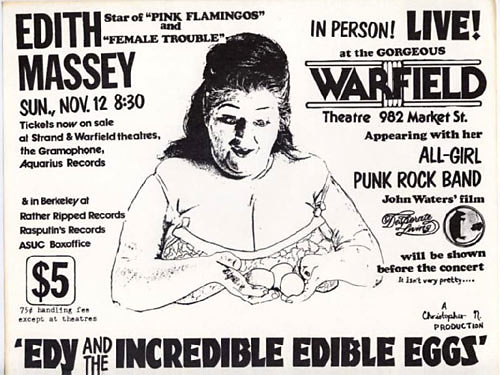 / Flyer for Edith Massey (aka Pink Flamingo's Mama Edie) performing a club gig towards the end of her life -- accompanied by an all-girl punk rock band! And a screening of Desperate Living! Ah, for a time machine. (Via) /

Beautiful women dancing at Lobotomy Room! The glamorous Joelle (in leopard print dress) and friend. I seem to recall they were dancing to "Little Girl" by John and Jackie 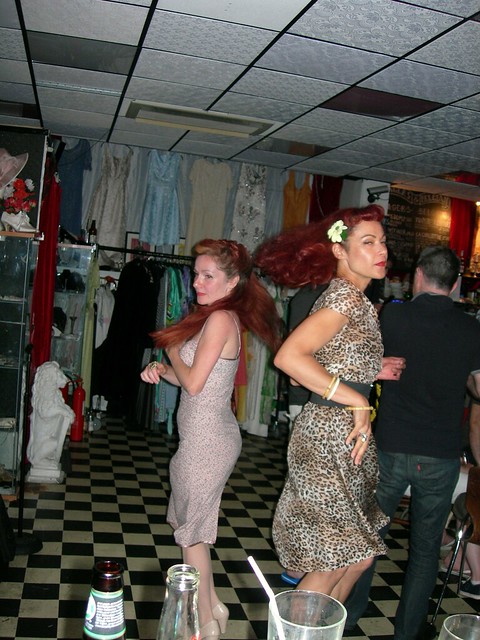 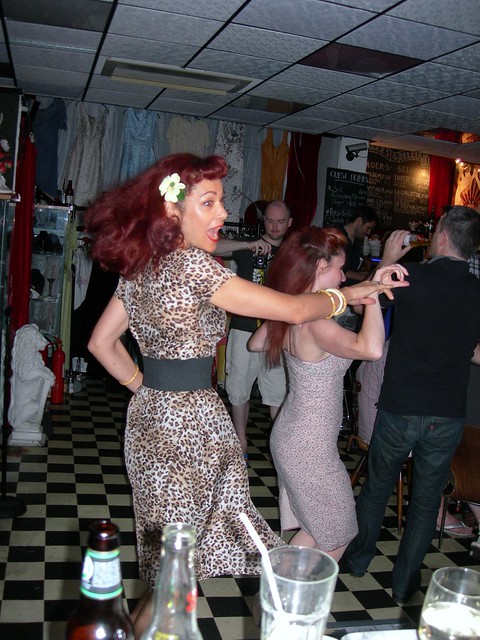 Other noteworthy tracks I played: obviously the music of the tempestuous Ike and Tina Turner is like oxygen for me. I’m currently obsessed by “Tina’s Dilemma”, the B-side to the Turners’ stone cold 1961 classic “I Idolize You” which deserves to be far better known. It’s a great rhythm and blues rave-up, the sound of Ike and Tina at their most frenzied, with Tina and the Ikettes wailing like their lives depend on it. (With the scary and unstable pistol-packing Ike behind the production desk, maybe their lives were depending on it). I particularly love the campy, sarcastic call-and-response vocals exchanged between Tina and the Ikettes: “Hey, Tina!” “Yes, ‘ettes?” which builds until queen bee Tina gets exasperated (“But Tina!” “Now what?!”).

Another eternal source of inspiration is the soundtracks of sleaze king filmmaker John Waters. So it was like Christmas day when journalist and man-about-town Kevin Allman, my friend in New Orleans, emailed me an mp3 of American doom-grunge maestros The Melvins’ slow, sludgy and metallic death-punk deconstruction of the theme tune to Waters’ epic Female Trouble (1974). The Melvins take the original (sung of course, by raspy-voiced Divine) and filter it through their trademark awesomely heavy, post-Black Sabbath grind’n’caterwaul sensibility.

Anyway, it sounds like luxuriating in dark, fetid slime and fits perfectly alongside Lobotomy Room staples by Turbonegro, The Dirtbombs and The Voluptuous Horror of Karen Black. (Speaking of which: it was gratifying to look up and see people enthusiastically moshing and singing along to Voluptuous Horror of Karen Black’s “Underwear Drawer.” The song is surely a putrid classic in-waiting).

There are loads of photos from the night, and I look sweaty, puffy and blotchy in every single one of ‘em (but at least they are documentary evidence of the vintage fez I bought in San Francisco in April 2013 – although I suspect it was askew much of the time). You can see them all – raw and uncensored – on my flickr page. Thanks to the very talented musician, photographer and filmmaker Chris Magee of Bopflix for his beautiful shots of Empress of Fur in action. (On flickr his pics are interspersed with my own pretty pedestrian photos; I don’t think you’ll have much difficulty distinguishing them! Follow the amazing work of Bopflix on tumblr, Youtube or Facebook. He does a pretty astonishing job of documenting the international rockabilly scene. Check him out). I was busy behind the decks pretty much all night, so thanks as well to my friend Lauren (one half of the blues-punk duo Spanking Machine, stars in the making) for taking some truly berserk pics of the sweaty clubbers on the night.

A sampling of glamour shots of Lobotomy Room attendees: 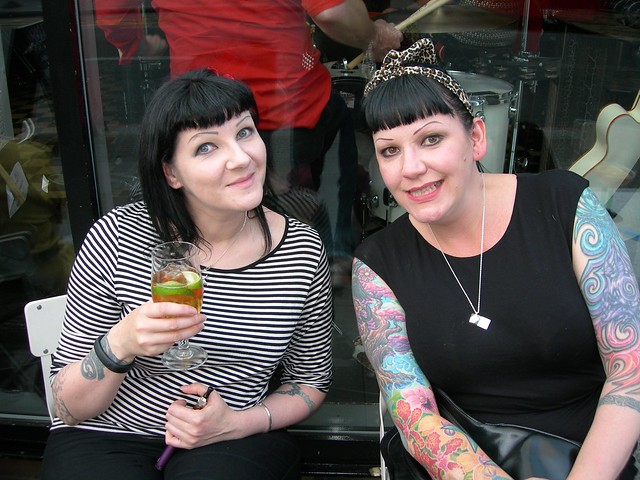 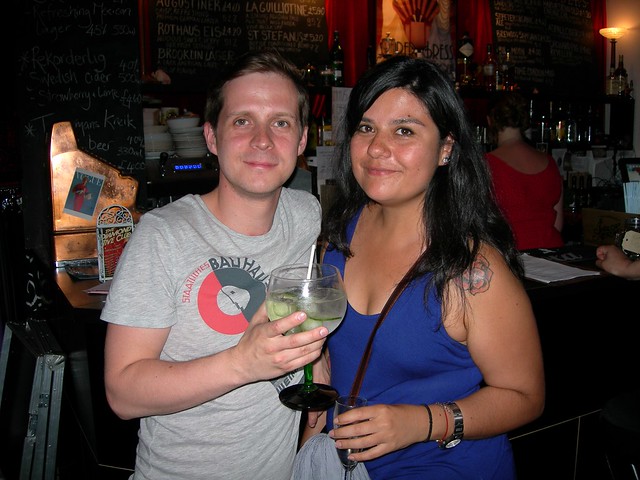 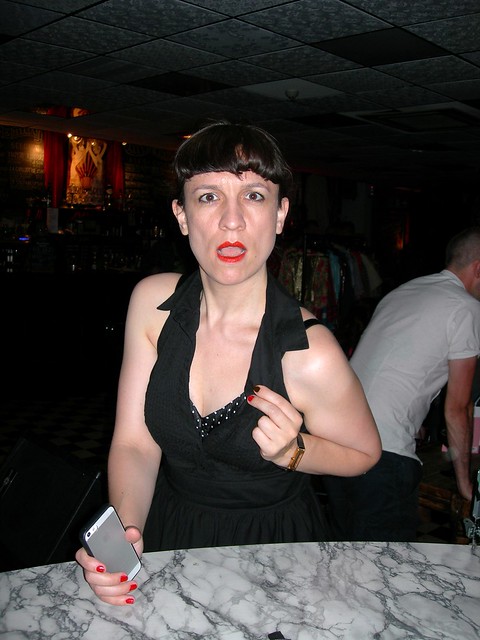 Gritty Yorkshire lass Rachael, flashing me her polka dot What Katie Did bullet bra. The low point of the night was leaning over to speak to a seated Rachael later on -- and splashing my beer all down her chic black dress in the process. Can you say cringe! Luckily she was (relatively) forgiving 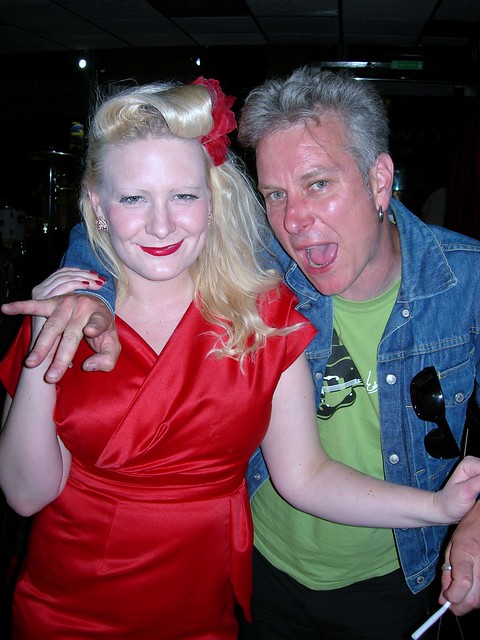 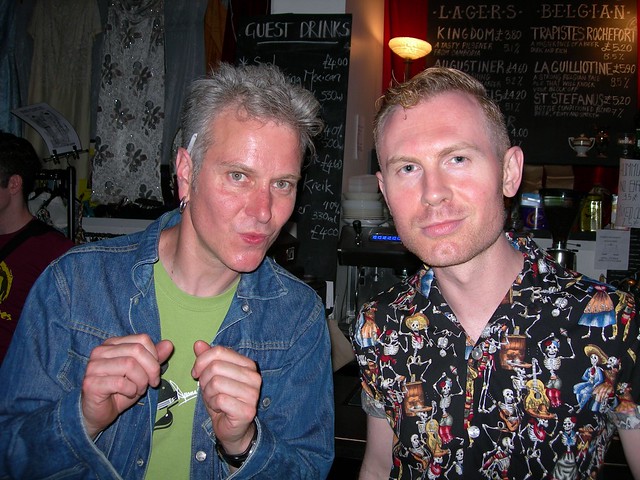 Dominique and Christopher (we get cute boys at Lobotomy Room) 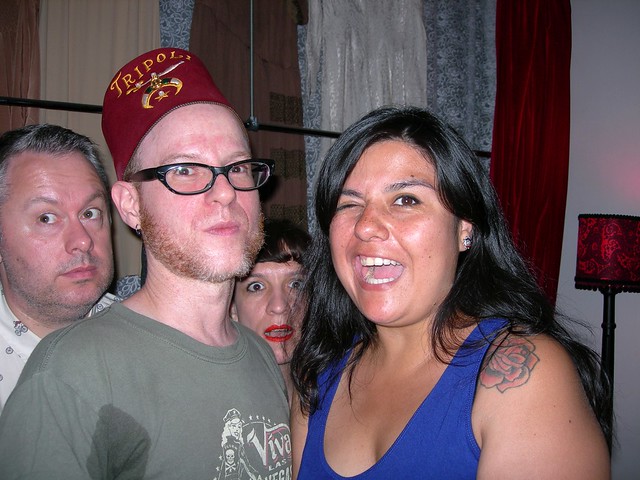 Mia and I (don't look at my sweat patches; and my fez is on crooked), with Martin and Rachael gurning in the background 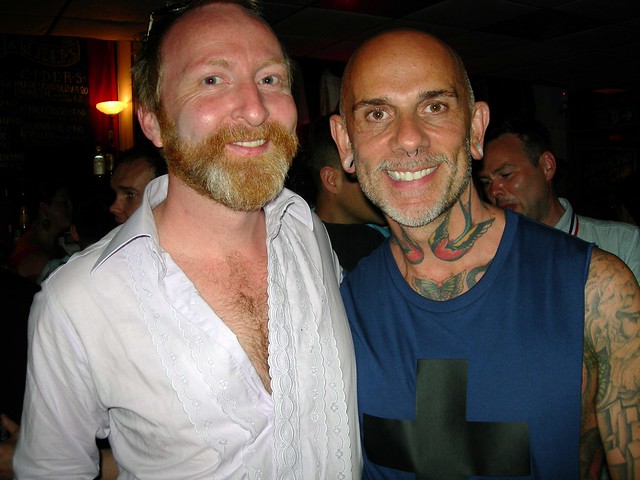 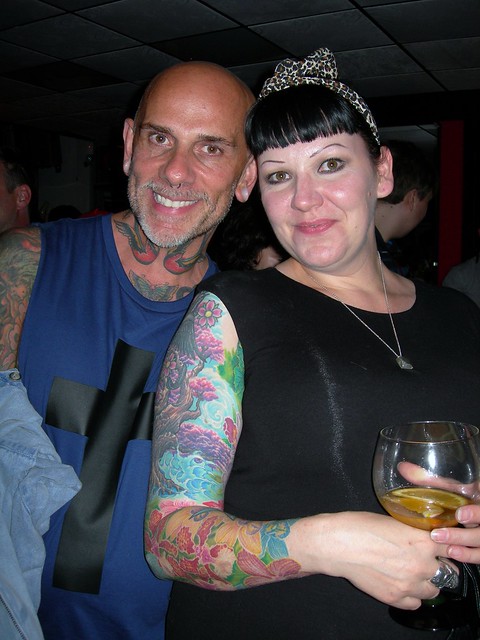 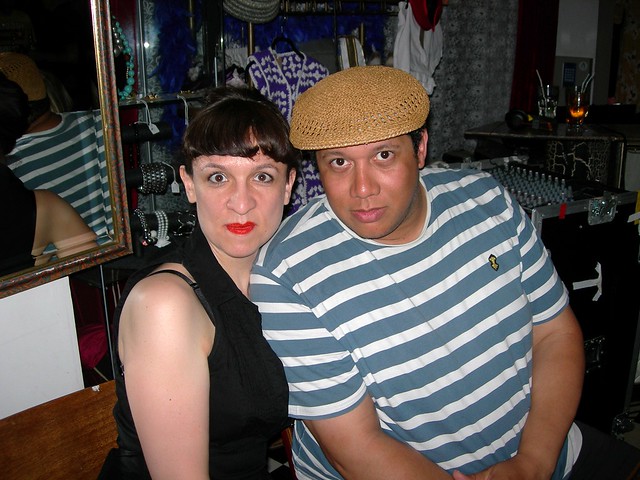 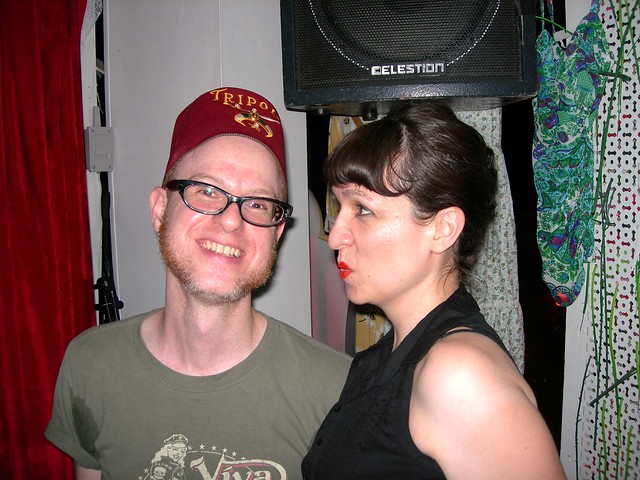 Rachael and I (this was after I'd splashed her with beer. What. A. WOMAN). 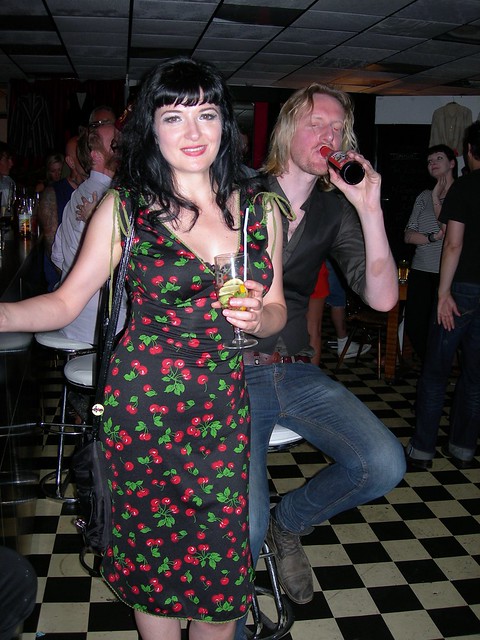 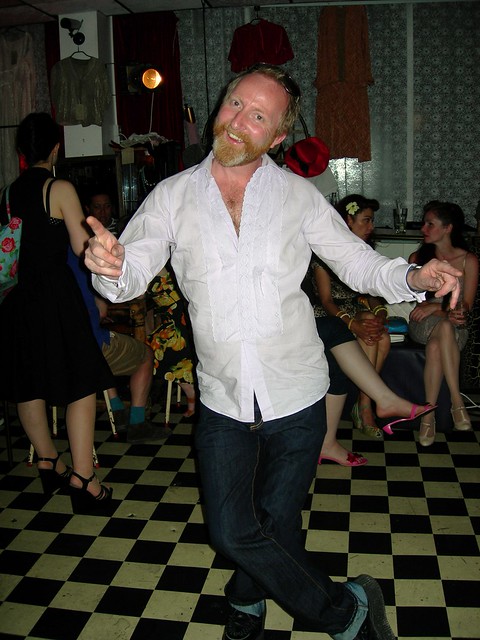 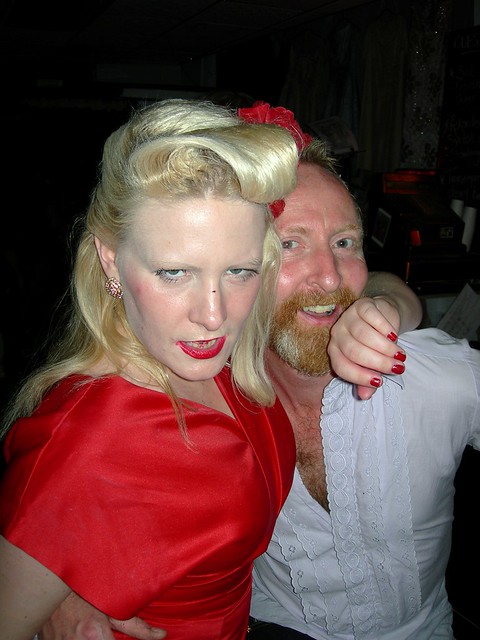 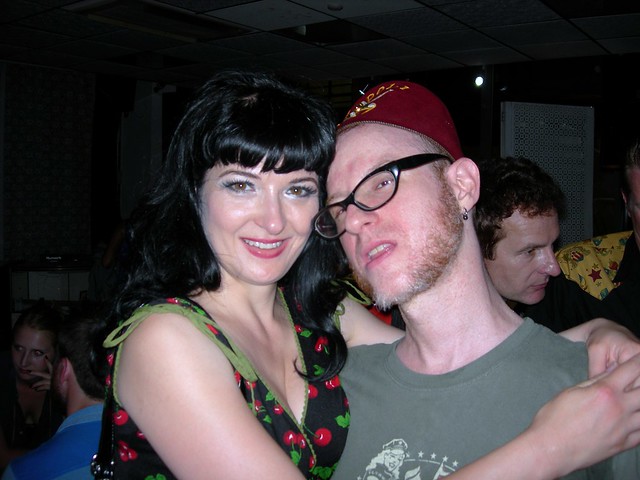 Venus and I (Empress of Fur drummer Edward on the right) 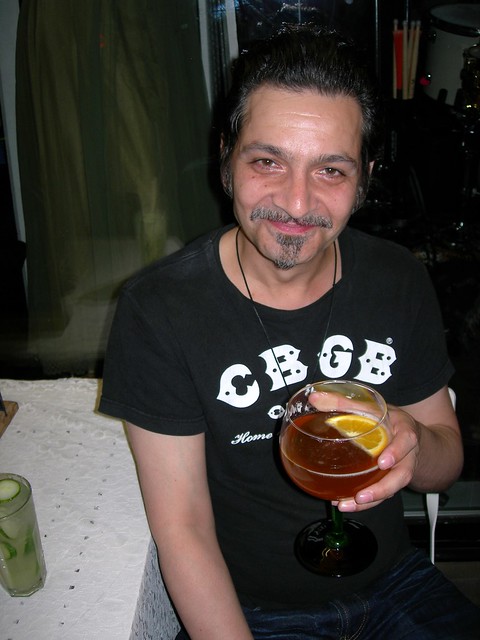 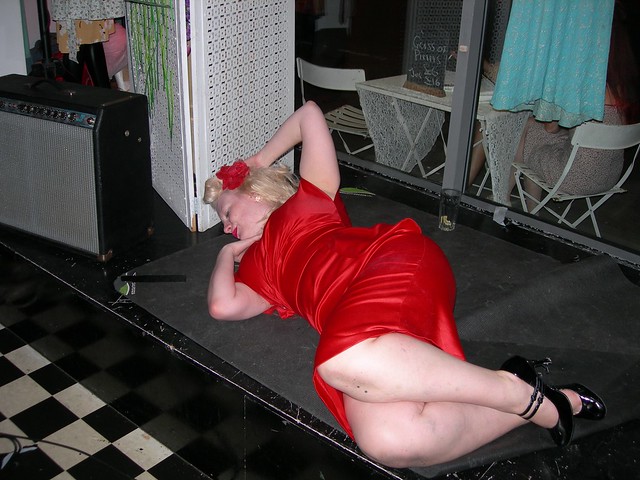 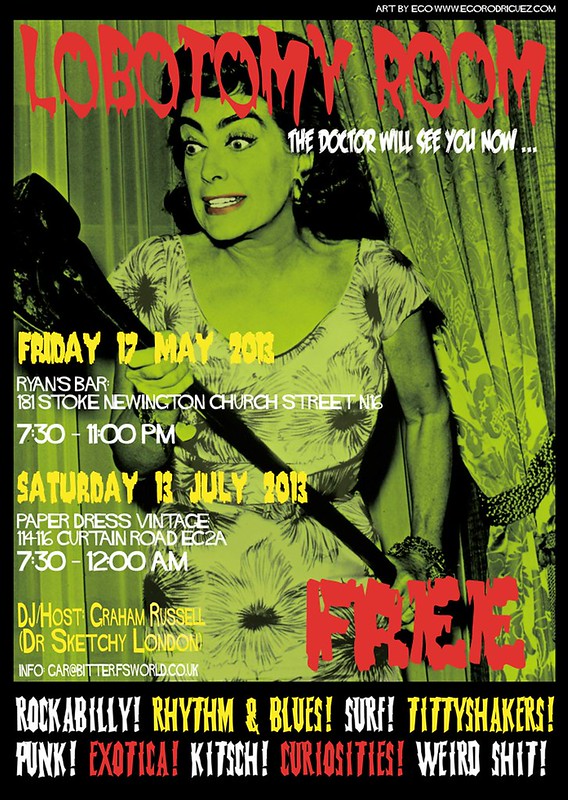