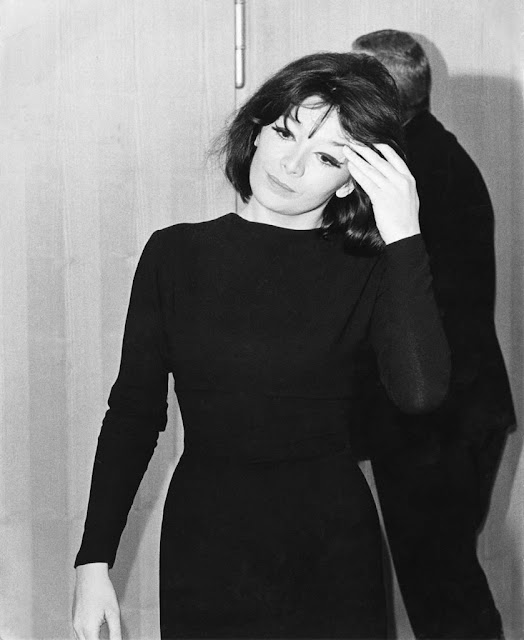 I last saw Juliette Greco perform in June 2000 at The Barbican – one of the most mesmerising concerts I’ve ever seen. After a decade-long gap, she returned to London to cast another spell, this time at The Royal Festival Hall on 21 November 2010 to conclude the 2010 London Jazz Festival. My initial impression at seeing the now 83-year old grand dame of French chanson take the stage was to note that she looks regal but frail– until she opened her mouth. Greco’s impossibly deep and sensual voice, saturated in a lifetime of Gauloises (or Gitanes?) smoke and vin rouge, is still lacerating. (Someone once described Marlene Dietrich’s voice as sounding like autumn leaves being crunched under leather boots. It equally applies to Greco’s expressive throaty rasp). Then, that she is reassuringly still beautiful and her incredible charisma and sense of drama more potent than ever. Onstage, chanson’s great living exponent remains a torrent of seething emotion and volcanic intensity.

A quick summary for any newcomers to the magic of Juliette Greco: She emerged from the smoky cellar dives of post-war Left Bank Paris like Le Tabou and La Rose Rouge to achieve international stardom as both a chanteuse and an actress. Greco and her family had been active in the French Resistance, and her music and image are steeped in the rebellious, politicised bohemian French intellectual life centred around Saint-Germain-des-Prés. From early on she was encouraged to sing by the likes of by Jean-Paul Sartre and Boris Vian, and besotted leading French poets and philosophers wrote lyrics specially tailored for her (wonderful songs like “"Si tu t'imagines”, her first hit), establishing Greco as the black-clad high priestess of existentialism and a strong, enduring female presence in French popular culture. In the late 1940s she began an interracial affair with visiting American jazz star Miles Davis. Author Lewis MacAdams argues “the offspring of their three-year, long-distance liaison – of the marriage of bebop and existentialism – was the birth of cool.”

/ Beatnik icon: a very young Greco at the beginning of her career in the early fifties / 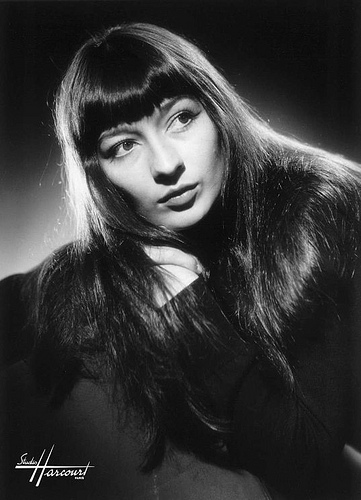 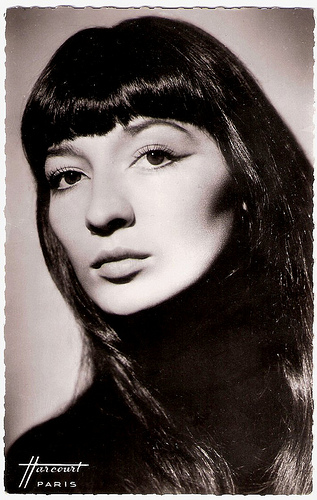 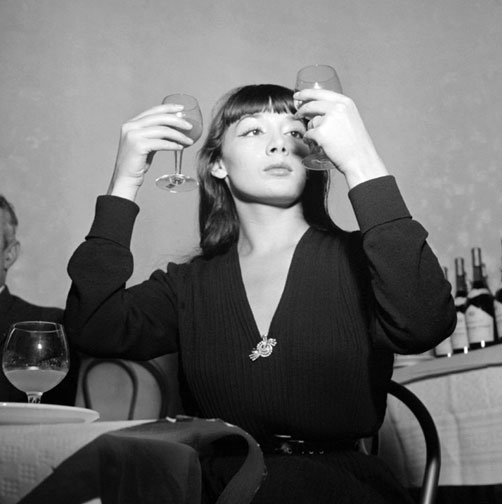 / The birth of cool: Miles Davis and Juliette Greco in the fifties / 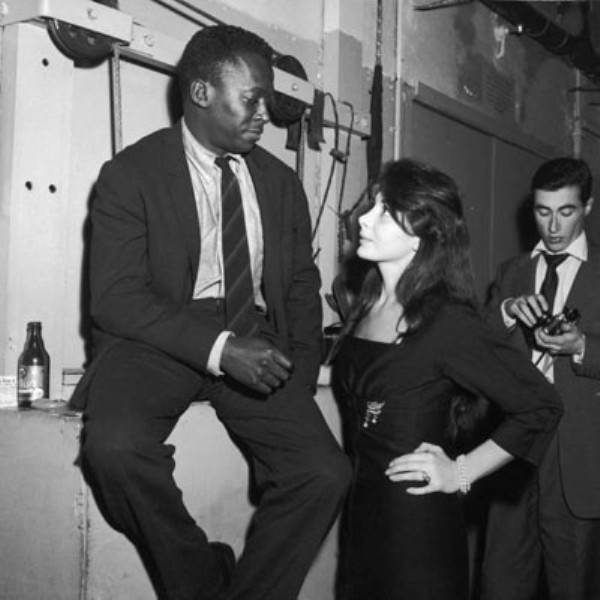 But hey I’m superficial, so it doesn’t hurt that in the 1950s Greco was lusciously, wantonly beautiful and nailed a timeless, striking almost Morticia Addams-esque look: tousled mane of dark hair, all-black wardrobe, kohl-blackened eyes under a Bettie Page fringe. The liner notes to one of her 1950s albums swoons about “the fascinating child-woman with the wild black hair and the deep-set burning eyes ...” Greco’s magnetic image set the template for female beatniks worldwide, who ironed their hair and donned winged black Cleopatra eyeliner and black polo neck sweaters in emulation. (As a fashion icon Greco belongs up there with countrywoman Brigitte Bardot and Edie Sedgwick. These days, fashion stylists and photographers probably reference the Greco style without realising where it originated). 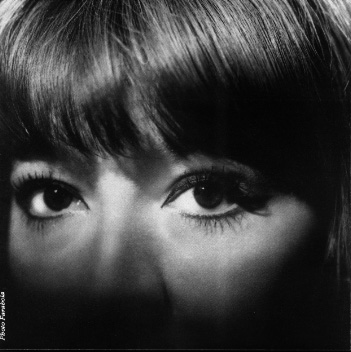 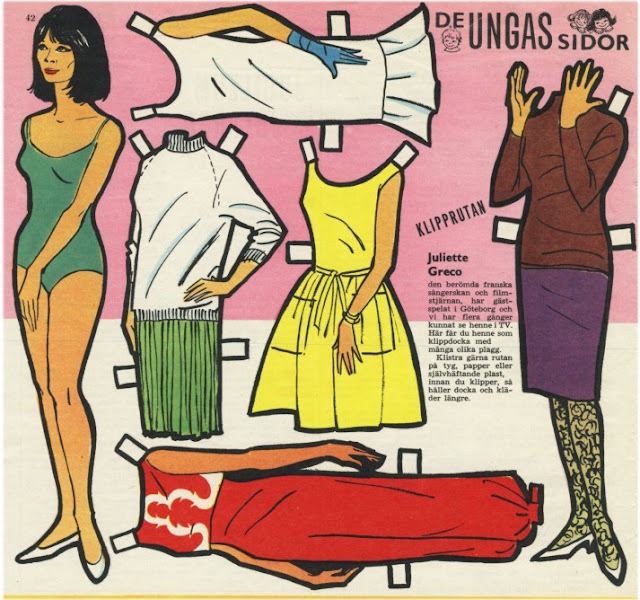 / Various Greco faces over the years (during her fifties Hollywood stint, she had two nose jobs, which dramatically changed her appearance) / 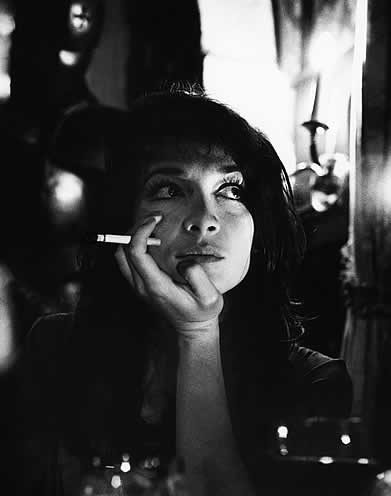 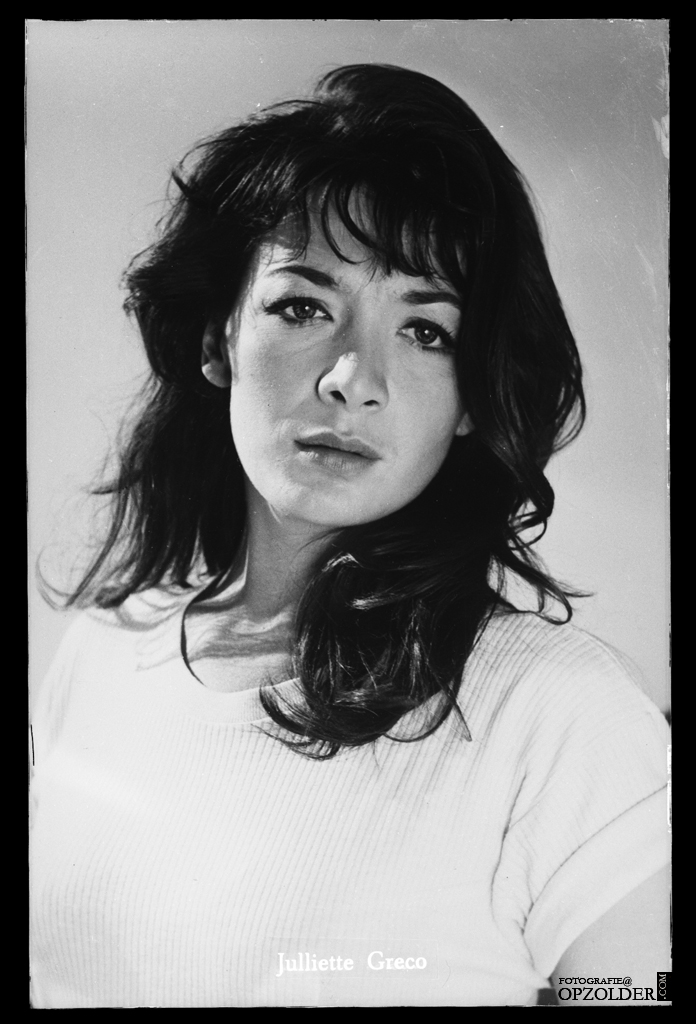 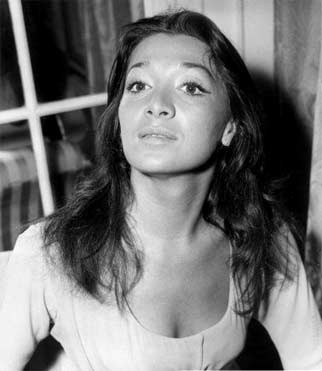 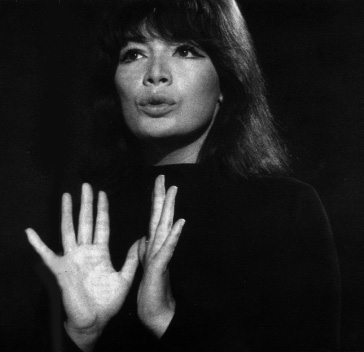 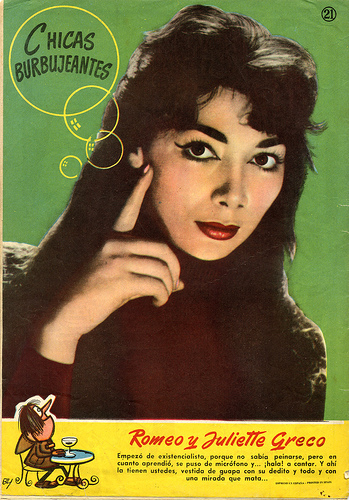 / Greco in Hollywood: co-starring with Richard Todd in the 1958 film The Naked Earth / 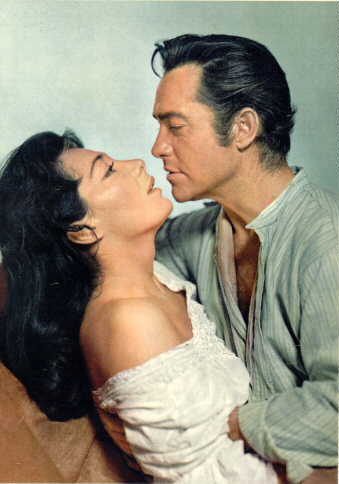 Anyway, it could have been a nostalgic trawl through Greco’s greatest hits, written for her by the likes of Jacques Brel and Serge Gainsbourg – which would still have been spellbinding. Instead it was an evening of stark minimalism: a black stage, Greco in her signature severe black dress (a floor-length bat wing-sleeved velvet shroud worthy of Vampira), and the formidable Greco songbook stripped down to just accordion (accordionist Jean-Louis Matinier) and piano (her husband and long-time accompanist Gérard Jouannest, who composed the music for many of Jacques Brel’s classics).

And while Greco has over 60 years of songs to chose from (she made her singing debut in 1949), she obviously chose the songs that have the greatest personal meaning for her, drawing largely from her majestic late-period work (like 1998’s Un jour d’ete et quelques nuits... and 2006’s Le temps d’une chanson) rather than solely 1950s and 60s crowd-pleasing material (for example, no “Sous les ciels de Paris”, and instead of "Les feuilles mortes", she sang Gainsbourg’s song about “Les feuilles mortes”,” La Chanson de Prevert”), although the set was certainly generously studded with Greco’s classics.

With her commanding theatrical gestures, Greco is as much an actress as she is a singer. Certainly she acts as much as she “sings”: melody definitely isn’t one of her priorities. Over the years Greco’s voice has coarsened and darkened, and is noticeably harsher and more guttural than on her old recordings. But it’s something she works to her advantage: Greco belongs to that elite group of female song stylists whose husky ravaged tones were powerful rather than pretty, and ideal for conveying romantic suffering and world weariness: think late-period Billie Holiday, Nina Simone, Hildegard Knef, Lotte Lenya, Dietrich, and younger singers like Nico and Marianne Faithfull, who very much followed in Greco’s tradition.

Greco hurled herself into every song, transforming each one into performance art. Her songs evoke a variety of moods: she tore into Brel’s "Bruxelles" with an almost angry glee, whereas Gainsbourg’s “La Javanaise” was spine-tingling, slowed-down and delicate. One thing she demonstrated is that at 83 she still retains her sensuality. Introducing “Deshabillez Moi” (Undress Me) she joked she really shouldn’t be singing it at her age, but it’s such a great song she will anyway – and then became the consummate self-mocking sex kitten, which she maintained for the rousing “Jolie Mome” and “L'Accordeon” (during which she played her own body with her fingertips as if it were an accordeon). Greco still has the erotic confidence of a great beauty (whose admirers included Miles Davis, Marlon Brando, Prince Aly Khan, Serge Gainsbourg, Sacha Distel and the film mogul Darryl F Zanuck, who tried to launch her as a Hollywood star in the 1950s), and clearly doesn’t doubt her allure. (In this regard, she reminded me of another slinky octogenarian chanteuse of the same vintage,Eartha Kitt, who we saw perform in 2007).

Ultimately, though, Greco is the consummate tragedienne and the most affecting songs were the bleak dirges. The old Edith Piaf standard “Les Amants d’un Jour” told the eerie story of the suicide pact between two doomed lovers. In her intro to “C’Etait un Train de Nuit” she explained that torture, war and death are all encompassed in the song, and then sang it with her eyes squeezed shut as if in horror. In it, she repeatedly gasps, “Je me souviens” (“I remember ...”) and describes scenes of prisoners on a train en route to a concentration camp. Brel’s tender “La chanson des vieux amants” ended with her covering her face in her hands as if in agony. Greco originally recorded another Brel masterpiece, “J’Arrive” in 1970, but the song – in which she confronts death, imploring, “Pourquoi moi? Pourquoi déjà?”(Why me? Why now?) -- obviously has added poignancy and greater intimations of mortality now that she’s singing it towards the end of her own life. 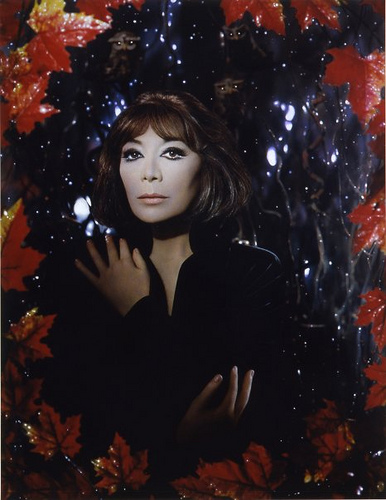 After seeing one of Marlene Dietrich’s last concerts in the 1970s, the film critic Kevin Thomas reflected, “she regarded her talent as a rare and precious wine that she would pour out drop by drop, and until it was gone it would be the most perfect, most refined of all.” Before Greco’s 2000 Barbican concert, she hadn’t performed in London since 1989 and then she waited a decade before returning. It was bittersweet knowing it was unlikely we’d ever see Greco again. For her Royal Festival Hall finale she sang a devastating “Ne Me Quitte Pas”. Greco’s is the angriest version you’ll ever hear of this Brel standard, shredding the elegant melody until it’s a savage plea (she virtually stamps her foot and shakes her fist when she sings it). Afterwards, drinking at the bar and reflecting on Greco’s artistry, commitment and urgency, we appreciated that we may have been born in the wrong era to have seen Edith Piaf, Billie Holiday or Dietrich perform, but we got to see Juliette Greco – every bit their equal. If this is the defiant but vulnerable Juliette Greco’s last performance in London, it was one none of us who saw it will ever forget.

/ Obviously photography was strictly forbidden, but at the very end of the night when La Greco came back out to take her curtain calls (and got a standing ovation), I managed to snatch this shot./ 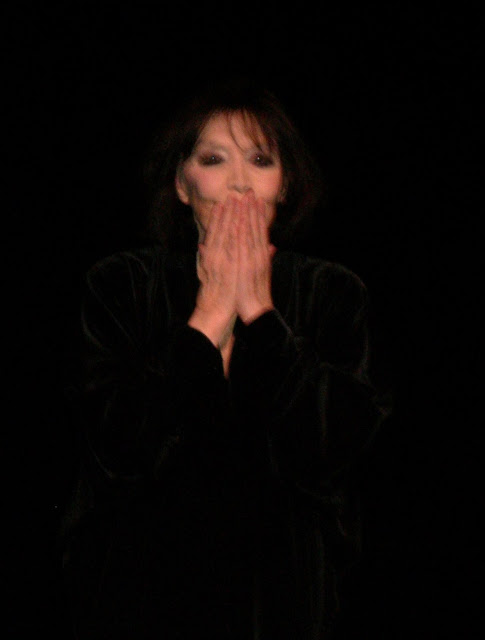 / And Christian took this one: / 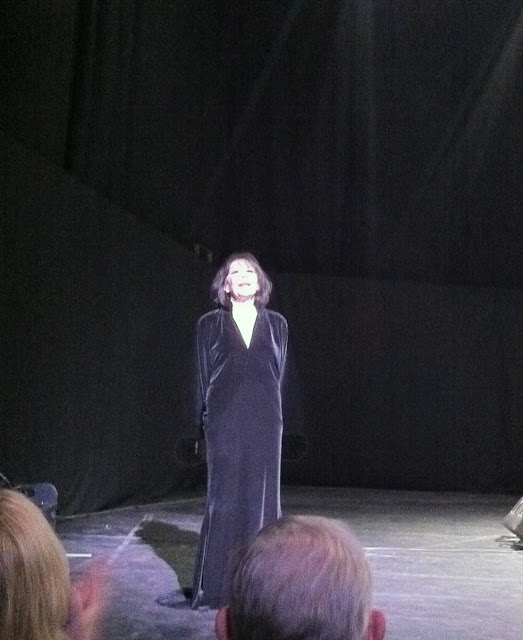 / Strange, interesting litte clip of Greco filmed in 1966 in which she sings two of the songs she performed at The Royal Festival Hall: "Jolie Mome" and "Un Petit Poisson, Un Petit Oiseau." Most fascinating is the glimpses of her backstage in her dressing room, applying her thick black Cleopatra eyeliner /


A LOOK AT JULIETTE GRECO

The Royal Festival Hall concert didn't get much coverage in the press, but it got reviewed in The Telegraph. Not exactly the hippest publication (!), but you can read it here. To their credit they also interviewed her.

I wrote this piece about Greco for the American punk website Razorcake way back in the early 2000s. I'd write it very differently now -- but here it is
Posted by bitter69uk at 15:29