Feeling jaded? Didn't get those cha-cha heels you wanted? Head-bang away those post-Christmas blues and end 2013 with a BANG – at LOBOTOMY ROOM!

Lobotomy Room – where the international sin set meet! It’s a Mondo Trasho booze party of Beat, beat beatnik beatsville rock’n’roll at Paper Dress Vintage in the heart of bohemian Shoreditch! With ME, your host Graham Russell, whipping up a rancid selection of vintage musical sleaze (think John Waters soundtracks or Songs The Cramps Taught Us) for your dancing and listening pleasure.

SIT under a vintage hair dryer drinking a cocktail bigger than your head! INDULGE in drunken vintage clothing impulse shopping! DANCE your ass off to a soundtrack of rockabilly psychosis, frantic rhythm and blues and sleazy tittyshakers!

Admission is gratuit (that’s French for FREE!!). If you’re working that night — call in sick. If you’re in prison — BREAK OUT!

The following day I posted:

Heartfelt personal thanks to everyone who came to Lobotomy Room last night! I would kiss you all if I could! It was the last one of 2013 and thanks to you it ended on a high! The first 90-minutes or so were worryingly quiet (as in: funeral parlour!) and there was zero passing trade on the street outside. But then it properly kicked off! Berserk photos from the night and a full blog and set list to follow shortly. Thanks especially to the drunken rugby players and group of rowdy Italian women for dancing their asses off and keeping the tone aggressive and sexually-charged - just the way I like it! 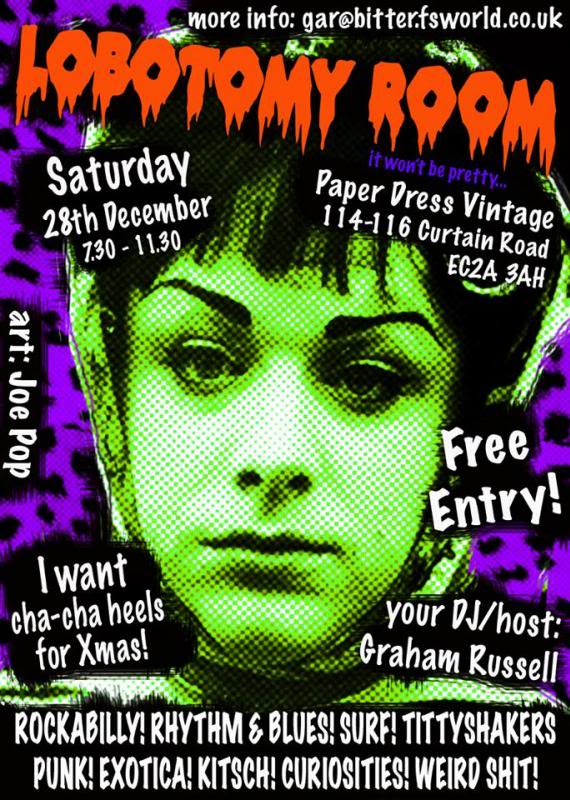 The 28 December 2013 Lobotomy Room was a bit last minute, with pretty minimal promotion. Quite late in the day Steve the organiser / promoter at Paper Dress Vintage posted a plea on Facebook announcing that the Saturday night was free if anyone wanted it. As a hungry and tenacious starlet (think: young Jayne Mansfield), of course I grasped it with both hands. I never turn down an opportunity to DJ or get laid. Plus I really wanted to end the year with one last Lobotomy Room. Funnily enough, this one fell on almost the exact anniversary of the very first Lobotomy Room at Paper Dress Vintage on 29 December 2012. So it felt nicely like coming full circle.

Having said that, I knew from the 2012 debut Lobotomy Room to have minimal expectations about doing a club night on the weekend between Christmas and New Year’s Eve. London pretty much goes into lock-down at Christmas time. The streets of Shoreditch would be a guaranteed ghost town, so I couldn't exactly rely on passing footfall and most of my friends would still be out of town. Sure enough, for the first ninety minutes or so, it was just me and the bar staff! Rather than DJ to an empty room, I stuck on an exotica CD (Ultra Lounge’s Mondo Exotica compilation of Mysterious Melodies and Tropical Tiki Tunes is like oxygen for me) and paced around, necking a bottle of beer. Would anyone come? Then my loyal boyfriend Pal arrived, followed by Mia and Alex of The Amy Grimehouse (cult cinema club) notoriety. Then much-valued Lobotomy Room regular Charlie. I kept glancing up and groups of people were arriving. Suddenly it was quite buzzing! And most gratifyingly, people were dancing!


Anyway, it was a hard-drinking, rowdy and up-for-a-laugh motley crew. Everyone really seemed to embrace the sordid and depraved atmosphere I strive for with Lobotomy Room. At times, I’d look up from DJ’ing, see the raucous straight rugby players going ape-shit and seemingly on the verge of trashing the place and think, this could go in a very aggressive direction. Should I tone down the music and mellow things out? Then I’d decide, of course not and crank up Hasil Adkins. And it all worked out fine.


Special mention must go to glamorous platinum blonde bombshell Craig (the Traci Lords in Cry-baby lookalike with the perfect winged black liquid eyeliner). Fittingly, he arrived just as I was playing Little Richard’s “The Girl Can’t Help It” (he told me later it made him feel like Divine in Pink Flamingos). What style! He’s the Cookie Mueller de nos jours, a Nan Goldin photo come to life and the closest thing I’ll ever get to a Warhol Superstar coming to my club.


There was no band on the bill this time – entre nous, the way I prefer it! It meant I got to DJ for hours and really properly indulge myself, journeying into deep sleaze and really delving (wallowing? Luxuriating?) in all my favourite musical themes and genres. Think jive honky cracker white people calypso, ominously rumbling surf guitar wipe-outs, the “chicken” series (for all the chickens and chicken hawks), the “pussy” series (I like to go “blue” at Lobotomy Room), tracks from John Waters films, a bit of a Jayne Mansfield valentine, twist music (who could resist Johnny Hallyday exhortation to “viens danser le twist”?), abrasive punk, rockabilly, bump’n’grind tittyshaking instrumentals and frantic rhythm and blues.

Inevitably I played multiple tracks from the 1964 Kenneth Anger homoerotic biker film Scorpio Rising – a bottomless source of inspiration for me. Elvis’ “Devil in Disguise” and “Fools Rush In” by Ricky Nelson have long been staples of mine. A newer addition is “Party Lights” (1962) by long-forgotten rhythm and blues one hit wonder Claudine Clark. The song throbs with urgent teenage girl group drama as Clark works herself into a frenzy pleading with her mother to let her go to the party next door (“everybody in the crowd is there but you won’t let me make the scene!”). It ends with her wailing over and over, “I wanna go!” as if her life depends on it. Clark followed “Party Lights” with the unsuccessful but intriguing macabre novelty track “Walkin’Through a Cemetery” (an essential Halloween party tune to slot alongside "Monster Mash" and Tarantula Ghoul’s deathless “Graveyard Rock”) before well and truly vanishing off the radar.

OK, that’s enough blathering from me. I’ll let the photos tell the rest of the story. I hope everyone had a great Christmas and New Year’s. Hopefully there will be loads more Lobotomy Room misadventures to post about in 2014.


/ We get cute boys with facial hair at Lobotomy Room: Pal and Charlie /


/ Elma Wolf (of Twat Boutique and my Cockabilly co-DJ) and friend. Note: Elma doesn't have jet black lips: it's a weird glitch of my ancient digital camera that created that effect /

/ The Italian women and the rugby guys really seemed to bond /

/ Italian Barbara and I /

/ Soul kiss: Alex and Craig locking lips. Once again, Craig doesn't have Goth black lipstick on. It's my damn camera /

If you don't already, follow me on tumblr. Kitsch, retro, homoerotic - and most definitely NSFW! Consider yourself warned

Re: the majestic gif at top of this blog. I'm pretty sure this is the fabulous Lorna Maitland from Russ Meyer's ode to big breasts Mondo Topless (1966). I almost certainly swiped it from my old buddy A Queen's Queen. Follow his blog here or his tumblr page here.