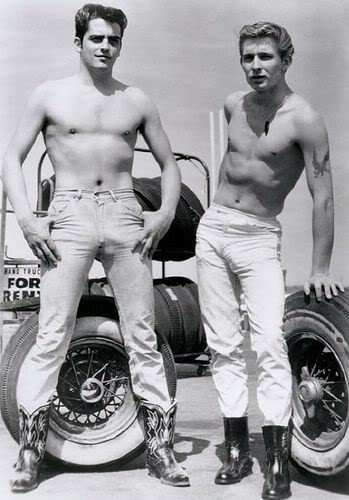 One of the things I love about DJ'ing at Cockabilly (London’s only gay rockabilly club night!) is the opportunity to play some frantic hardcore rockabilly (it’s not really part of the titty shakin’ burlesque vibe at Dr Sketchy, my regular gig ), so I really seize it when I get the chance. I did a pretty brief “guest” set (about 30 minutes long), but I went perhaps too heavy on the abrasive / kitsch / punk / hillbilly side of rockabilly this time, and am not sure it went down so well! Obviously I was hoping to look out from the DJ booth and see people dancing like this...

Have learned my lesson: if I get to DJ at another Cockabilly, will ensure to vary it more and play some more user-friendly stuff (i.e. more 50s rhythm and blues. Everyone loves 50s R&B, especially female singers: people don’t need to even know who, say, Big Maybelle, Lula Reed or Annisteen Allen are to instinctively respond to them). 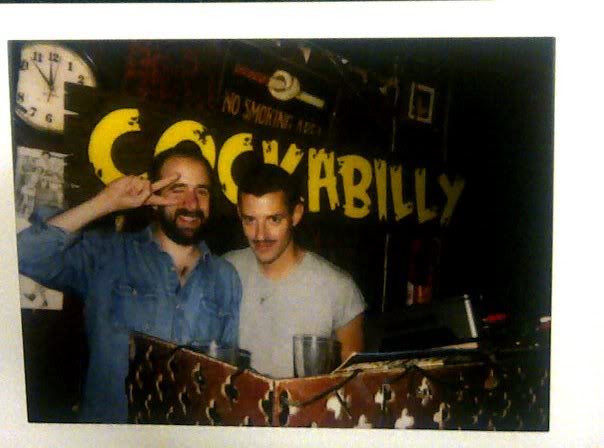 Mal and Paul: the brains behind Cockabilly

I’d also packed my DJ bag while in a hung-over / zombified state (I’d had a late one the night before; my friends the punk band Matron had played at The Royal Vauxhall Tavern) and when I started my set I realised to my horror that I’d packed one of my favourite CDs (You Better Believe It 1955-1969: White Trash Rockers) but not the insert with the track listing, which didn't help. Then my very first song wasn’t cued quite right, which rattled me. I don’t think my set ever quite recuperated from that shaky start! 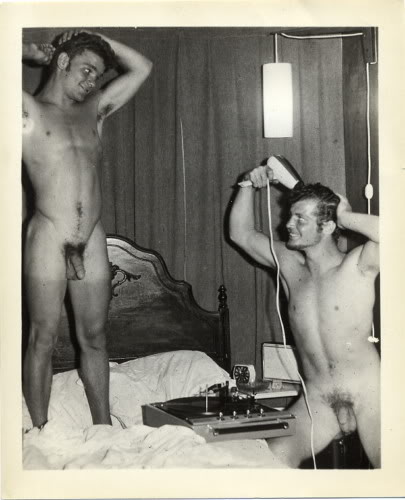 Anyway, it was still a great night. Princess Julia – the eyebrow-less high empress of East End bohemia – was in attendance (the George and Dragon just doesn’t feel right when she’s not there). The two Alexes were also both there, which always guarantees a fun time (the last time I saw them was at the 2012 Butt magazine calendar launch party a few weeks ago!). Both Alexes keep hilarious blogs, which are highly recommended: find them here and here. And Mal secured some great branded promotional Cockabilly merchandise: nice and threatening-looking juvenile delinquent spring-release novelty flick combs! To be kept in the back pocket of your Levis and whipped out to either smooth back your pomaded Gene Vincent quiff or to menace squares with. Don’t make me cut you! 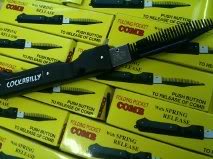 / The mighty Los Angeles punk band X tear apart Jerry Lee Lewis's "Breathless" on The David Letterman Show in the early 80s. Awkward interview (Letterman doesn't seem to know what to make of them), awesome performance. X was one of my favourite bands as a teenager and I still listen to them today. They remain the perfect punk-rockabilly hybrid. /
Posted by bitter69uk at 11:56