Saw the new Serge Gainsbourg biopic earlier this week. Not sure what to make of it: the tone and pacing of the film strange and uneven, some of the more whimsical bits really grated on me (am unconvinced by the puppet representing Gainsbourg’s subconscious – if you see the film, you’ll know what I mean!). On the plus side, it looked stunning, the performances were great (was really enjoyable seeing how the likes of Brigitte Bardot and Juliette Greco portrayed) and Gainsbourg’s music on the soundtrack gave me goose bumps. Many years ago I wrote a piece about Gainsbourg for the punk zine Razorcake. Seeing the film inspired me to dredge it up again: I’d write it very differently now, but in any case here it is!

The UK trailer for the film:

Gainsbourg at his finest:

2 August 2010 Dr Sketchy at The Paradise in Kensal Green

Felt like one of the sweatier, more chaotic Dr Sketchy nights, but still fun – some challenges can really keep you on your toes and keep you focused. The main technical glitch was that no one could locate a microphone for the master of ceremonies Dusty Limits to use. It stressed me out, but Dusty is such a consummate pro he was completely nonchalant about it and just projected his voice a bit louder. (Anyway, a mic was finally sourced midway through the night for him). The two exquisite models were Miss Johnson (aka Ruka, the brains and beauty behind Sugarlesque) and Vee Worldmistress. Towards the end of the night they posed together. I had an elegant French chanson number cued up and ready to play, but then I saw their pose: Miss Johnson sprawled across Vee’s lap, ready to be spanked, straight out of an Irving Klaw / Bettie Page bondage photo session. So I scrambled to find and cue something more raunchy and lewd: “Here Comes the Bug” by The Rumblers (the percussion almost sounds like spanking noises anyway). 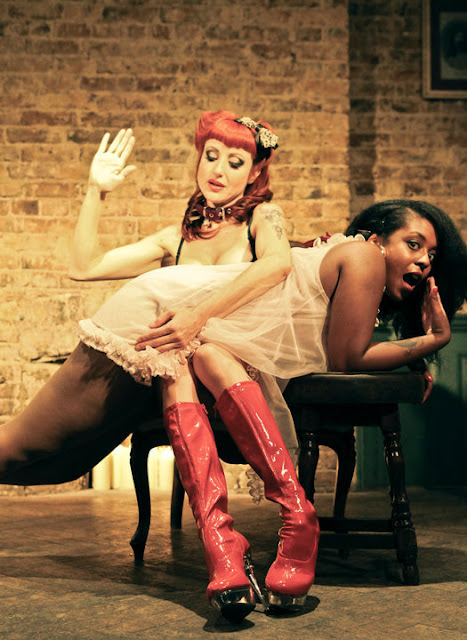 Jane Morgan singing "C'est Si Bon": not the version I played (in fact I'd never heard of this singer before), but this clip is so irresistably kitsch (the ultra low-budget set! The pouting, crotch-thrusting go-go dancers! That cotton candy bouffant wig!) I had to include it on here.


The late Johnny Thunders singing Dion’s “I Was Born to Cry”. His second last record was Copy Cats, a brilliant album of covers on which he duets with smoky-voiced Noo Yawk bloozie chantoozie Patti Palladin. I bought it on vinyl when it first came out in 1988, then many years later bought it again when it was reissued on CD. Yes, a heroin-ravaged Thunders looks distressingly cadaverous here, like a corpse being dangled on wires (he only had a few more years to live – he was dead by 1991) but he’s still in great, powerful voice and what a magnificent pompadour!