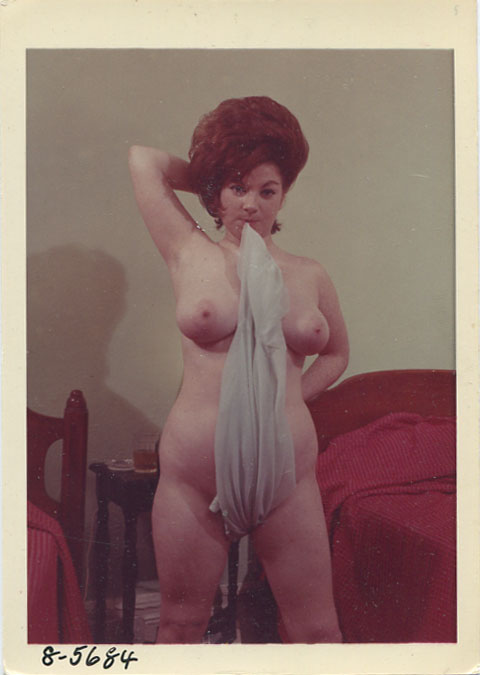 This was the first time I’d DJ’d for a Dr Sketchy at The Royal Vauxhall Tavern since the Valentine’s one in February 2013.  As a freaked-out casualty / terminal worry wart I was sure I would have forgotten everything I ever knew about using their decks. Then when I unpacked my DJ bag I quickly realised my headphones were missing the little “adapter” attachment that makes them compatible with the hole in The RVT’s console, so couldn’t use them at all. (I must have left it behind the last time I DJ’d, which would have been at the May 2013 Lobotomy Room at Ryan’s in Stoke Newington). Obviously this meant I couldn't listen to the track first in my headphones before playing it – so I had to ensure I cued the right one every time and hope for the best! (Luckily, all night I only played the wrong song once – not that anyone else would have been the wiser!). Plus I drank three pints of lager on an empty stomach (I went to the venue straight from work) – a recipe for things getting potentially sloppy. But in fact, I felt exceptionally relaxed and in control and (if I do say so myself!) think it was one of my tightest, most flowing and consistent sets ever. Maybe drinking three pints of lager on an empty stomach is the answer!


Below: Maila Nurmi (aka glamour ghoul / horror movie hostess Vampira, out of her Morticia Addams-style drag) reciting a poem in The Beat Generation (1959) and wearing a pet rat as a fashion accessory. Sadly, the audio quality not so great on this one. I do love Nurmi's restless, swaying body language in the clip -- like someone on amphetamines. You can watch the whole film on Youtube.


What links these two clips? The presence of character actor Jackie Coogan (Uncle Fester in The Addams Family!) in both. In High School Confidential he's accompanying Fallon on piano; in The Beat Generation he's tough guy / cop Steve Cochran's partner

The emcee this time was Ebeneezer Valentine (think surly Scottish escapee from Trainspotting). There were two burlesque artistes and models: Frankie Von Flirter and Millie Dollar. For Frankie’s first pose I dove into eerie 1950s Cool Jazz (the sound of one finger snapping in an echo-y morgue) with a David Lynch-ian twist, starting with doomed heroin-ravaged Cool Jazz icon Chet Baker’s “You’re My Thrill” (he did a great vocal version of this jazz standard, but at Dr Sketchy I always play the instrumental that appears on his 1965 album Baker’s Holiday: Plays and Sings Billie Holiday. It has a sexy bump-and-grind burlesque rhythm), and then followed it with two songs from Lynch soundtracks. “Up in Flames” appeared in Wild at Heart (1990), memorably sung by raspy-voiced blues mama Koko Taylor. I opted for the more ghostly Julee Cruise interpretation, as featured on her underrated (and long out of print) 1993 The Voice of Love album (I snapped it up on CD at Amoeba Records when I was in San Francisco in April. What a coup!).  Milt Buckner’s slinky “The Beast” (a perennial Dr Sketchy favourite) appears in Mulholland Drive (2001).

In the second half, Frankie appeared in drag king mode for her Top Gun-inspired routine. Because of her military uniform, Clare Marie (Dr Sketchy’s ornately tattooed glamazon promoter) requested military-inspired music for these poses, which explains Dietrich’s “Give Me the Man” (she’s pining for a Foreign Legion soldier, ideally as played by young Gary Cooper in Morocco) and the Sadomasochism-tinged “I’d Love to Take Orders from You” by Mildred Bailey.

I’d never worked with Millie Dollar at a Dr Sketchy before, and I loved her hard-boiled, tattooed old-school stripper persona. Her big number ended with her twirling her pasties individually, and then ensemble – talented woman. Her orange spangly costume (the colour of a tequila sunrise!) had a belly dancer / harem girl look, which inspired me to journey into Middle Eastern / Turkish exotica for her poses: “Turkish Coffee” by Omar Kay, Eartha Kitt’s “Uska Dara”, “The Maharajah of Magdor” by The Blue Echos. (I also like to think I was being timely and topical, and showing solidarity with the Turkish protesters in Istanbul!).

As well as the usual vintage sleaze, I raised the tone a bit by playing some foreign language Continental artistes: France’s Serge Gainsbourg and Juliette Greco, Germany’s Hildegard Knef (I love her world-weary, sixty cigarettes-a-day guttural voice). For one of Millie’s poses I also played Anouk Aimée’s musical number from the key nouvelle vague film Lola (1961). A friend of mine went to Paris recently and kindly brought me back a boxed set of CDs entitled Nouvelle Vague: Chansons et musiques de films, which includes this song. I've always treasured Aimée as one of the most haunting and beautiful of French actresses (I've already blogged about Aimée’s performance in Fellini’s La Dolce Vita – and her sensational cat’s eye sunglasses). She gives her career-best performance in Lola as a naive, love-struck cabaret chanteuse and single mother. Normally Aimée was called upon to be enigmatic, or to suffer eloquently (something her sorrowful dark eyes were ideal at conveying) but in Lola she plays against type, channeling effervescent Marilyn Monroe at her most childlike, and is beguiling. 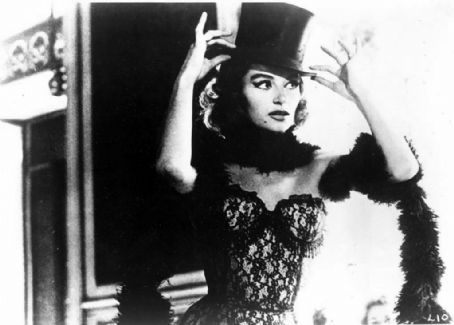 I've always loved Aimée’s delivery of this song in her sexy showgirl outfit – so it was quite disillusioning to get the CD and see that in fact, it’s not Aimée singing at all! It certainly sounds like Aimée's own hesitant, whisper-soft voice, but she’d been dubbed by  professional singer Jacqueline Danno! The liner notes explain that the director Jacques Demy knew he wanted a musical sequence for the film, and filmed Aimée “speak” the lyrics like reciting a poem – and then later on, his composer Michel Legrand knocked-up the accompanying music and Danno painstakingly sang along to Aimée's lip movements so they could be synced. Sounds chaotic, but that’s probably why the best 1960s French nouvelle vague films still feel so fresh, playful and spontaneous: they were cobbled together in a haphazard fashion and on a tight budget. 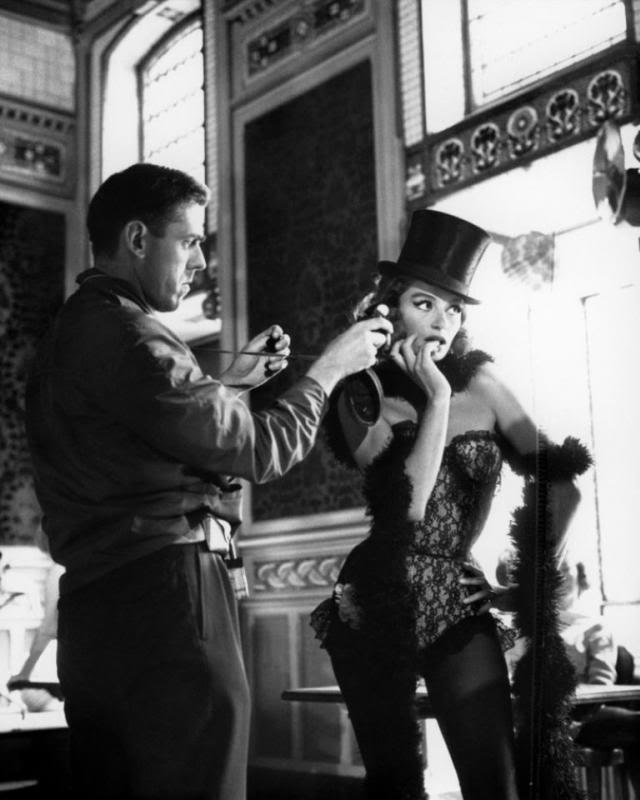 I probably won't be DJ'ing again now until 13 July 2013 -- the next Lobotomy Room night at Paper Dress Vintage! Details here. In the meantime, follow me on tumblr -- although perhaps not from your work PC! (NSFW alert!). 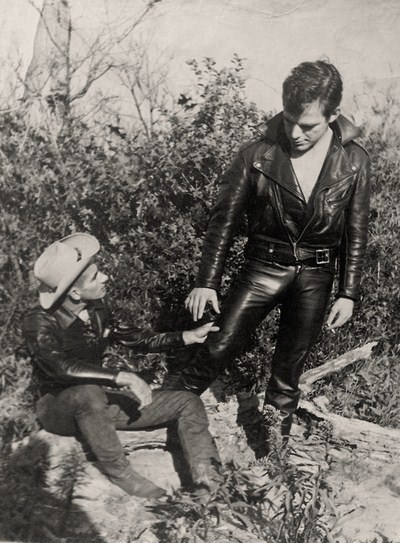 Out of the gutter and into your arms – LOBOTOMY ROOM returns to Paper Dress Vintage! To paraphrase Little Richard: She's got it. Ooh, baby she's got it. Venus Raygun of Empress of Fur (below) shakin' it at London's now-defunct rock'n'roll night Virginia Creepers in 2007. (Photo by me, from my "nightclub photographer" days. I was the Nan Goldin / Diane Arbus of the rockabilly scene for a while!) 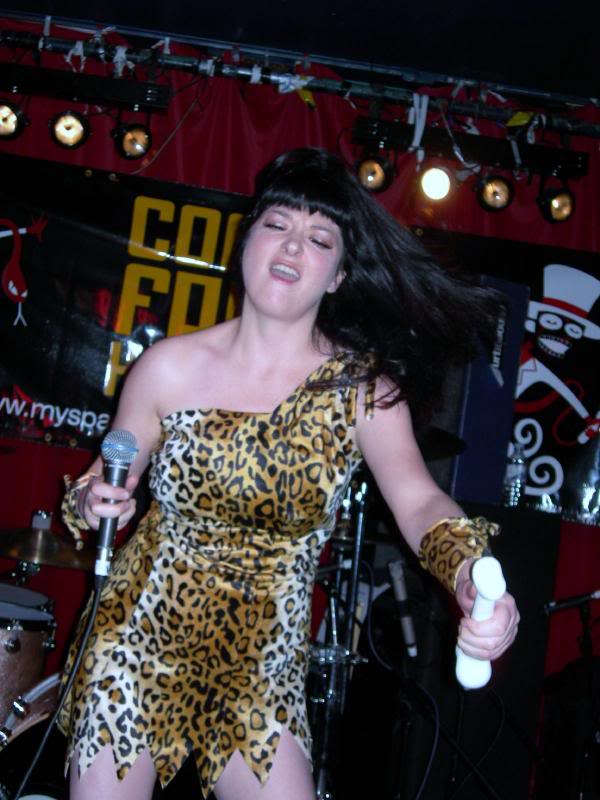 Empress of Fur, the early years: the original line-up as featured in their 1994 EP How Does That Mad Bad Hawaiian Voodoo Grab You? "Johnny Voodoo" is a punkabilly classick!

Below: Venus cavorting at the Dirty Water Club in 2009 (see more from this set on flickr) 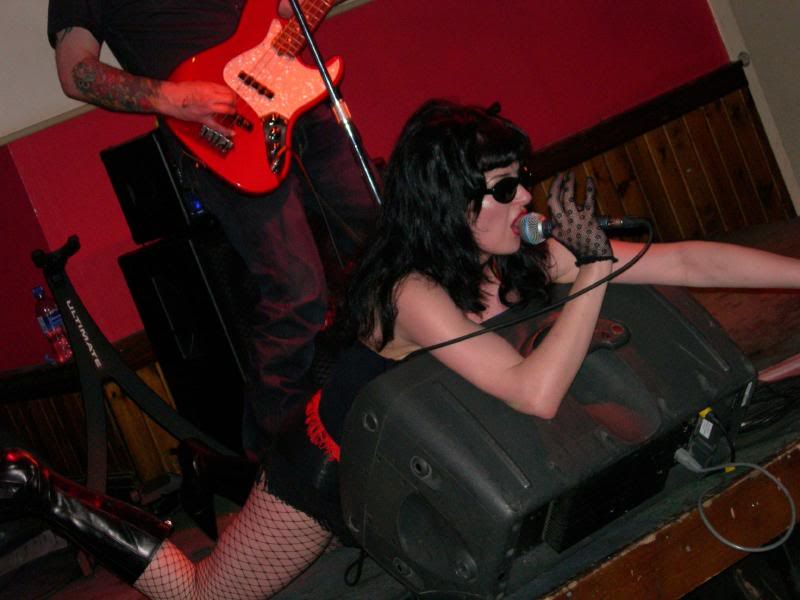 Empress of Fur's Golden Jubilee gig at the 12 Bar Club in June 2012. See the rest of this set on flickr 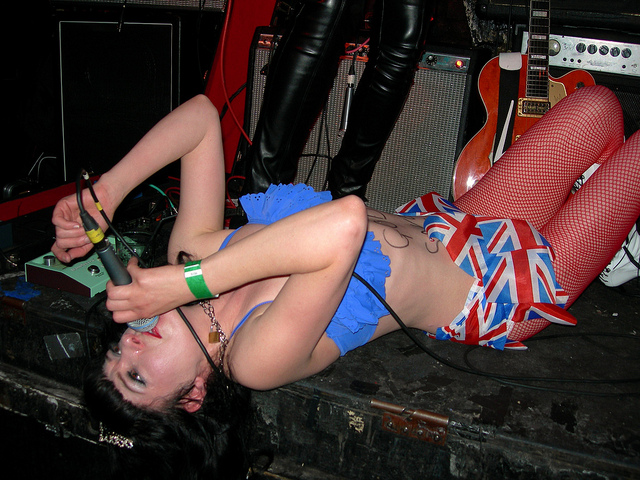 Received delivery of a sparkling new pair of black leather engineer boots earlier this week — just like these as modelled by the delectable vintage physique/beefcake model Rock Granger (sadly, wearing them doesn't make me look like him. Granger is one of my favourite male pin-ups; I used a photo of him in a mesh posing pouch to illustrate my 6 February 2013 Wild Thing DJ set list -- and perhaps unsurprisingly, it became one of my most popular blog entries of all time!).

As many of you know, I freaking refuse to wear anything else (give me engineer boots or give me death!) and they’re increasingly hard to find. (In the 1990s, I’d just head to The Girl Can't Help It in Camden Market!). I always have to have two pairs: I need a spare pair while one is being re-heeled. Anyway, I got my last two pairs from Rockers England in Manchester: highly recommended. Here’s their website. 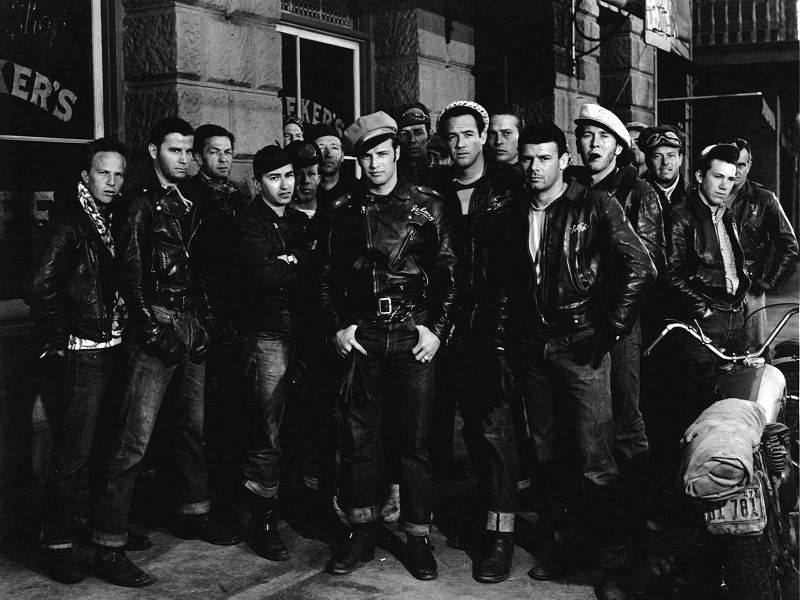 Young Marlon Brando as sullen and defiant Johnny in The Wild One (1953) remains such a potent image (or as Camille Paglia would call it, “sexual persona”). As I've said before, the clothes Brando and his biker gang members in The Black Rebel Motorcycle Club wear are so covetable they have me virtually drooling. The buckled black leather engineer boots, the perfect dark indigo Levis with the perfect turn-ups, the t-shirts, the leather jackets, the caps, the sunglasses, the quiffs, the sideburns ... Brando and his gang remain the absolute visual / sartorial ideal for male rockabillies today in the way that, say, Bettie Page or Mamie Van Doren do for female rockabilly kittens.

Unwittingly, Brando in The Wild One also set a template or archetype for the enduring and essential homoerotic biker image (perhaps second only to the homoerotic sailor image in ubiquity). Browse through any collections of 1950s / early 1960s-era vintage male physique / beefcake / early gay pornography on tumblr like this one or this one (and I highly recommend you do!) and so many of the luscious male models are sporting tough guy / bad boy variations of the black leather jacket, rakishly cocked biker cap and engineer boots ensembles that seem directly swiped from The Black Rebel Motorcycle Club. (Here -- I've saved you the trouble!). And of course in his eerie 1963 queer underground film classic Scorpio Rising (a true cinematic flower of evil!) Kenneth Anger would drag the gay biker persona up from the subterranean world of porn. Anger also deliberately spliced in a flickering black and white TV clip of Brando in The Wild One, implying his speed freak anti-hero Scorpio (played by Bruce Byron) is modelling himself on Brando. In fact he links Scorpio’s corrupt homoerotic narcissism with his identifications with James Dean and Brando. Beautiful!

Now I need to listen to Turbonegro.
Posted by bitter69uk at 13:50 No comments: