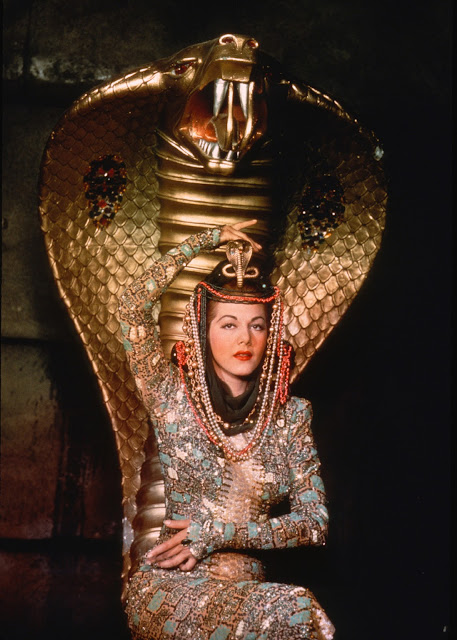 / Pagan witch - no man could resist or subdue! /

Call it a South seas adventure. A pagan sensation. An epic kitsch extravaganza. A so-bad-it’s-GREAT camp classic! For the March Lobotomy Room film club, we’re presenting Cobra Woman (1944)! Wednesday 20 March 2019!Thickly-accented Queen of Technicolour Maria Montez stars in a dual role as twin sisters of the tropics vying for love! One is virtuous, one is evil! Venomous in hate, rapturous in love! In a story containing all that you desire in romance and adventure! See the horror of masses terrified by the power of King Cobra! See the thrill of sinuous beauties in the dance of the snakes! All the matchless thrills of fiery adventure! All the forbidden wonders and dangers of the tropics! Witness snake worship! (Including some frankly rubber-looking ones!) Virgin sacrifice! Harem dancers! Erupting volcanoes! Nubile leading man Sabu frolicking in nothing but a skimpy loincloth! And best of all, a monkey threading a needle! Your mind will boggle! Hail King Cobra!Lobotomy Room Goes to the Movies is the FREE monthly film club downstairs at Fontaine’s bar (Dalston’s most unique nite spot!) devoted to Bad Movies We Love (our motto: Bad Movies for Bad People), specializing in the kitsch, the cult and the camp! Doors to the basement Bamboo Lounge open at 8 pm. Film starts at 8:30 pm prompt! 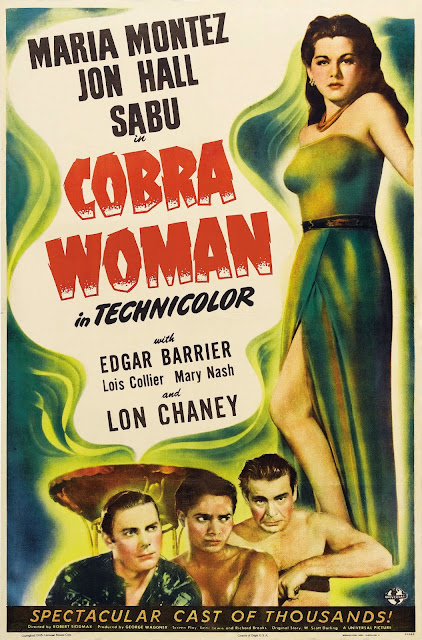 / The following is a jumble of my onstage introduction to the film plus a sprinkling of some fun factoids and further reflections on Cobra Woman. / 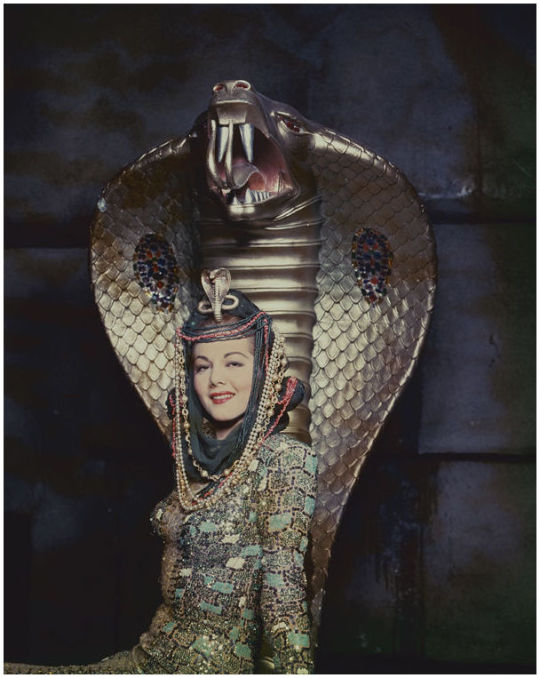 In her prime, Dominican Republic-born screen diva Maria Montez (1912 - 1952) was hailed as both “the Caribbean Cyclone” and “The Queen of Technicolour.”  She starred in a wildly popular series of lavish and exotic costume adventure films for Universal Studios in the 1940s with titles like Arabian Nights (1942), White Savage (1943), Ali Baba and the Forty Thieves (1944) and Siren of Atlantis (1949) that offered escapism for audiences during World War II. Montez’s stardom was ultimately short-lived, and her movies were subsequently either forgotten or dismissed as trash. 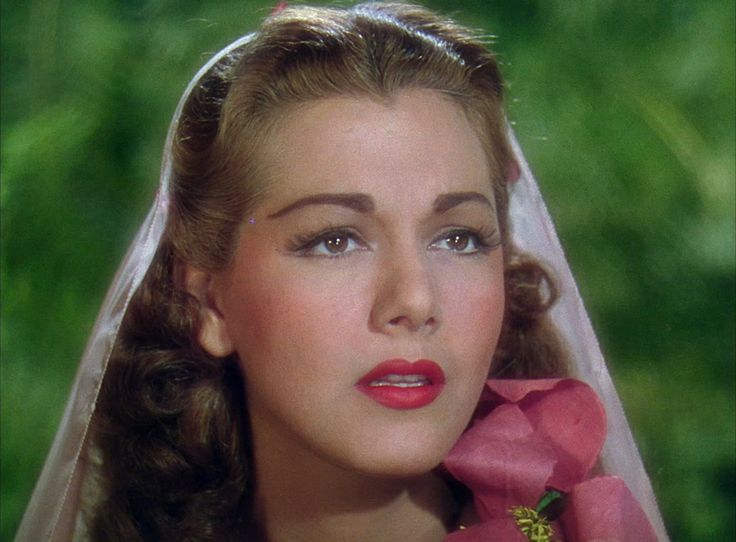 / Radiant close-up of Montez in Cobra Woman, justifying the title "Queen of Technicolour" /

In the intervening decades, though, Montez became venerated as a pivotal figure in the sensibility we now define as “camp” or “kitsch”. She was revered as one of the original gay icons for the post-war generation of the 50s and 60s, who embraced her films as “so-bad-they’re-good” guilty pleasures. Her admirers also included leading queer artists, filmmakers and writers like Kenneth Anger (who has reportedly cited Cobra Woman as his all-time favourite film), Andy Warhol, Gore Vidal (Montez figures prominently in his 1974 novel Myron) and Jack Smith (whose films like Buzzards over Bagdad, I Was a Male Yvonne De Carlo and Flaming Creatures were directly inspired by Montez’s oeuvre). In fact, long before Candy Darling, Jackie Curtis and Holly Woodlawn, the original underground drag queen actor in the art films of Jack Smith and Warhol was René Rivera (1935 – 2013), a Puerto Rican mailman re-christened “Mario Montez” in tribute. 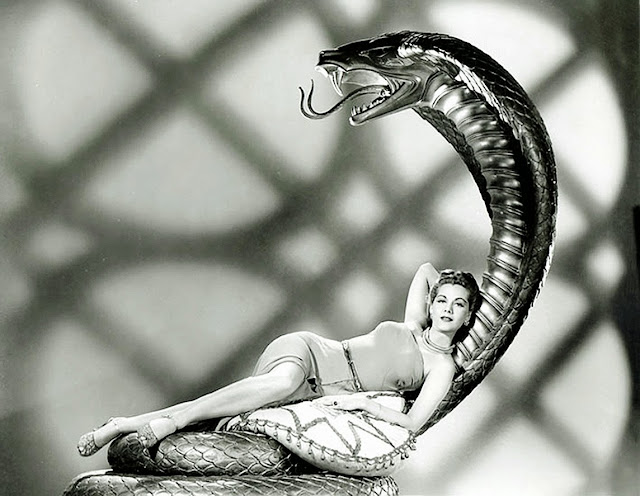 When Montez’s Hollywood career dried-up, she and her husband (suavely handsome French actor Jean-Pierre Aumont) re-located to Paris. Sadly – like a casualty straight out of Kenneth Anger’s Hollywood Babylon – she was destined to die young. As Penny Stallings concludes in her 1978 book Flesh and Fantasy, “Maria Montez had a reputation for being for being impossible to handle. After a number of years in Haji-Baba type adventures, she was dropped by Universal and forced to seek work in European cheapies. While in Europe, she attempted to counter her advanced state of avoirdupois with hot saline baths. She died in one of a heart attack at the age of thirty-one.”  (Actually, Montez was 39 – like any self-respecting star, she was creative with her birth year). 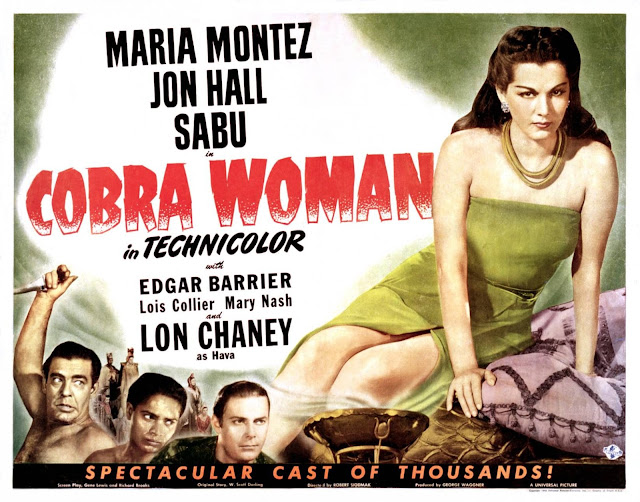 In a bizarre coincidence, Montez’s co-star in Cobra Woman, Sabu (1924 – 1963) would also die aged 39 of a heart attack.  Seen today, the doe-eyed and beauteous Sabu is particularly interesting because he was perhaps the sole Asian and Muslim major celebrity of Golden Age Hollywood. (His other notable films include The Thief of Bagdad (1940), The Jungle Book (1942) and Black Narcissus (1947).  As with Chinese-American star Anna May Wong in the 1930s, the frankly racist dictates of the era limited the types of roles Sabu could play (in the Production Code there could be no hint of interracial romances depicted onscreen, for example) and he continued to portray “primitive” child-of-the-Islands stereotypes well into his thirties. (This is not meant as a diss on Sabu – he performed these parts with genuine aplomb and innate dignity). 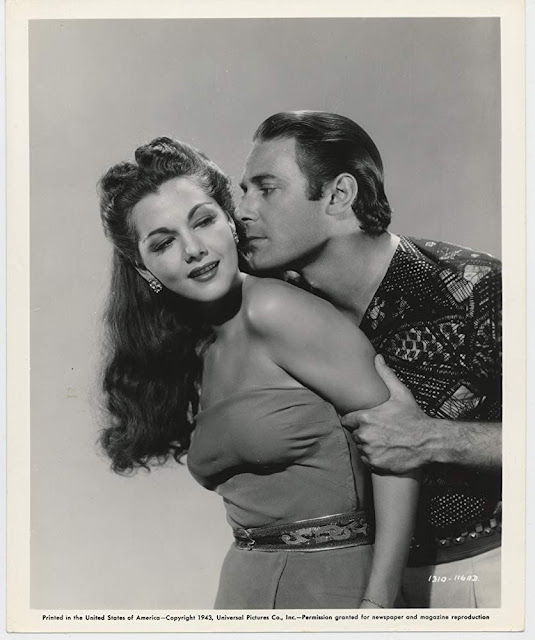 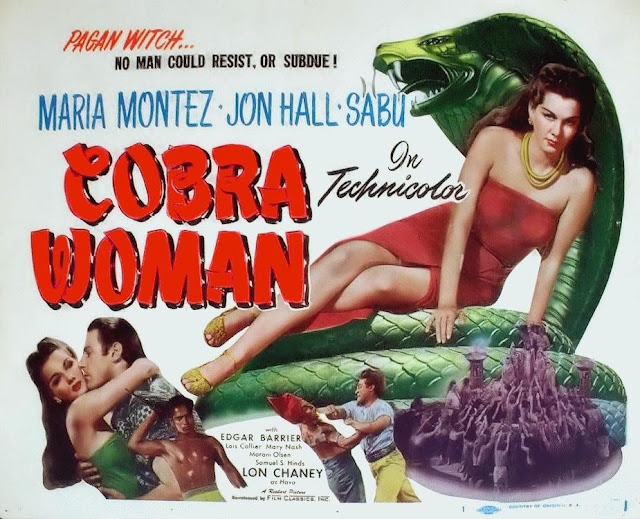 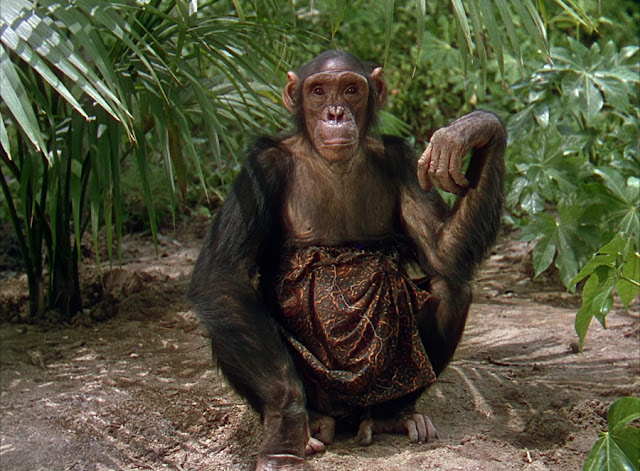 Deride it as a trashy mess, call it frequently slapdash – but Cobra Woman is always wildly entertaining. As AllMovie speculates, “Looking at it in the 21st century, one wonders if it was ever seen by Edward D Wood Jr; not only does the production sort of anticipate (albeit on a much higher level and budget) his work in the adventure genre, but the script seems to contain the essence of inept moments that he would elevate to an art of sorts. And one can just imagine Wood, as a young marine recruit, watching Cobra Woman eagerly and "learning" all the wrong lessons from its writing and production. But, like the best of Wood's movies - only more so - Cobra Woman is still great fun of the "guilty pleasure" sort.” 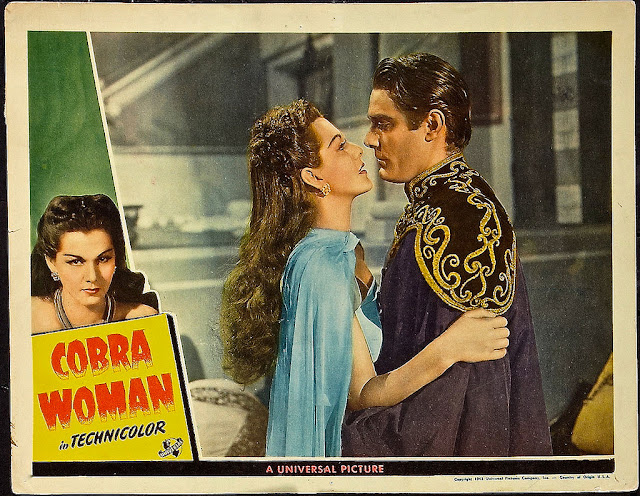 Not that Robert Siodmak (Cobra Woman’s director) was a hack. The German filmmaker would subsequently helm genuinely great, stylish and acclaimed films noir like Phantom Lady (1944), The Killers (1946) and The File on Thelma Jordan (1949). I wonder if he was ever tempted to scrub Cobra Woman from his résumé? 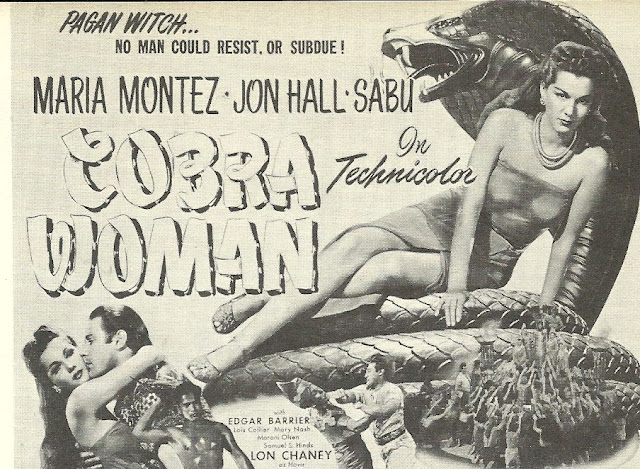 Alongside “What the fuck?”, one of the questions that may occur to you watching this is: when and where are the deranged antics of Cobra Woman meant to be occurring? Obviously, verisimilitude was not a priority, but the inhabitants of the remote Cobra Island are certainly wildly multicultural, encompassing people with Indian (Sabu), Spanish (Montez) and American (Hall) accents – as well as Scottish (!) and those who seem to be declaiming in refined high falutin' Shakespearean English (Mary Nash as the queen of Cobra Island and the grandmother of separated twins Tollea and Naja). Lon Chaney Jr gets off easily – he plays a mute. The costumes – a crazy, all-purpose exotica mélange of turbans, capes, sarongs, harem pants, loincloths and sparkly bathing suits - certainly offer no clue. Some of Montez's headgear is worthy of Carmen Miranda. Some characters look vaguely Aztec or Incan. Some of the male soldiers resemble ancient Roman centurions. Others look like they’re en route to a 1944 cocktail lounge! The criteria seemed to be: raid whatever was vaguely “historical” in the wardrobe department. 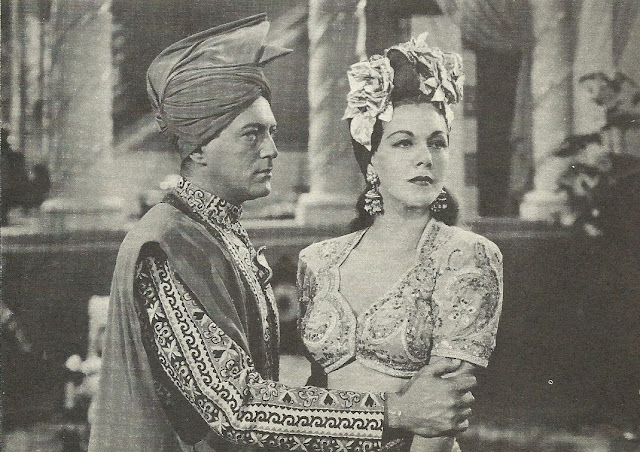 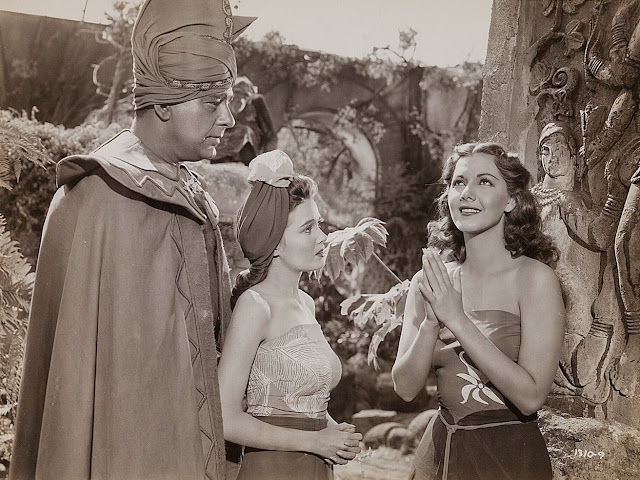 Seen today, Cobra Woman also feels vividly queer. There are certainly striking homoerotic elements. The hunky Jon Hall suggests one of George Quaintance’s idealized beefcake illustration come to life. As nubile South Seas twink Kado, Sabu sports nothing but a skimpy loincloth and a sheen of baby oil throughout and the camera lingers on his sculpted physique. (We also get to see him tied-up in bondage!). Perhaps the most convincing love story in Cobra Woman isn’t between Montez and Hall, but between Hall and Sabu, who genuinely seems to pine for him in the calf-eyed way that Sal Mineo later moons for James Dean in Rebel Without a Cause. (I kept hoping they would kiss). And – spoiler alert! – the concluding shot is pretty much a close-up of Sabu’s ass! 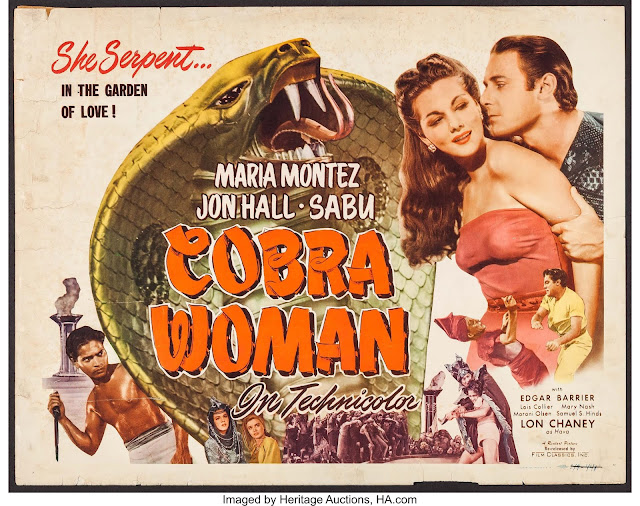 In Cobra Woman, the nostril-flaring and tempestuous Montez gets to play one good sister (Tollea) and one evil sister (Naja). Inevitably, the evil sister is a lot more fun. While not a “good” actress by any conventional standard, she is undeniably compelling. Montez approaches the ridiculous scenarios with complete conviction and a genuinely royal poise (no wonder drag queens loved her!).  As  Siodmak would later shrug, Montez "couldn't act from here to there, but she was a great personality and she believed completely in her roles". 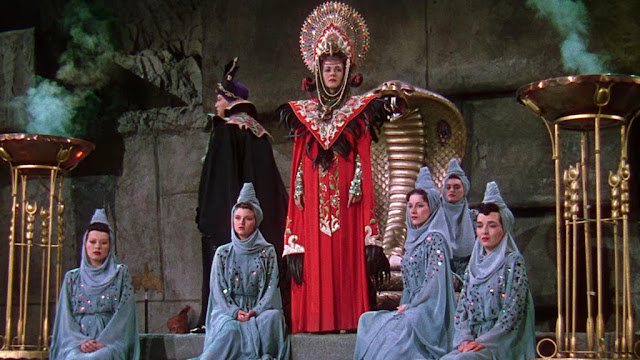 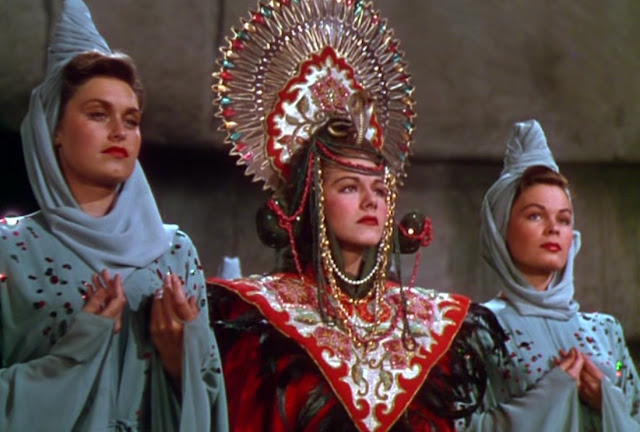 By all accounts, the frankly temperamental Montez gleefully relished being a movie star and that pleasure is tangible on the screen. With a commendable lack of self-modesty, when she first viewed herself in the film Arabian Nights, Montez reportedly gasped, “When I look at myself, I am so beautiful I scream with joy!” Maria Montez – you make me scream with joy! It was heartwarming to see the audience enthralled by Cobra Woman at Fontaine’s, and I predict they will be doing imitations of Montez declaring “I have spoken!” and “Give me that cobra jewel!!” for the rest of their lives. 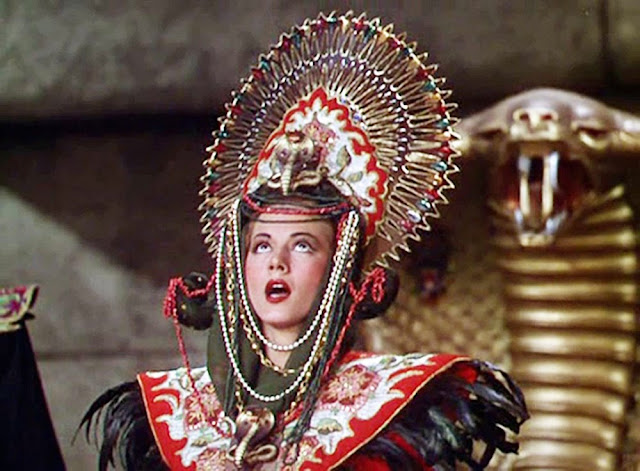 “After her adoring audience had grown up, they discovered that Maria Africa Vidal de Santos Silas hadn’t done her own singing (she was dubbed), nor her own dancing; her abilities as an actress were also put into question, but her spell was not tarnished. Maria Montez was still the madly glamorous “Queen of Technicolour.” What her roles (all of them variations of Scheherazade in slumberland) required were ingredients she had a surplus of: statuesque bearing, regal demeanor, fiery beauty and best of all, an unassailable confidence in herself. When one weighed all the things she couldn’t do against the things she did so well, the balance came out in her favour.”

A nice appreciation of Montez as a camp / queer icon and her influence on the underground cinema of Jack Smith,

In August 2018 I spoke my brains to To Do List magazine about the wild, wild world of Lobotomy Room, the monthly cinema club – and my lonely one-man mission to return a bit of raunch, sleaze and “adult situations” to London’s nightlife! Read it - if you must - here.