Grace in Your Face! Grace Jones in London 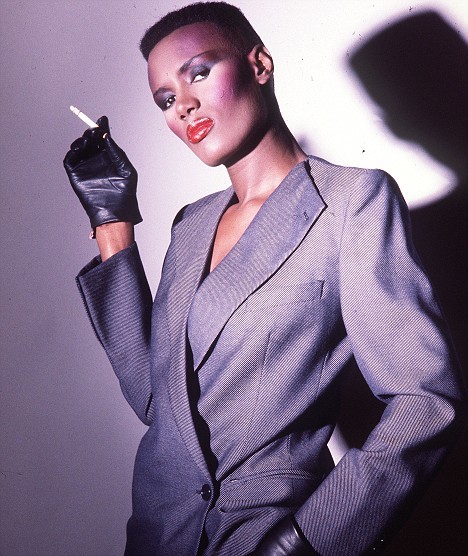 / "I was born … I came out of my mother feet first. I arrived kicking and pissed off, sticky with fury, soaked to the skin. I was what’s known as a stargazing fetus as well, my neck fully extended. From the very beginning I was going against the grain and making trouble.” Excerpt from I'll Never Write My Memoirs, 2015 /

“Late one night last week, after dreamily listening to the great Dinah Washington on my car radio, I was knocked out to hear the inimitable voice of Grace Jones come crackling out over a Caribbean/Mediterranean/Eurodisco beat I'd never heard before. It was "Pars," sung by Grace in moody French. .. Recorded in 1980, "Pars" still sounds utterly fresh.  What an extraordinary pop personality Grace Jones was! Oh, how I'd love to see that mannish battalion of glowering, stylish Jones clones in the "Demolition Man" video tread and trample on today's simpering crop of Zellwegger-Paltrow-Diaz-Flockhart wimpettes.... Amazing Grace, pagan diva!” Pop culture provocateur Camille Paglia writing in one of her Salon.com columns in 1998.

So ... I had a fleeting encounter with post-punk freak diva extraordinaire Grace Jones recently!

The Jamaica-born tigress was signing copies of her autobiography I’ll Never Write My Memoirs at the big Piccadilly branch of Waterstone’s on 12 November. It was meant to start at 5 pm. I got there at 6 pm after work and was advised by a Waterstone’s employee Jones herself had just arrived – which counts as being early by Jones’ notorious standard. 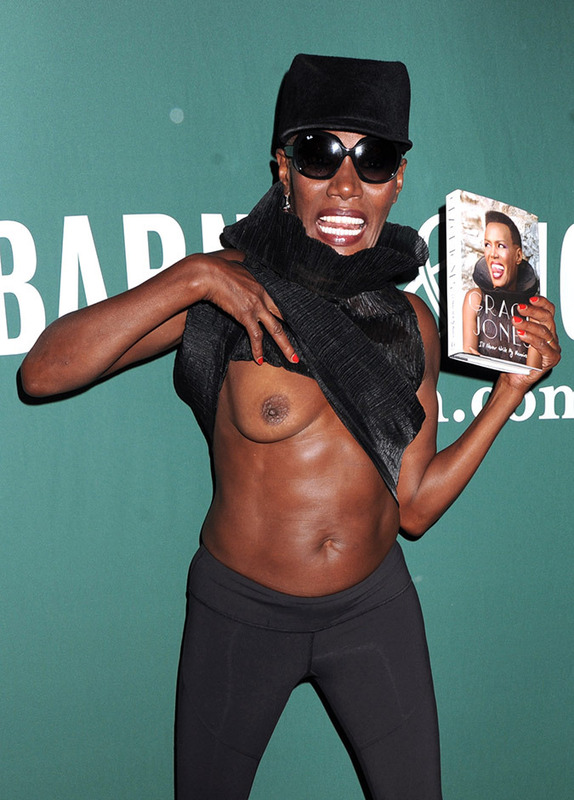 / Jones was on her best behavior in London.  For her book-signing session at Barnes & Noble in New York in October, she rocked-up two hours late - and flashed her "raspberry ripples" to the awaiting photographers /

As each of us in the queue gradually filtered into the room and caught our first glimpse of the Afro-Dietrich and panther-in-human-form seated at the table we all gave an involuntary gasp. Up close, the 60-something Jones (she’s vague about her precise age. She’s meant to be 67 in human years) is jaw-droppingly, eye-poppingly exquisite beyond belief and preternaturally ageless. She was wearing a skimpy, flesh-exposing black dress and a dramatic black 1920s flapper-style hat. Beautiful gleaming white teeth, chiselled bone structure worthy of Nefertiti and the most glowing unlined dark mocha skin (especially around the décolletage. Yeah, you better believe I checked it out).

It was like an assembly line designed to move us past Jones with our signed copy of the book as fast as possible. She was surprisingly un-intimidating: Jones is famous for that haughty dominatrix-from-outer-space persona but in person she exudes warmth and was smiling the whole time. But what charisma: it’s probably the equivalent to meeting the likes of Marlene Dietrich or Josephine Baker in their prime. When it was my turn, I’m pretty sure she called me “darling” when she glanced up at me. I quickly asked her when her long-awaited new CD is due out and – straight from Jones’ mouth – was told spring or summer 2016.

Sadly photography was strictly forbidden – and it was strictly enforced by security men dotted around the room. Everyone there was itching to get a shot of Grace and the guards were quick to pounce as soon as someone tried to aim their iPhone in her direction! The closest to a shot of Jones I could get was this when a striking hardcore male fan in immaculate Grace Jones drag rocked up to join the queue. Taking photos of him was permitted! In retrospect, I should have waited around to see Jones’ reaction when she came face-to-face with her adoring lookalike. 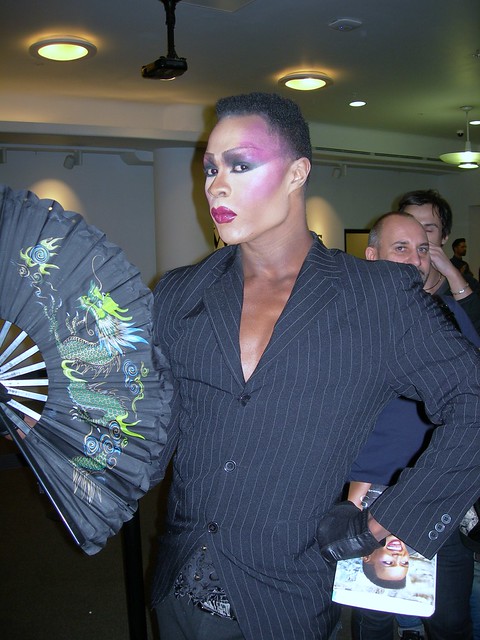 / OK not a photo of Grace Jones - but a very close facsimile! Kalypso Bang at Grace Jones' book signing. 12 November 2015 at the Piccadilly branch of Waterstone's in London / 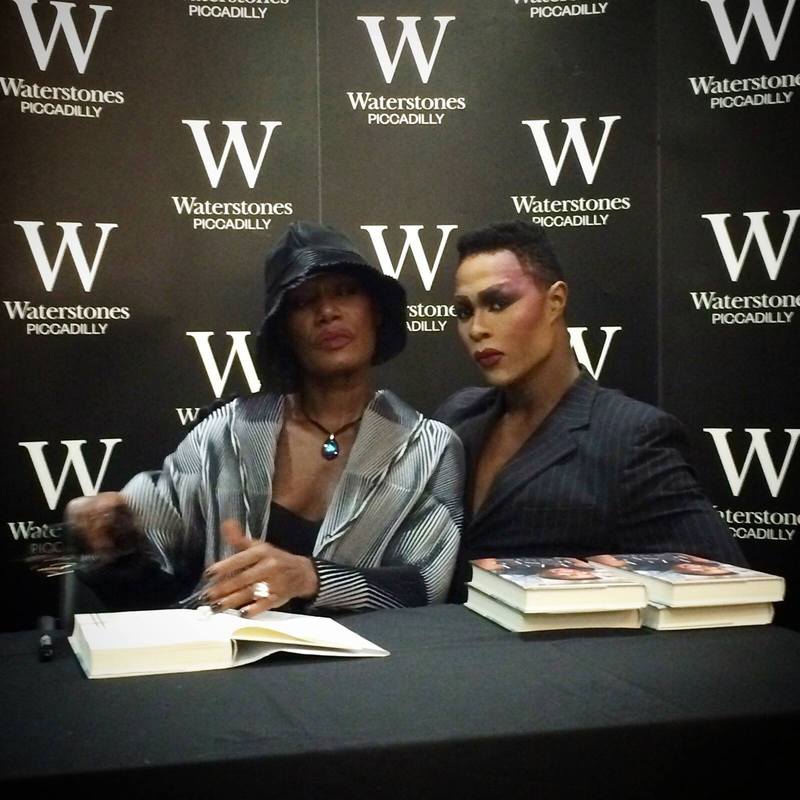 / Right! I subsequently learned the fan in Grace Jones drag is called Kalypso Bang. And I've shamelessly swiped this shot from his Facebook page! This happened after I split. I'm so glad they loosened the "no photos" rule so this meeting could be documented /

Some of my favourite excerpts from I'll Never Write My Memoirs:

“I met Marianne Faithfull that New Year’s Eve (1977). She once said she never hung out at Studio 54, that she didn’t have the clothes or the desire. She was definitely there, though, unless I’m making it up. Maybe it was the only time she went. I remember it well, because that was the moment she introduced me to Cocoa Puffs: marijuana cigarettes laced with cocaine. I would call them Mariannes, because she was the first person I smoked them with.” 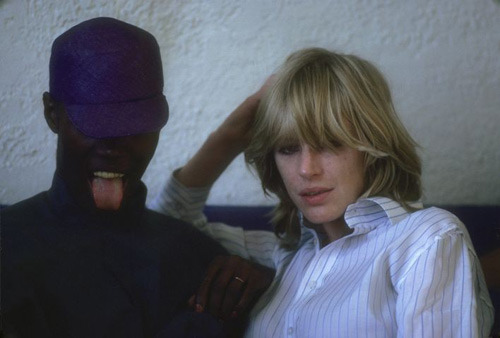 / This shot is from a few years after their Studio 54 encounter, when Jones and Faithfull were Island Records’ reigning bad girls / art-punk divas in the New Wave-era. I've loved the music of these two since I discovered them in my teens. I continue to listen to both Jones and Faithfull to this day /

"With Richard (Bernstein), I had played with the Marlene Dietrich imagery, my head on her body in the sailor suit. Jean-Paul (Goude) saw me as the black Dietrich. There was something about the idea of her he wanted to update ... I had a friend, Patrice Calmettes, who managed at (Parisian nightclub) Le Palace after Fabrice died. Patrice and I are very close, and he was close friends with Marlene Dietrich. When I was with him one night he put me on the phone.  I said “Hello” in my usual deep voice. And she said, “Well, you sound just like me.”  It was close to the end of her life and she had become a recluse – she didn’t leave her apartment or speak to many people. Patrice was one of those she still spoke to. Our conversation was very brief: “We have the same voice,” she purred. She wished me all the best." 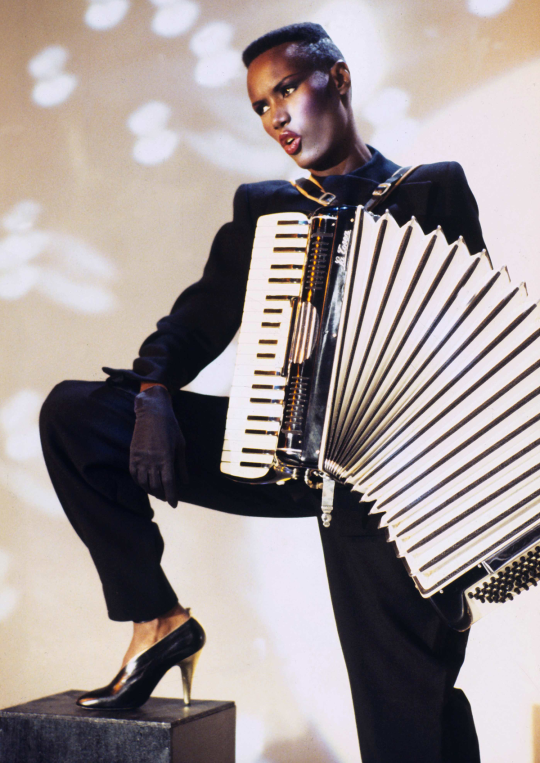 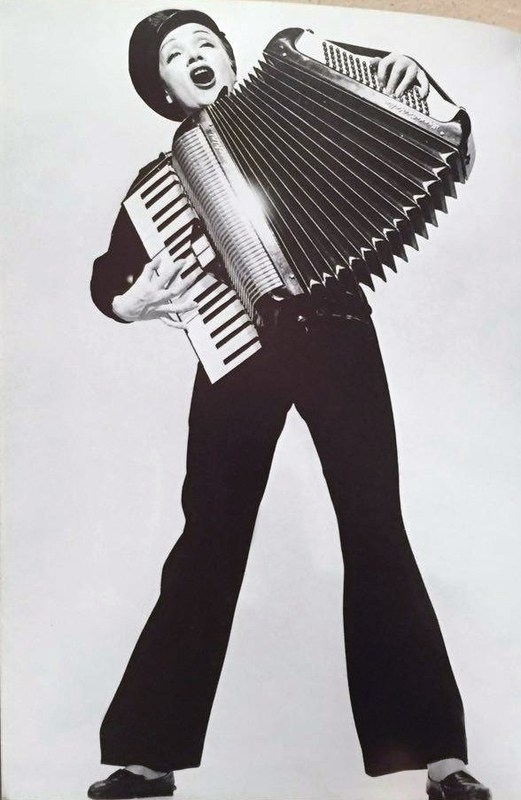 I blogged my account of seeing Jones perform at the Royal Albert Hall in 2010 here.

Check out my photos of Jones performing at The Roundhouse in Camden in 2009 here. 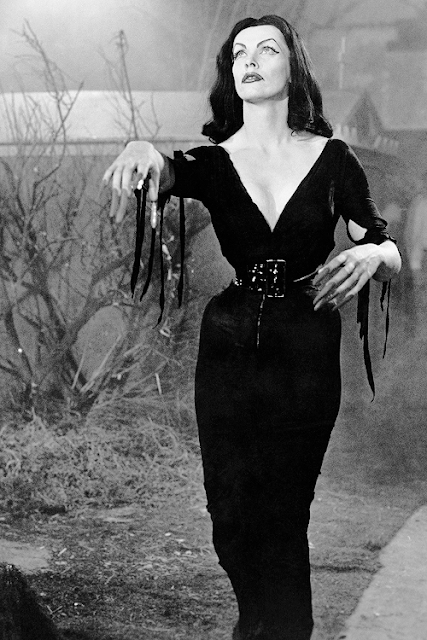 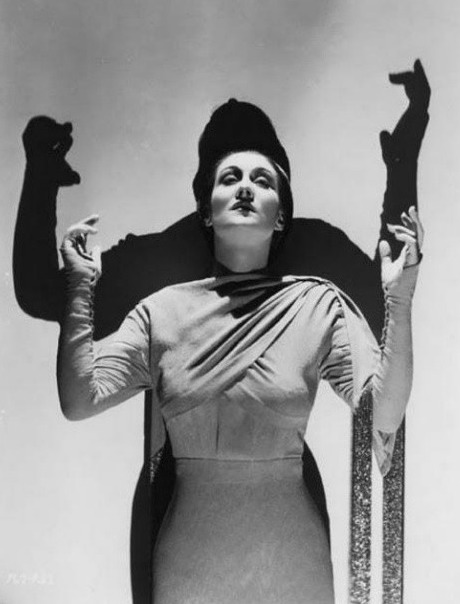 Lobotomy Room (my monthly punkabilly booze party! Wild! Wild! Wild!) is, of course, usually located in the subterranean Bamboo Lounge in the basement of Fontaine’s. That was reserved for a private party this night, so I moved upstairs to the plush Art Deco splendour of the ground-floor bar with the silver-painted palm trees. Although the lighting was dark and Fontaine’s was decorated for Halloween, it still felt like I was dragging the elegant 1930s surroundings down to my putrid level. The only downside to re-locating upstairs: I couldn't project my usual vintage erotica 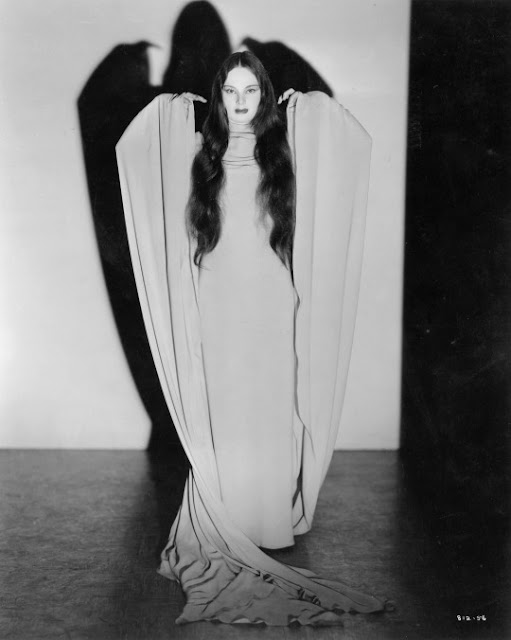 / Morbidly beautiful cadaverous cutie / glamour ghoul pin-up, part three: Carroll Borland (1914 - 1994) as Luna Mora, eerily silent vampire daughter of Count Mora (Bela Lugosi) in horror movie classic Mark of The Vampire (1935). As Luna in her trailing white funeral shroud, Borland created the archetype of the sexy female vampire, paving the way for everyone from Morticia Addams,Vampira , Lily Munster and Elvira. She also may well have been the original goth! /

I didn’t particularly market this Lobotomy Room as a Halloween party (for one thing, Fontaine’s already had a Halloween-themed night lined-up for Halloween proper the following night). But how could I miss the opportunity to exhume a couple of kitsch atomic-era Halloween novelty songs? I played two tunes by campy 1950s horror movie hostess Tarantula Ghoul (well, the A side and B side of her only single!). In a just world, Ghoul’s “Graveyard Rock” would be celebrated as a Halloween perennial just like Boris Pickett’s “Monster Mash” (which I brought and totally intended to play – but forgot!). No one can resist the theme tunes from TV’s The Addams Family (those finger snaps!) and The Munsters (that twangy surf guitar!).  I also dug up some macabre tittyshaker instrumentals with blood-curdling screaming and groaning (“Rigor Mortis” by The Gravestone Four, “It” by The Regal-aires).  Playing something by The Cramps – The Addams Family / Munsters of punk and a band for whom every day was Halloween – was obviously compulsory.  (To embrace the spirit of things, I also wore the Vampira t-shirt I bought at Viva Las Vegas in April 2015). 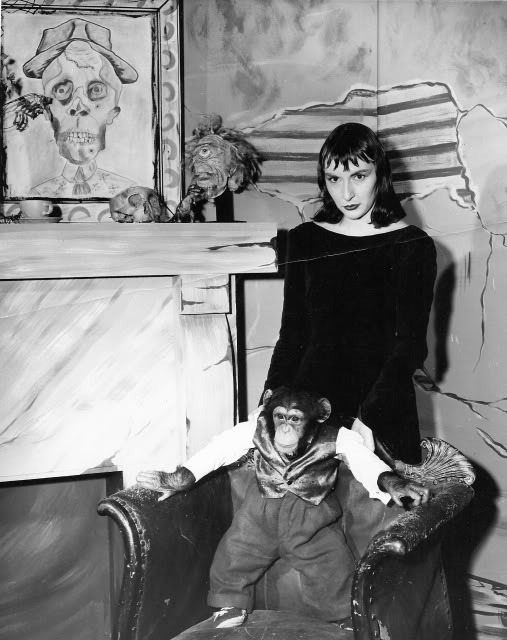 Otherwise I aimed to keep things characteristically weird’n’sleazy. As per usual, I worked in my “chicken suite”, desperate rhythm and blues, foreign language cover versions (I’ve had a CD by vivacious Brazilian 1960s pop siren Wanderléa for years from when I used to have a Brazilian boyfriend. I don’t know why I’ve never used it DJ’ing. I love her berserk Portuguese-language rendition of Ike and Tina’s “River Deep Mountain High”. It’s so wrong it’s right) and some cooing 1960s “white girl with problems” singers via the cinema of Kenneth Anger, John Waters and David Lynch. In honour of what would have been the recent 70th birthday of The Queen Mutha of us all, I played a track by Divine (19 October 1945 – 7 March 1988). Suitably for Halloween, the song in question – “Hard Magic” – features some howling werewolf sound effects. And not one but two punk freak-outs by wacky German New Wave diva Nina Hagen: I’m on a one-man mission to have her reappraised as a genius unsung maverick post-punk outsider artist somewhere between a white Grace Jones and Klaus Nomi. (Trust me: this is a very lonely pursuit). 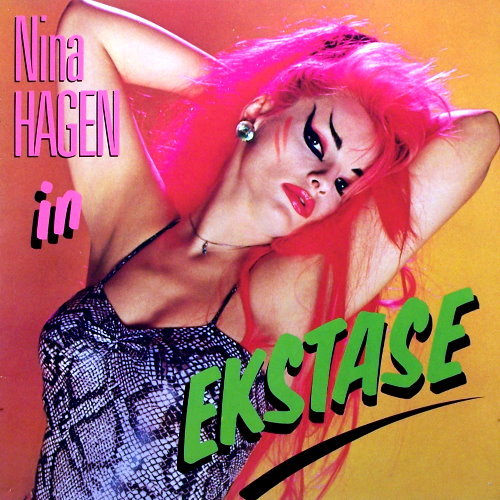 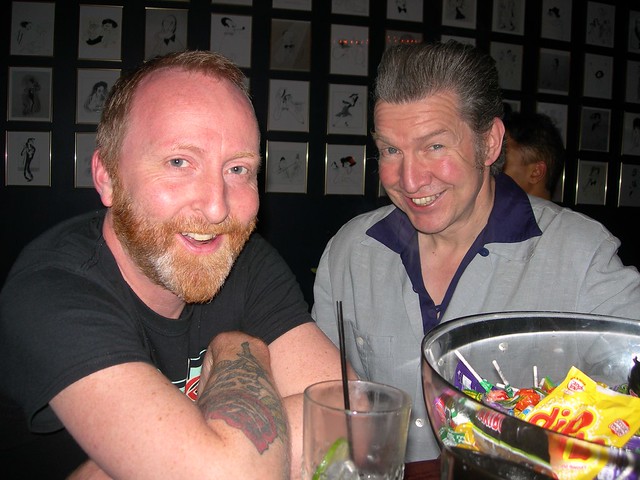 If you don't already, follow me on tumblr here. Warning - NSFW to the max!

And remember ... the next Lobotomy Room is Friday 27 November! Facebook events page here. 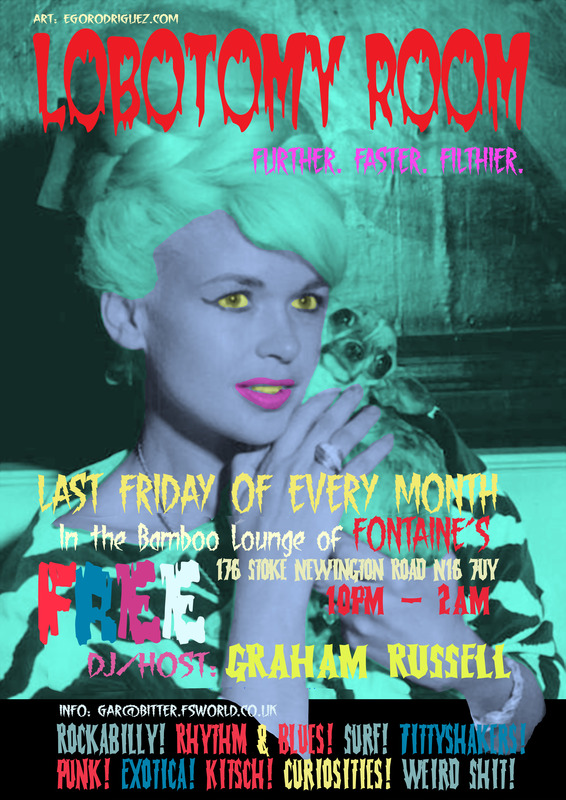 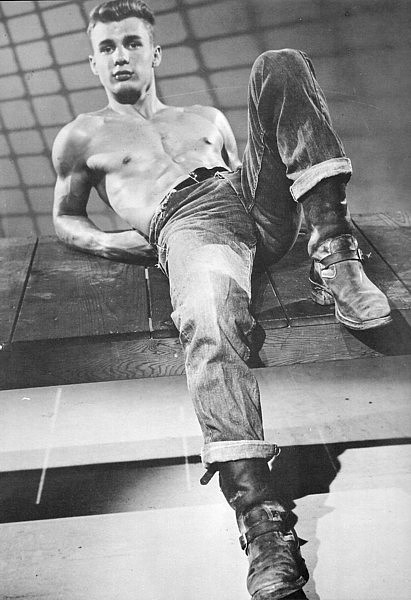 
Drag a comb through your quiff, swallow a fistful of bop pills and rock around the cock – at COCKABILLY!
COCKABILLY returns to the louche surroundings of The George & Dragon in Shoreditch on Thursday 29 October 2015! Leather boys, gay greasers, cry-babies, prison wives and juvenile delinquents of all ages are welcome at Cockabilly - London’s only regular queer rockabilly night! With DJ Mal Nicholson and I spinning all your favourite rancid vintage sleaze classicks! Think rockabilly, rhythm and blues, surf, punk and tittyshakers! 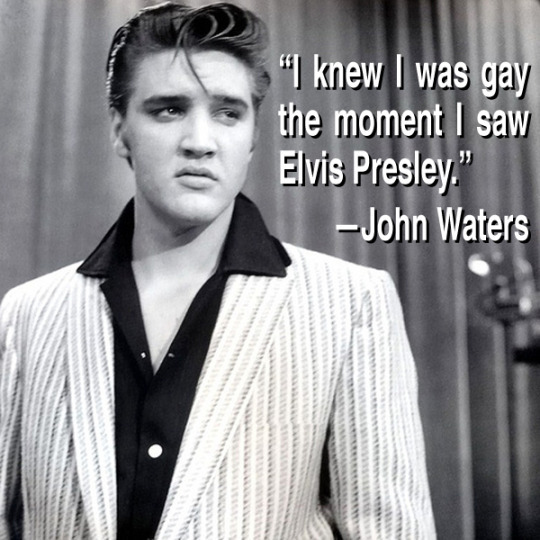 Unbelievably, this was the first Cockabilly I got to DJ at since July 2015! For various reasons (being in Canada, job interviews the next day, etc) I had to skip the August and September ones. This is what I played in my concise and twang-y set! 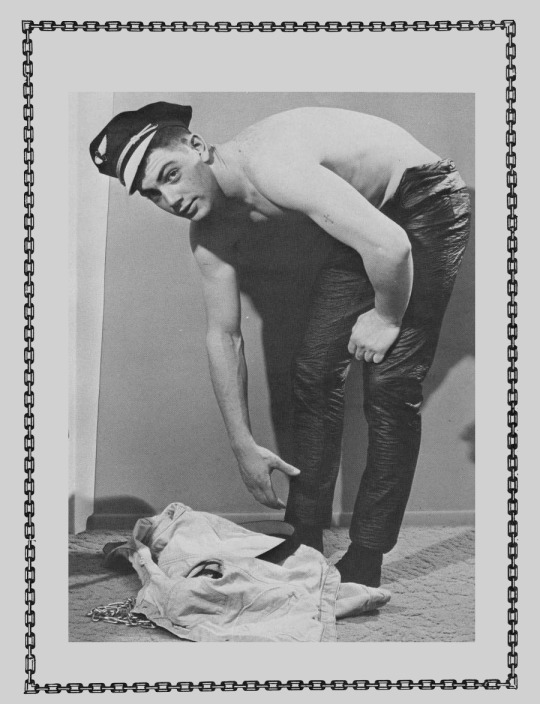 Lobotomy Room is, of course, my own Mondo Trasho punkabilly booze party last Friday of every month at Dalston's Art Deco boîte de nuit Fontaine's. (In Fontaine's basement Tiki-themed Bamboo Lounge, to be precise!). The next one is Friday 27 November 2015. Before that: I'm tentatively tip-toeing into hosting a low-key monthly film club - with an emphasis on camp, queer and cult curiosities - in the Bamboo Lounge called "Lobotomy Room Goes to the Movies!" If it succeeds, it will be the last Tuesday of every month. Admission is free. The debut film night is Tuesday 23 November and the first film will be the torrid Marlene Dietrich vehicle Seven Sinners (1940). Full details can be found here. 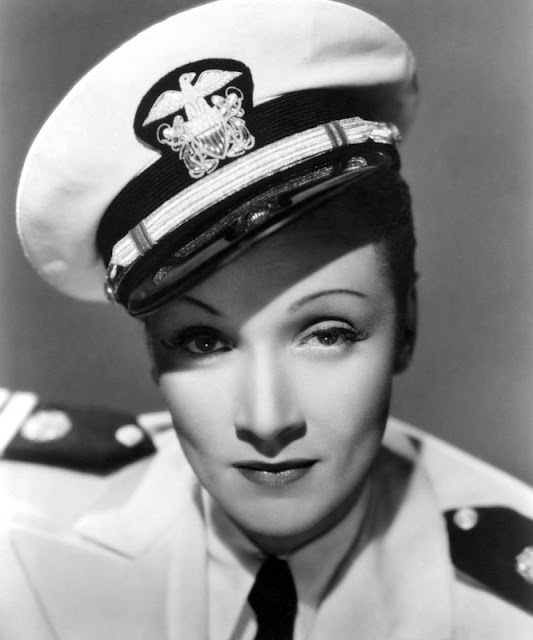 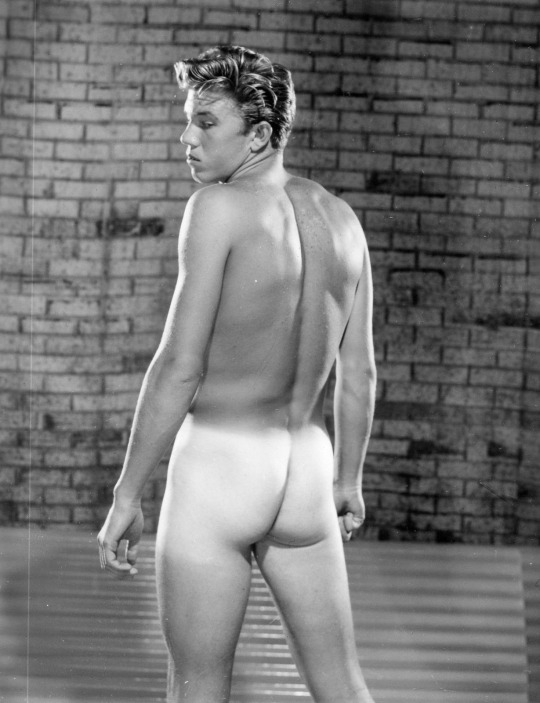 / And finally: in the spirit of Cockabilly, to reward all you aficionados of firm male flesh for reading this far - some totally gratuitous vintage beefcake nudity! Catch you next time /