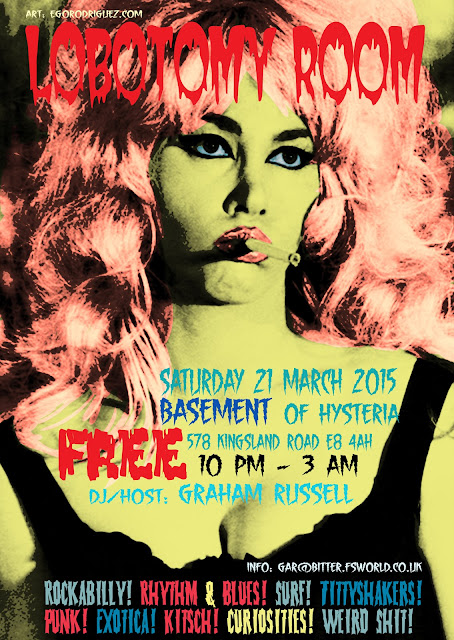 / The cover girl for the 21 March 2015 Lobotomy Room is the enigmatic Gertrude Forstner (stripper name: Lady Chinchilla). Between burlesque engagements (she was famous for her savage “cage act”) she was French sex kitten Brigitte Bardot's screen stand-in. Read more about Lady Chinchilla here /

Skulk in the depths of drunken depravity - at LOBOTOMY ROOM!

Gay greasers, cry-babies, prison wives and juvenile delinquents of all ages are welcome at LOBOTOMY ROOM! The semi-regular cult club night returns to the suitable environs of a low-ceilinged subterranean sex dungeon basement in Dalston (aka downstairs at Hysteria)! No musical guests this time – just me playing all your putrid vintage sleaze favourites until you’re losing your mind!

All this and admission is gratuit. (That’s French for FREE!)

/ This Lobotomy Room coincided with the birthday of "King of the Nudies", breast-fixated maverick film director Russ Meyer (21 March 1922 - 18 September 2004). I interpreted this as a good omen - and was right! Here is the delicious Lorna Maitland shakin' it in Meyer’s boob-tastic 1966 masturpiece (sic) Mondo Topless /

When I got home, I was puttering around getting ready to DJ later and gradually started feeling increasingly, dramatically rough. It kept getting worse until next thing I knew I was hugging the toilet bowl dry-heaving - and then projectile vomiting my lungs out! So odd, as I rarely get sick. (In retrospect I can confirm it was a sudden bout of the flu rather than food poisoning – Pal caught it within days!).

And what suck-y timing: not a great state to be in the night I had a Lobotomy Room scheduled! Cancelling wasn't an option – it would definitively burn a bridge with the venue if I cancelled with such short notice. I would never be able to approach Hysteria again! So – dashing to the bathroom to vomit every few minutes right up until I had to leave the house to head for Dalston - I sucked it up and carried on like normal. It was a long night and I was shivering and sweating profusely behind the DJ booth the whole time – but I stuck it out!

About the venue Hysteria: everyone seemed to love the ultra-minimalist soot-black basement. On the night it turned out the DJ booked for the bigger ground-level bar cancelled so I had the option of re-locating Lobotomy Room upstairs – but I infinitely preferred the dark and squalid S&M dungeon with exposed bricks illuminated by just a few red light bulbs – perfect for my purposes!

Hysteria was also my first ever venue with a proper late licence: on weekends it’s open until 3 am. That was definitely a learning curve. Between 10:30 pm until 12:30 the crowd was worryingly sparse and I was reconciling myself to a poorly attended night. But then at about 12:45 the place exploded with people and stayed frantically busy right up until chucking-out time. It was a big consolation to glance up and see throngs of people dancing! So the tenth-ever Lobotomy Room (and the first of 2015) was a painful night in some ways (by 3 am I was so drained I was virtually hallucinating), but ultimately successful.

/ Pal and Charlie (note Pal's beautiful La Rocka! t-shirt. I got him that for Christmas) /

/ Italian Barbara and I (I'm chewing a wasp, like usual - every damn photo every taken!) 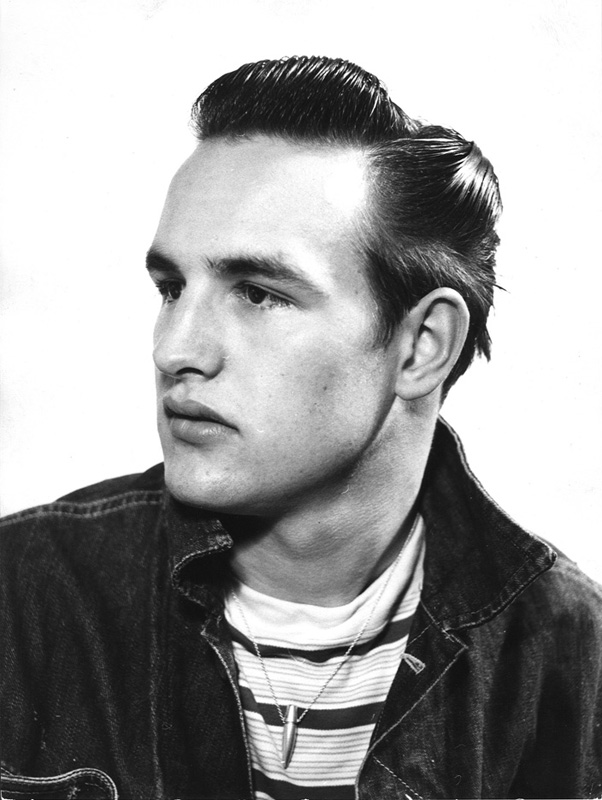 I won’t lie! This post will be a bit of a rush job – long on pretty pictures, short on text. At the moment I am one distracted mofo. Tonight (Saturday 21 March) is the latest installment of my own semi-regular trashy club night Lobotomy Room (the first one of 2015) in Dalston and I am vibrating with nerves. To paraphrase Homer Simpson, my stomach is full of vomiting butterflies! 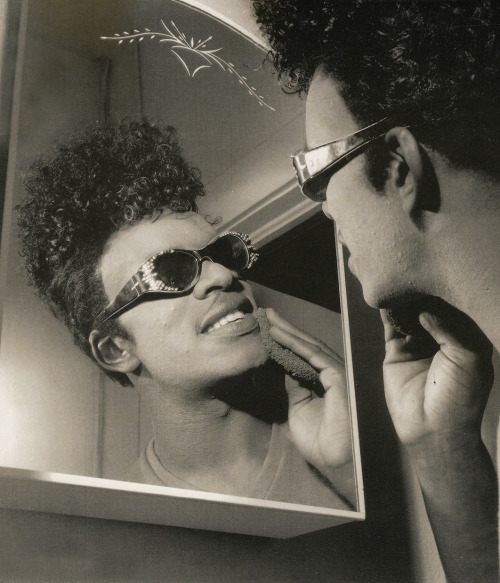 / The ever-fierce Esquerita (1936-1985) is the sassy and defiant face of Cockabilly! Like his friend and contemporary Little Richard, the outrageous Esquerita qualified as both the King and Queen of rhythm and blues. Click on a pair of diamanté shades and freak out the squares in his honour! / 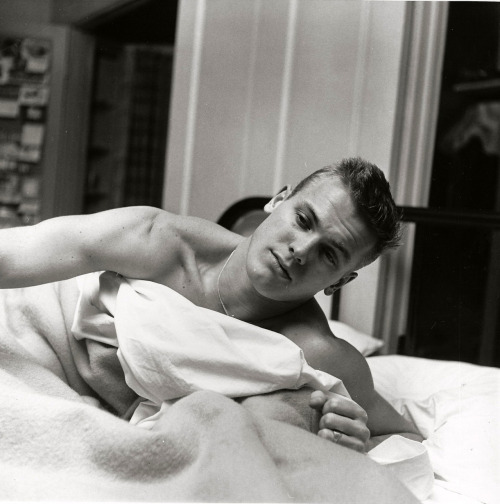 First off: some red-hot gossip. Courtesy of literary roué Rupert Smith I was privileged to be snuck into this afternoon’s sold-out screening of The Golden Age of The American Male at The British Film Institute’s Flare Festival as his “plus one”. Screening afterward was Tab Hunter Confidential – a revealing new documentary in which the dreamy heartthrob actor confides what it was like being a closeted gay celebrity in atomic-era Hollywood. Rupert and I were in the VIP “green room” afterwards drinking when the team behind Tab Hunter Confidential arrived – including Tab himself, his long-term boyfriend and entourage. He sat directly opposite me and as I confided to Rupert, my heart was pounding and I couldn't stop staring! A quick Google search confirmed Hunter is 83 now – and still stunningly, remarkably jaw-droppingly handsome! Silver hair, powerful shoulders, and a jaw line chiseled out of granite. (I could hear him speaking to people and his manners are old-school impeccable). Rupert and I were swooning!

The Golden Age of the American Male was a compilation of the Athletic Model Guild’s short homoerotic beefcake / physique films from the Fifties and Sixties. Think greaser punk hoodlums in posing pouches and engineer boots wrestling and spanking each other – delicious! About 75% of all the vintage gay porn I post on here and on tumblr inevitably originates from AMG - that studio represents the acme. It was a symphony of juvenile delinquent rough trade, all gap-toothed smiles (some of the younger models straight out of their teens still had acne), oiled quiffs and sprinkled with crude reform-school tattoos cavorting to a soundtrack of obscure rockabilly and surf music. (The most famous – and instantly recognisable – face among them was teenage pre-Warhol Joe Dallesandro). In other words – my definition of heaven!  There were nice segments with guys dressed as black leather-jacketed The Wild One-style bikers, sailors and Roman centurions. But for me the most joyous sequence was intercut bits of AMG boys frantically go-go dancing stark naked (think jiggling “helicopters”) – life-affirming! The main man behind AMG was photographer, filmmaker and connoisseur of firm male flesh Bob Mizer (1922-1992). Today The Bob Mizer Foundation is working on preserving, digitising and gradually making these films commercially available as DVDs. I dream of projecting this stuff against the wall when I DJ at Cockabilly or Lobotomy Room!

On 1 April 2015 I jet out for this year’s Viva Las Vegas Rockabilly Weekender (2-5 April) – followed by a few days of recuperation in the torrid voodoo realm of New Orleans. I've never been there before and I’m really intrigued.  I intend to luxuriate in and absorb New Orleans’ sleazy Southern Gothic underbelly by hopping between atmospheric dive bars and channeling Tennessee Williams and John Rechy’s City of Night. In my research I've already learned that Tennessee Williams’ regular watering hole was Cafe Lafitte in Exile. My guide and host will be New Orleans-based journalist Kevin Allman, who’s tipped me off that John Waters’ favourite local bars when he’s in town are the Double Play (described as “a really seedy trans/hustler bar”) and the Corner Pocket (similar to The Fudge Palace in Waters’ 1998 film Pecker. Tea-bagging ahoy!). What better recommendation?

Anyway:  this month Cockabilly (London’s only regular monthly queer rockabilly night! Rock around the cock!) fell on a Tuesday. Let’s face it: Tuesday night just isn't anyone’s idea of rock’n’roll no matter how you cut it. Nonetheless, Cockabilly boss man Mal and I did our damnedest to stir-up a raunchy and desperate ambience. Here is what I played. 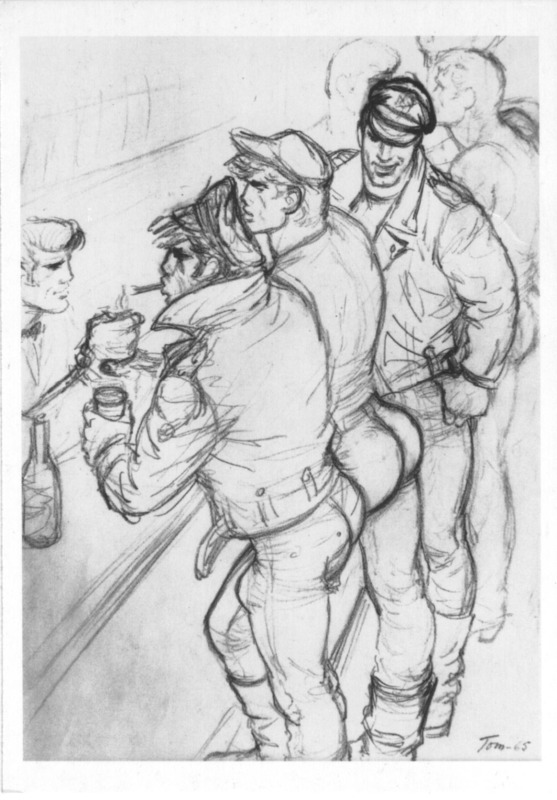 / Ideally, the scene at the bar Tuesday night would have looked more like this /

Last blog post I expressed my anxiety about Google’s proposal to clamp down on “adult content” and what it meant for the future of my blog. Happy days! After a tsunami of bad publicity and much rage amongst bloggers, Google has climbed down and are now maintaining their existing policies. Phew! My message of filth continues!