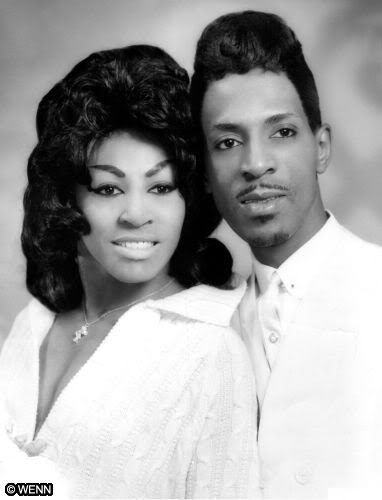 This night (at the Royal Vauxhall Tavern) represents one of my angrier and tenser sets that definitely required more alcohol than usual to endure (tense, angry tittyshakers – maybe that’s my new forte?). It all relates to still-raw agonising, mortifying romantic disappointment, but this isn’t that kind of blog so don’t worry, I’ll stop there.

I guess the set list is a bit of a glimpse into a DJ’s inner torment, though: especially the first few songs of desperate rhythm and blues awash in heartache (Little Richard, Lula Reed drowning in her own tears). The two Ike and Tina Turner songs are particular favourites. The lyrics to “You Got What You Wanted” really nails my mindset at the moment. The song (surely Ike and Tina’s finest moment?) has slayed me since I first heard it as a teenager on crackling vinyl: two minutes and 26 seconds of simmering, contained tension that keeps escalating. Tina initially delivers the words of heartbroken lament in a pained snarl, as if through clenched teeth (with the Ikettes cooing their support) until finally lashing out in a full desperate wail. Forget everything you think you know about her admittedly awful post-1980s comeback stadium rock: in the 1960s, Tina truly was the tigress of R&B!

/ Below: cruelly brief fragment of Tina on blistering form, singing "You Got What You Wanted" in 1968. I'd kill to see the entire performance /

The great irony of the Turners' music is that Ike himself wrote for Tina these incredible despairing lyrics to sing - and yet he was the cause of her despair, the reason she can sing them with such turbulent, wrenching conviction. One of the best analyses I’ve ever read of the tortured psychology that makes Ike and Tina’s best music so riveting is in Jimmy McDonough’s biography of sexploitation auteur Russ Meyer (Big Bosoms and Square Jaws, 2005). He shrewdly notes that ...

“... the sexual tension in Meyer’s movies is not dissimilar to that within such classic Ike and Tina Turner records as “You Got What You Wanted” or “I’m Gonna Find Me a Substitute.” Ike Turner – another infamous control freak who worried every detail down to the fringe on the Ikettes costumes – crafted tense, tough, tightly constructed songs for Tina, with melodramatic and often masochistic lyrics that portray a mythical dream woman willing to subjugate herself to Her Man at any expense. At times she struggles to stay on top of the number, singing like there’s a gun at her head. The song is a cage, built for Tina to bust loose from. Her desperate, impassioned, angry vocals often seem at odds with words, adding a layer of divine complexity to one very bizarre and moving puzzle.” 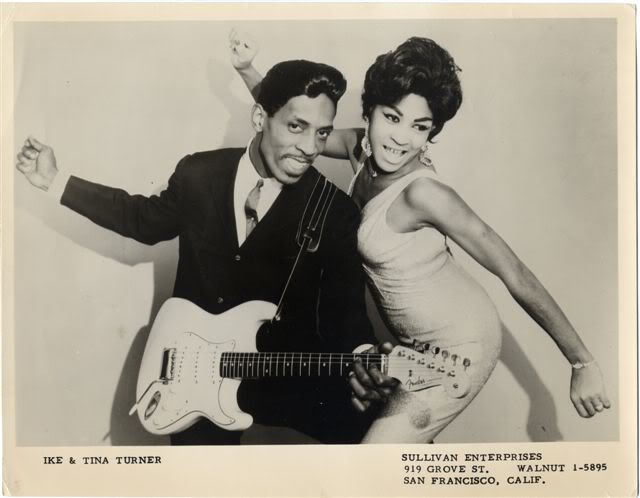 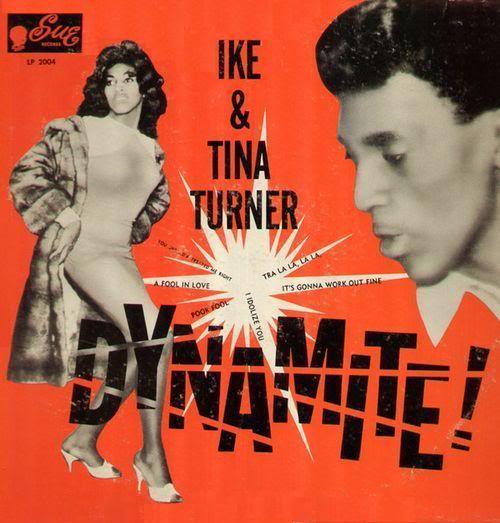 Otherwise: the great Tricity Vogue made her very assured debut as a Dr Sketchy emcee and she’s always a blast. She accompanied herself on ukulele on a rendition of “Put the Blame on Mame” (the sultry Rita Hayworth striptease song from the film Gilda) – definitely the evening’s highlight. And Bettie Bottom Dollar (who’s becoming a bit of a Dr Sketchy stalwart) made for a scintillating performer and model.

And finally ... perhaps the mother of all tittyshakers. This song ("Crawlin'" by The Untouchables) had become an obsession and it was proving impossible to find until Jorge (aka DJ Zorch) from Los Angeles came to the rescue. I'll be buying him plenty of cerveza when I see him at Viva Las Vegas in April! 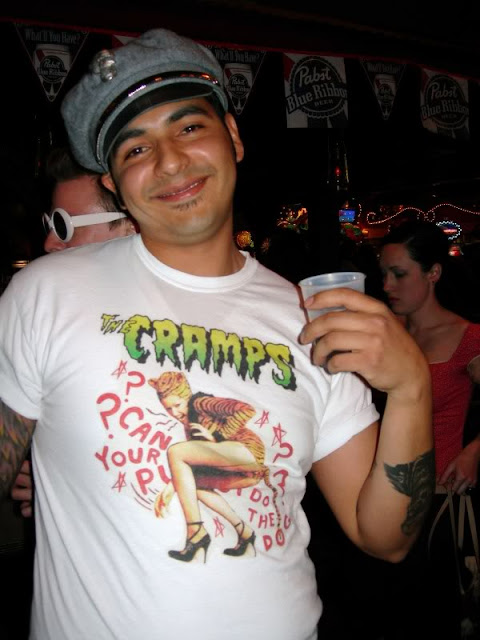 / Jiggle jiggle: the dancer is the great Cherry Knight  / 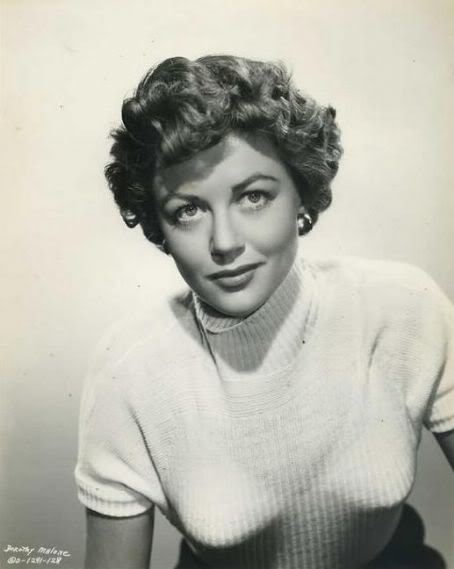 Dorothy Malone demonstrating the Fifties bullet bra’d sweater girl look. Malone is one of the great unsung actresses from the fifties and should be immortal if only for her courageously lurid performance as the alcoholic nymphomaniac sexpot sister in Douglas Sirk’s irresistable 1956 melodrama Written on the Wind. Check out the scene where she unwittingly causes her own father’s death by dancing to frantic mambo music in lingerie in her bedroom. Death by Mambo! It's one of the greatest scenes in any film ever made! They don’t make ‘em like that anymore! (And when I say that, I mean films and actresses).

I don’t know if it’s because they’re held in the daytime (and therefore I wind up drinking beer in the daytime), or because it's on the weekend and I don't have to worry about being tired or hungover the next day, but the Saturday afternoon Dr Sketchy’s at The Old Queen’s Head tend to feel more mellow and laid-back. And the music I tend to play is probably more raucous and rockabilly-ish (punkier? Messier? Certainly louder) as a result.

For this Dr Sketchy the emcee was the vivacious hourglass-contoured Ophelia Bitz (always a blast to work with) and the sole model and performer was platinum blonde showgirl deluxe Slinky Sparkles (who I got to know years ago when I used to work with her at the What Katie Did boutique in Portobello). A burlesque starlet on the rise, Slinky recently got a great break: she’s made it into the finalists and will be participating in the burlesque competition at the annual Viva Las Vegas rockabilly weekender this April. We’re all really proud of her! I’ll be there (trust me, the knowledge am going to Las Vegas in April is one of the few things gluing me together at the moment) so can report back how she does in the competition – am sure the Americans will go berserk for her. Needless to say, when Slinky was posing I went full tilt boogie on sultry sex kitten tunes by the likes of Bardot, Eartha, Julie London, Jayne and Marilyn.

I realise I haven't posted any samples of the dark art of the titty shaker recently. Let's remedy this right away with this ultra sleazy gem by Andre Williams. 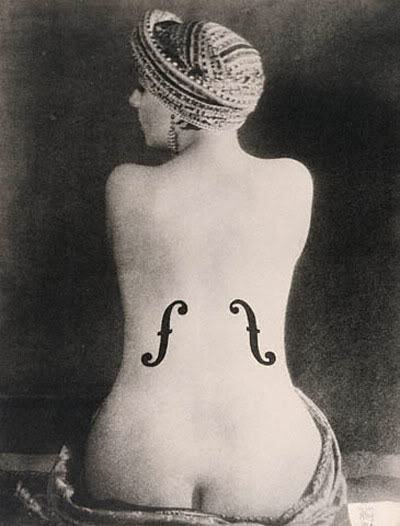 Not one of my better nights! This Dr Sketchy was actually based around the launch of the graphic novel / biography Kiki de Montparnasse, about the bohemian 1920s Parisian nightclub chanteuse, scene maker, Man Ray muse and model (and artist in her own right). I only caught a glimpse of the book, but it looked beautiful. I wasn’t briefed that well about this in advance: it turns out the musical policy for the night was meant to be “1920s” – which is one era am definitely not that knowledgeable about or particularly motivated by (Charleston music? Flapper music? I don’t really feel it!). So I turned up to The Paradise with a grand total of zero 1920s tunes to play! / The Queen of Montparnasse, photographed by Man Ray /

/ Below: trippy/surreal video of Kiki in action /

Luckily our featured burlesque performer (the reliably excellent Marianne Cheesecake) had her laptop with her and it was loaded up with twenties music (she uses it in her act a lot. It was mostly songs by Fletcher Henderson) so we hooked it up to the decks and for the first hour or so I played her selection from iTunes. But standing there with my arms folded didn’t really feel like DJ’ing so at a certain point I snapped and wound up playing my usual brand of sleaze from the entirely wrong era! (This also explains why the set list looks so much shorter than usual!). I was kicking myself afterwards because while I don’t have much in the way of 1920s music, what I do have a lot of is French chanson music from roughly the right period if only I’d known to bring it. In particular the first time I went to Paris I snapped up a compilation of French cabaret / music hall songs from the 1930s featuring the likes of Piaf, Josephine Baker, Jean Gabin, Arletty, Frehel, Charles Trenet, Maurice Chevalier, Mistinguett, etc – that would have worked beautifully in this context!

I also drank a bit more than usual (or actually not, but maybe I didn’t eat enough beforehand) and things got a bit sloppy: I played some songs in error (!) and even played one track more than once! Like I said, not one of my better nights. Still, it’s impossible not to have fun when working with Ophelia Bitz (the emcee for this Dr Sketchy), Marianne Cheesecake was amazing (especially her gold Josephine Baker-inspired outfit with the banana skirt) and I managed to pay a little tribute to the late, great Jane Russell: when Bomb Voyage and Cheesecake modelled together, I played the Russell-Monroe duet from Gentlemen Prefer Blondes, “Two Little Girls from Little Rock.” 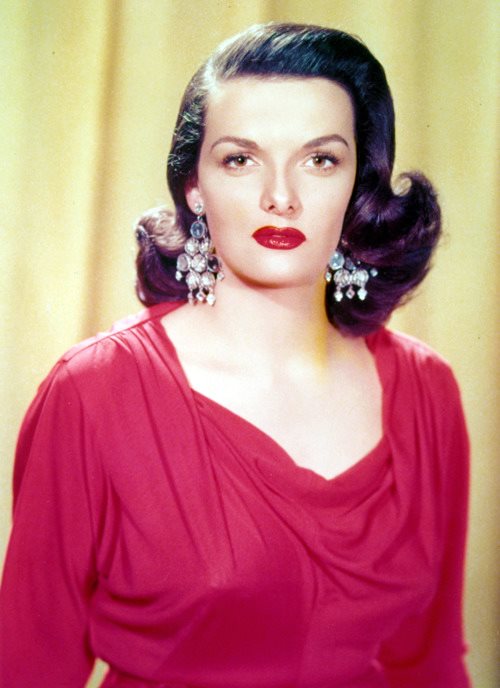 Jane Russell (1921 - 2011): What a woman! Truly amazonian, the definition of "statuesque." (Photo courtesy of the wonderful blog Stirred, Straight Up, with a Twist). This pic is definitely from the film The Revolt of Mamie Stover (1956), in which Russell was a redhead 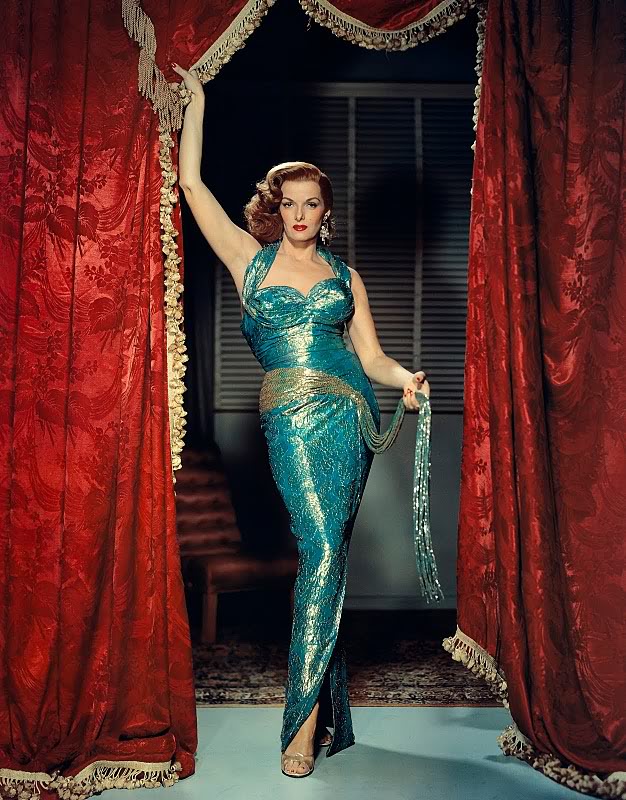 Russell's obituaries inevitably cited The Outlaw (1943) and Gentlemen Prefer Blondes (1955), but for me La Russell's best films were the two atmospheric noirs that partnered her with my all-time favourite actor Robert Mitchum: His Kind of Woman (1951) and the even better Josef von Sternberg-directed Macao (1952). Mitchum and Russell smouldered together: so laconic, lazy and good-natured. You never caught either of them acting -- they were like two sleek, beautiful animals that just sauntered up in front of the camera exuding effortless charisma and sex appeal. Russell was also an underrated singer. This is her singing the torch standard "One for My Baby (and One More for the Road)" in Macao -- a nice way to remember her.

/ Below: Robert Mitchum and Jane Russell / 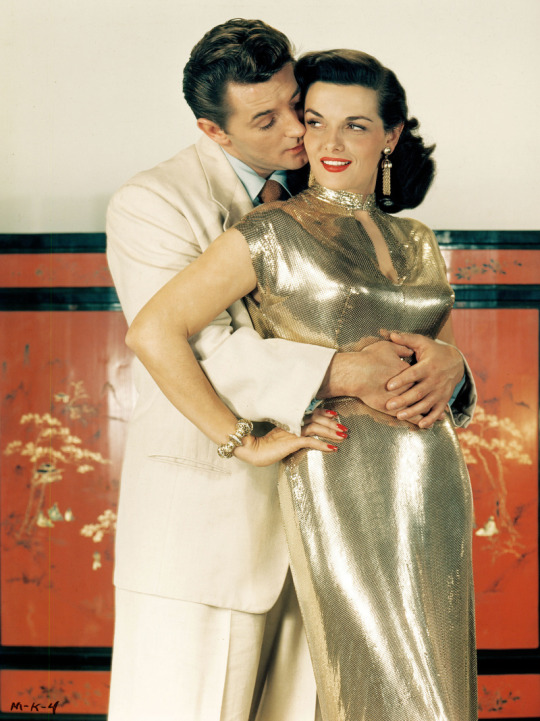 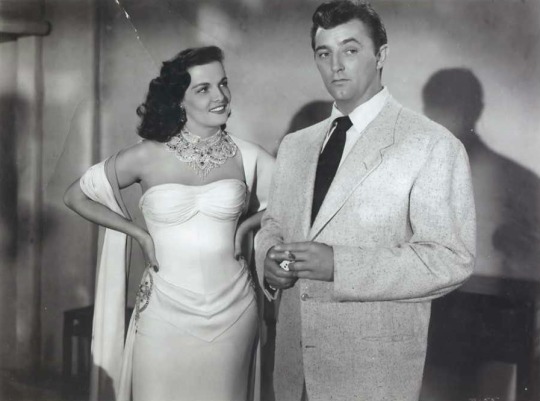