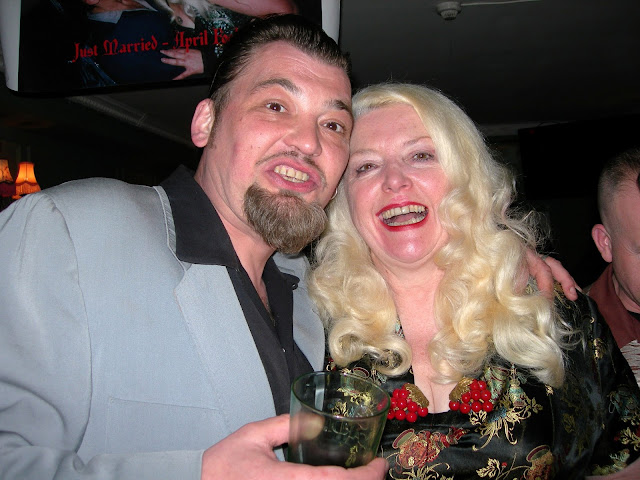 / Gail and Jasja (aka Sparkle Moore and Cad van Swankster, the proprietors of London's most chi chi vintage clothing emporium The Girl Can't Help It) were given a raucous and boozy send-off at their farewell party at Ryan’s in Stoke Newington on 15 April 2011 / 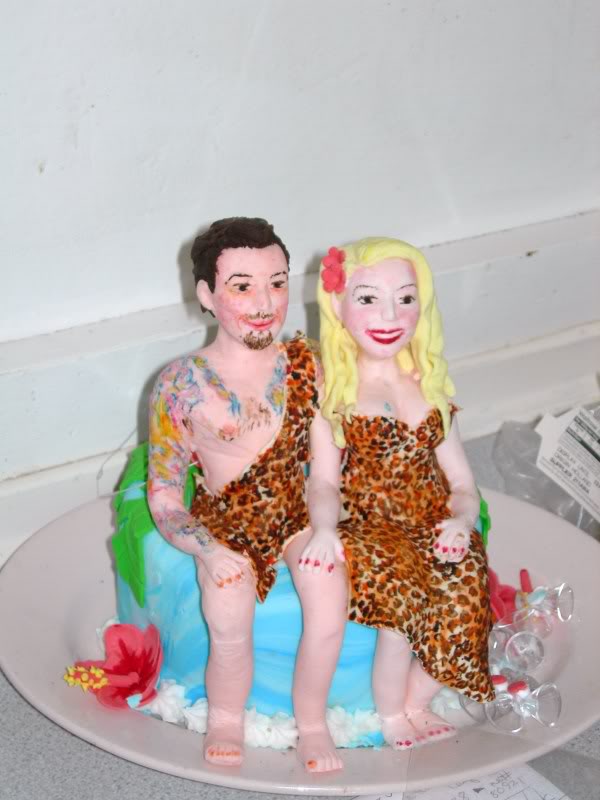 / (Gail and Jasja were married on 1 April 2011. The sugar couple from the top of their wedding cake looks eerily like them -- down to the fine details of Jasja's tattoos!) /

In the 1990s Gail was the hostess / promoter of sleazily atmospheric club nights like More than Vegas and Blue Martini – clubs that plunged Soho back to its seedy neon-lit 1950s golden age. I discovered More than Vegas early on when I first arrived in London and it was instrumental in making me the twisted fuck I am today!

I didn’t take as many photos as I should have at the party (how could I not have photographed Ms Mansfield?!). I was DJ’ing for the first half of the night, which was a bit chaotic (technical problems a-go go!) and afterwards drank a helluva lot to de-stress. (Did I mention it was a boozy night?). Gail and Jasja have re-located to San Diego and will be much-missed by their friends in London. (Jasja would definitely want me to point out The Girl Can't Help It is staying put at Alfie's Antique Market and is in the safe hands of Laurie Vanian).

It was an honour to be asked by Gail to be one of the DJ's at their leaving-do. Going to More than Vegas in the early 90s was definitely a factor in making me want to pursue DJ'ing, and the More than Vegas resident DJs like Jake Vegas and (especially) the sublime Ms Mansfield were certainly an inspiration. 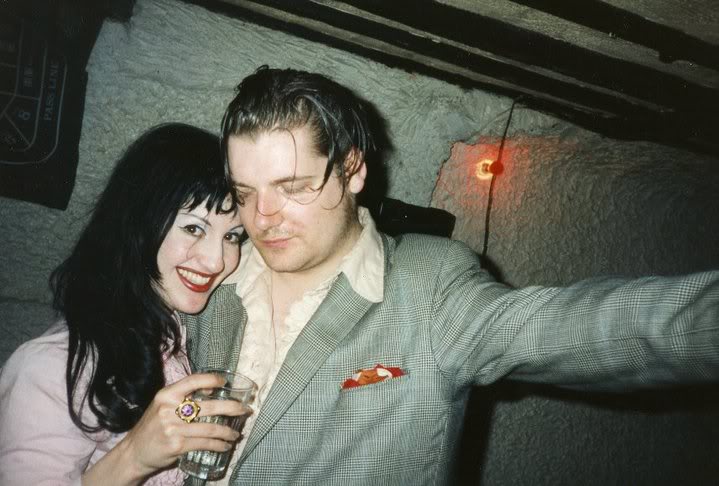 / The Way They Were: Ms Mansfield and Jake Vegas in the old days at More than Vegas at The St Moritz on Wardour Street / 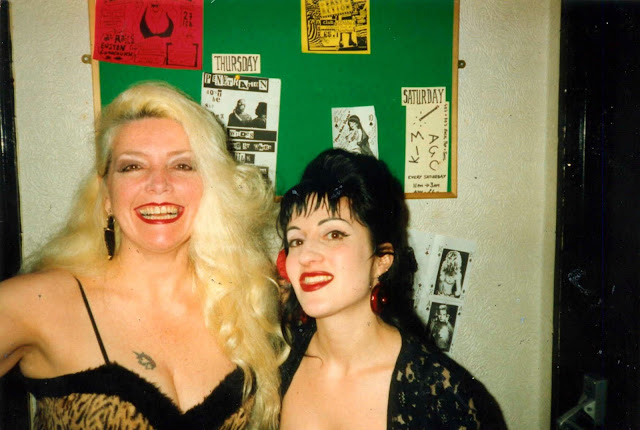 / Gail and Mari in the nineties /

Gail's only musical stipulation was she wanted lots of Eartha Kitt, Jayne Mansfield and Violetta Villas so I definitely played more than one track by each (well, except for Violetta as I only have one song by her!). Playing at least one song by the original Sparkle Moore, the great female rockabilly chanteuse Gail swiped her name from, was also compulsory. 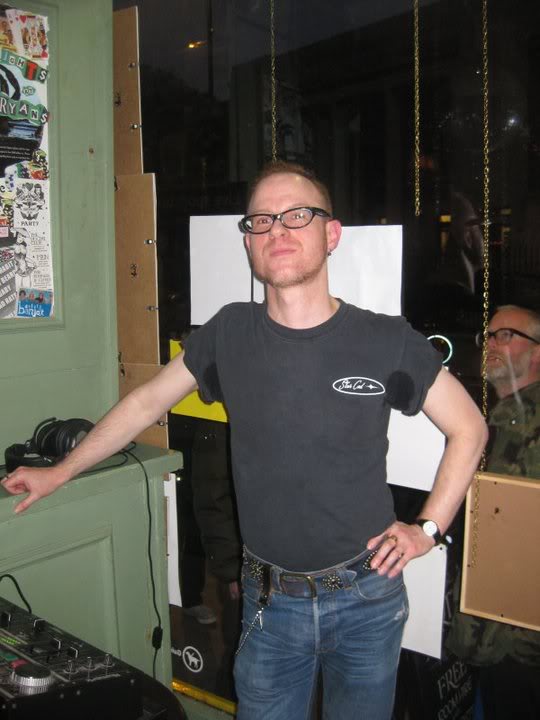 / Me DJ'ing at Gail and Jasja's leaving party. Can I just say in my own defence, it was very hot in that corner and I'd been running up and down the stairs earlier ... /

I was the first DJ on and the whole audio situation was very much cobbled together at the last minute and very stressful (and I was pounding back beer to combat the stress), so my set wasn't as smooth and flowing as I would have liked. But anyway, here it is ...

(Looking at this set list in retrospect, am sure I've left some songs off ... I definitely played Eartha Kitt's version of "Mack the Knife" in there somewhere. I DJ'd for at least 90-minutes, so there must have been more songs than that! Ah, well. They're lost in the mists of time now).
Posted by bitter69uk at 09:11 No comments: 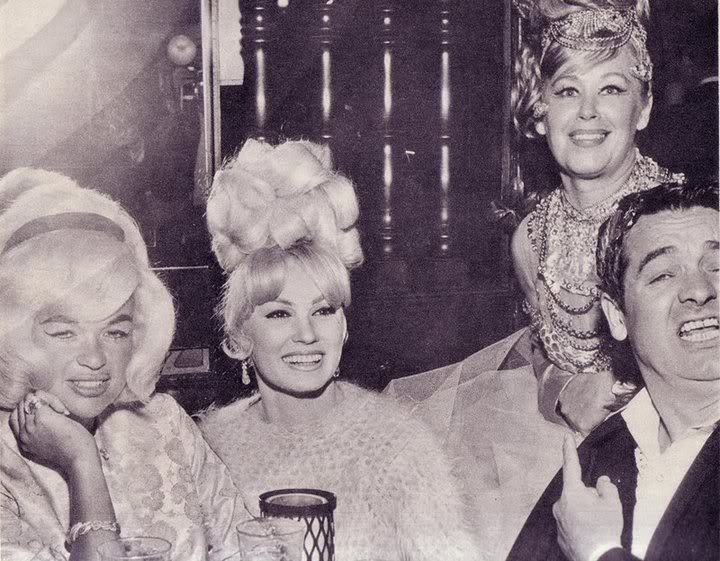 This might be a bit of a rush job: I fly to Vegas for the annual Easter rockabilly weekender Viva Las Vegas early morning on 20 April and want to blog this set list while it's still fresh in my mind.

I’m the first to admit this night wasn’t one of my better ones: lots of technical glitches to feel anxious about (i.e. with the microphone, the decks themselves, and will I ever work out how the stage lights at The Royal Vauxhall Tavern work?!). Plus the RVT is synonymous with still-agonising romantic disappointment for me (don’t worry, I’ll spare you the details) and as a result I drink one helluva lot more there while DJ’ing, which probably impacts on things. Hopefully the music didn’t come across as too disjointed and erratic.

Musically what I’m really feeling at the moment is moody, atmospheric 1950s heartbreak ballads, the kind with lots of echo on the singer’s voice and ghostly rockabilly guitar: think Eddie Cochran’s "Half Loved", “The Strangeness in Me” by The Runabouts and the eerie “Flower of My Heart” by Sparkle Moore. (I’m kicking myself for not packing “The Fire of Love” by Jody Reynolds – something I’ll rectify next time). "Mess of Blues" is one of my favourite Elvis ballads. “Nobody Knows” by The Earls of Suave packs a boozy sense of regret I can certainly relate to these days.

I wrote recently about my love for the turbulent Turners, but I didn’t realise Ike and Tina ever did a version of “Love Letters” until recently. The song is something of a pop standard, covered by everyone from Elvis, Peggy Lee, Julie London and of course Kitty Lester, whose hushed, gospel-inflected version was used so hauntingly by David Lynch in Blue Velvet. Ike and Tina's rendition couldn't sound less like a typical Ike and Tina number: it opens with a swirl of sugary strings and the Ikettes sound almost angelic, contrasting nicely with the sandpaper rasp of Tina's voice. Her delivery initially starts quite measured but within no time she’s in full roar, tearing the song apart with her bare hands – you’ll never hear a more urgent version of “Love Letters!” 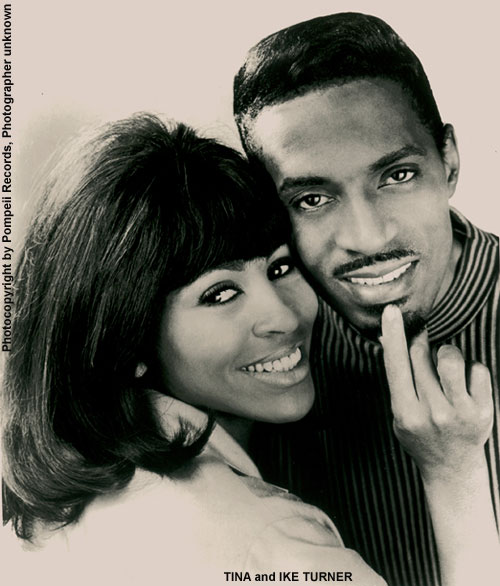 The inimitable Ophelia Bitz was the emcee again this time. This night featured a burlesque performer (Lady Cave, who’s Australian and sports a black patent leather Louise Brooks bob) and the model Tiffany Chin-Sim. For her pose Tiffany wore a spangled belly dancer costume, so needless to say I played Eartha Kitt’s “Uska Dara” and exotica like “Camel Walk” by The Saxons and “Lust” by Les Baxter, featuring the Yma Sumac-like wails, growls and screams of Bas Sheva. 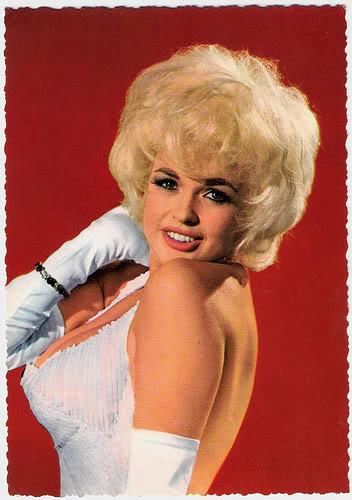 For this Dr Sketchy (at The Old Queen's Head in Angel), the emcee was Ophelia Bitz and the performer / model was Cherry Shakewell: I defy anyone not to have fun with cabaret and burlesque royalty like these two. Plus it was the first Dr Sketchy for me to unveil my week-old new tattoos (they’d finally healed, stopped flaking and were presentable at last).

I eased into proceedings with some Latin exotica (mambo, the 1965 Eartha Kitt Canta en Espanol album) before journeying into deep vintage sleaze. Cherry Shakewell’s image (bouffant blonde hair, thick false eyelashes, white lipstick) evokes Russ Meyer-esque 60s go-go dancers so while she posed I went heavy on 1960s sex kitten / babydoll-type tracks by the likes of Bardot, Nancy Sinatra and Ann-Margret. Obviously Jayne Mansfield (the punk Marilyn Monroe, who died for our sins) is an eternal touchstone: her track “Suey” always sounds to me like the tortured inner monologue of a go-go dancer gyrating from the confines of her glittery go-go cage – the perfect soundtrack for Cherry’s pose. I also decided long ago that "Cherry" by The Jive Bombers should be Ms Shakewell's theme song. 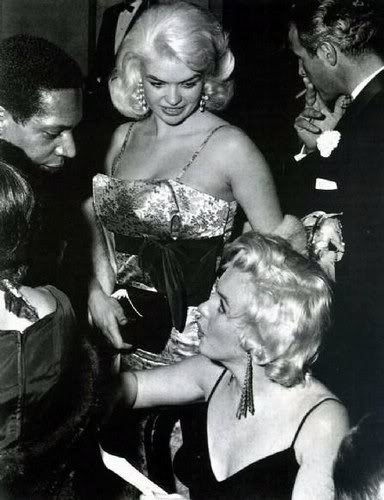 Another tune I play a lot lately is "You Can't Stop Her" (1959) by Bobby Marchan (1930 -1999), the African-American New Orleans-based rhythm & blues singer best known for fronting Huey Piano Smith & the Clowns. Driven by raucous sax, the song has a vibe similar (both musically and lyrically) to Little Richard’s “The Girl Can’t Help It.” In fact Marchan and androgynous Queen of Rock’n’Roll Little Richard could be seen as soul sisters or fellow travellers: when he was scoring hit records with The Clowns Marchan dressed in male clothing, but prior to that he’d gained local notoriety as a blonde-wigged female impersonator and emcee billed as Loberta in evocatively-named dive night clubs like the Dew Drop Inn and Club Tijuana. In his consistently amazing blog The Houndblog, James “The Hound” Marshall writes about Marchan’s fascinating life and career, uncovering the subterranean drag queen influence in blues and rhythm & blues (and therefore rock’n’roll itself), the kind of angle usually airbrushed (bleached? Deracinated?) out of the hidebound “straight” (in every sense) rock history limited to Elvis, The Beatles and those endless “100 Greatest” lists. (For a nicely-researched thoughtful piece about the queer sensibility that throbbed in the background of blues and R&B, read this). 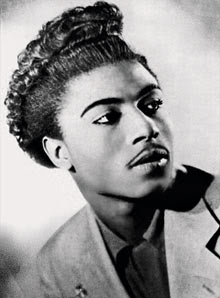 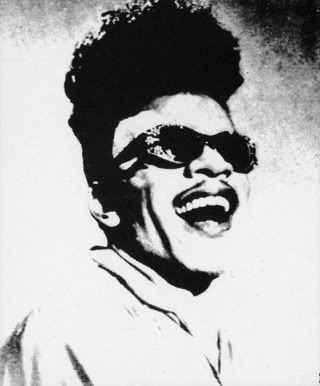 Marshall mentions that both the outrageously seedy Esquerita and Little Richard also started out as at least quasi drag queens at the beginning of their careers, too. Little Richard’s drag stage name was “Princess Lavonne”, and some of his best known songs are supposedly coded tributes to his old drag queen friends: “Good Golly Miss Molly”, “Long Tall Sally.” (“Tutti Fruiti”, of course, is legendarily a paean to anal sex). In the repressed pre-civil rights 1950s middle class white parents were anxious enough about their kids listening to (and being corrupted by) the likes of Little Richard, Bobby Marchan and Esquerita: just imagine if they’d really known the full story! Freaking out the squares – it’s a wonderful tradition. As Marshall concludes in his Bobby Marchan profile...

“Of the many untold secrets that still hide up the rumpled skirt of R&B and rock’n’roll history, one surprise you will find is a black cock, and I’m not talking about roosters.”

Until next time -- take it sleazy! 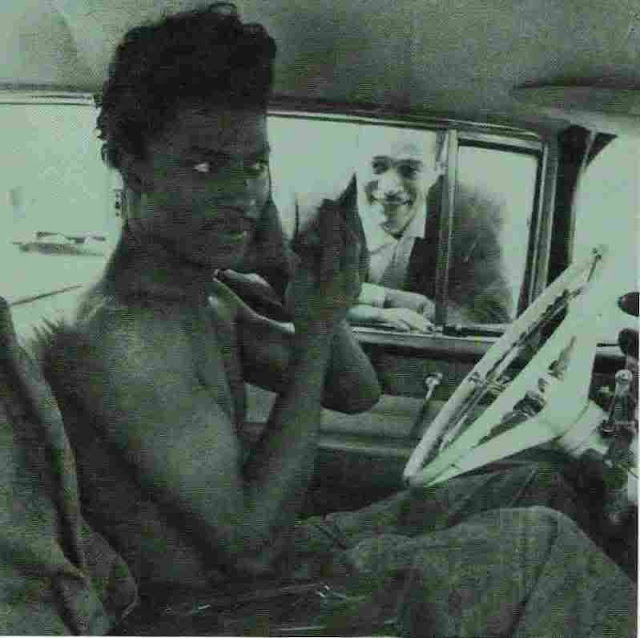 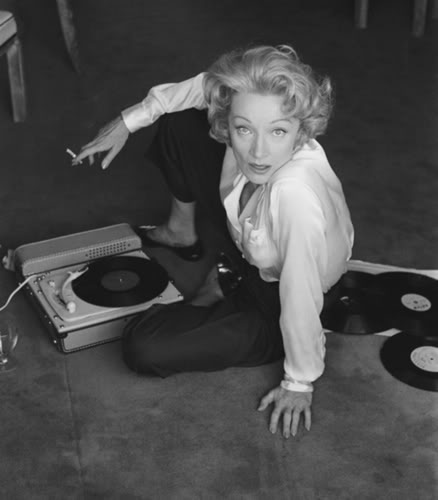 A fun and enjoyable night at The Paradise in Kensal Green. Wait, it’s uncharacteristic of me not to complain about something -- well, the venue was freezing cold, so it was an evening of goose bumps and erect nipples (I speak only for myself here). There.

Our featured burlesque performer and model were both rising burlesque starlets making their Dr Sketchy debuts: performer Ava Iscariot made a real impression with her raven-haired Bettie Page wig and glittery black tarantula-shaped pasties. The gorgeous model Pia was actually a former audience member whose beauty and poise so impressed Dr Sketchy promoter Clare Marie she persuaded her to model for us (this is like a great show biz “discovery” story in the tradition of a nubile young Lana Turner being discovered drinking a milkshake at Schwab's drugstore by a Hollywood agent). Both undoubtedly have great futures ahead of them.

Emcee “Queen of Cabaret” Ophelia Bitz was on typically raucous form: a vision in leopard skin gold sequins, she warned the front row of the audience she wasn’t wearing any underwear and cautioned they might get a glimpse of “flange”. (The spirit of Tallulah Bankhead lives on). One of the definite perks of DJ’ing at Dr Sketchy is having Ophelia sing along to (and sometimes go-go dance along to) the CDs I’m playing in the DJ booth. It’s like being serenaded!

Mind-blowing clip from 1960 Italian horror / sexploitation flick The Vampire and The Ballerina. I think calling them "ballerinas" is a bit misleading ...