The World of the Heterosexual ... 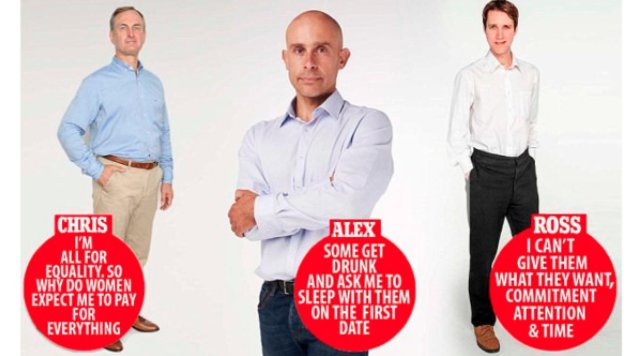 The Problem with Women Today, According to Daily Mail Readers. Aunt Ida in Female Trouble was right! The world of the heterosexual is a sick and boring life. 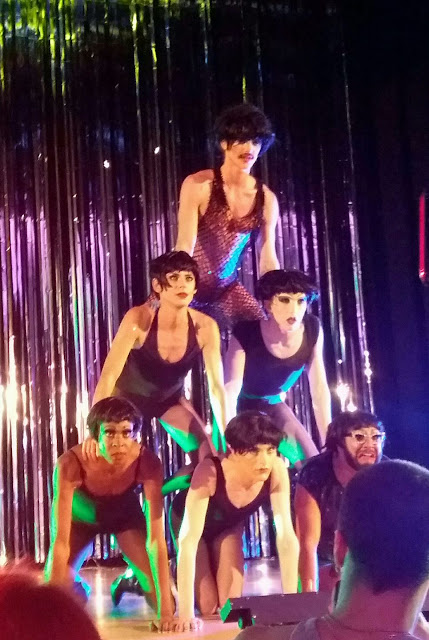 THE GLORY GALA Featuring Liza with a Z

Following on from the amazing success of LIPSYNC1000, Jonny Woo will stage a re-enactment of the award-winning 1972 TV special Liza with a Z. Featuring 25 of the LIPSYNC1000 stars and some extra special guests, hosted by The Glory’s own John Sizzle, Liza Minnelli is getting a 21st Century makeover!

Alongside the ‘Liza’ centrepiece, The Glory Gala brings our favourite DJs and a selection of the new Drag King Stars from this year’s season of MAN UP! who will be showcased in the 'Glory Gentlemen’s Club"

The Glory Gala heralds our first celebration of Pride in London with a showcase of everything you love about The Glory. Spectacular, riotous, joyous cross-dressed party carnage. And with over 25 Liza Minnellis on show, what isn’t there to love? 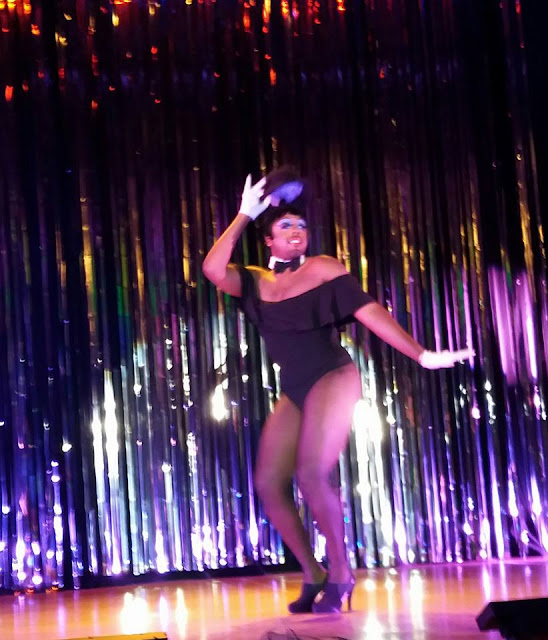 / Freida Slaves: one of the many facsimiles of Liza Minnelli! /

The Glory’s Pride 2017 Gala at Stoke Newington Town Hall on 7 July was a  truly glorious freaking tour de force! Or as my boyfriend Pal put it: amazing with a Z!

The evening incorporated a painstaking and imaginative recreation of Liza Minnelli’s 1972 TV special Liza with a Z musical number-by-musical number live onstage. Think of it as a night of 1001 Lizas: the huge cast (including Jonny Woo, Jayde Adams and La JohnJoseph) incorporated a disparate crew of multiple Minnellis of all genders and ethnicities, many of whom sporting luxuriant facial hair. (All of the surrounding wig emporiums from Dalston to Peckham must have sold out of short, perky Liza Minnelli-style pixie Dynel wigs).

While I treasure Minnelli as a kitsch figure of fun (she personifies pill-popping Valley of the Dolls-style smiling-through-your-tears glitzy old-school show biz corniness), I also mainly know her for her dysfunctional hot mess years: terrible films like Rent-a-Cop (1988) and Stepping Out (1991), her highly publicised stints in rehab, her mortifying short-lived marriage to the repellent David Gest and that befuddled, heavily-medicated episode where she hawked her own line of clothes on the Home Shopping Network. This night was a good reminder that in her seventies prime (around the time of Cabaret (1972) and when she was rubbing shoulders with the Warhol crowd at Studio 54 clad in head-to-toe Halston), Minnelli was a vivid, original and credible performer. (It’s got to be said, though: Pal and I watched Minnelli’s 1972 TV special in bed on the iPad the night after. In some cases, The Glory’s performers improved on the original!). 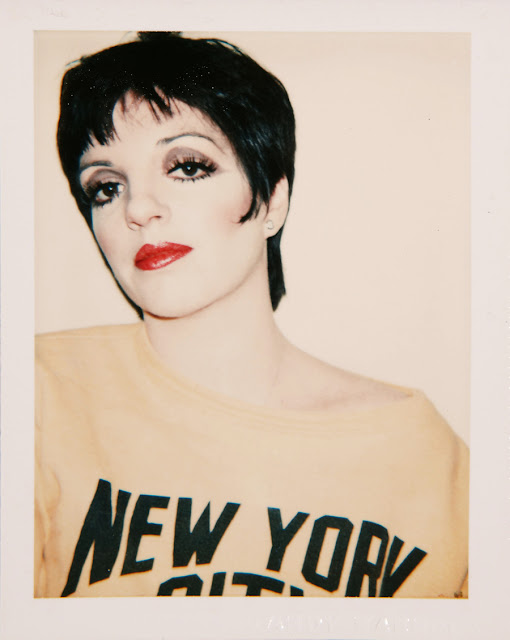 / Above: Liza Minnelli Polaroid by Andy Warhol. Let's remember her this way / 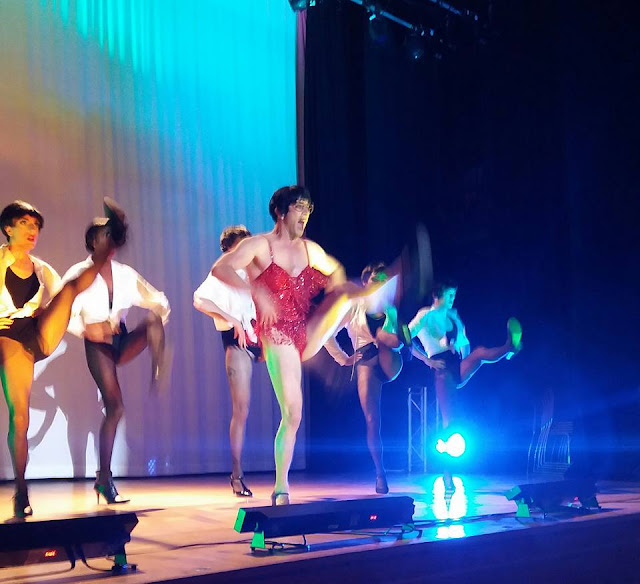 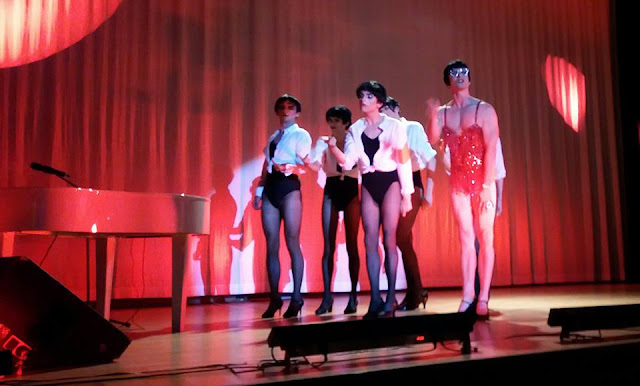 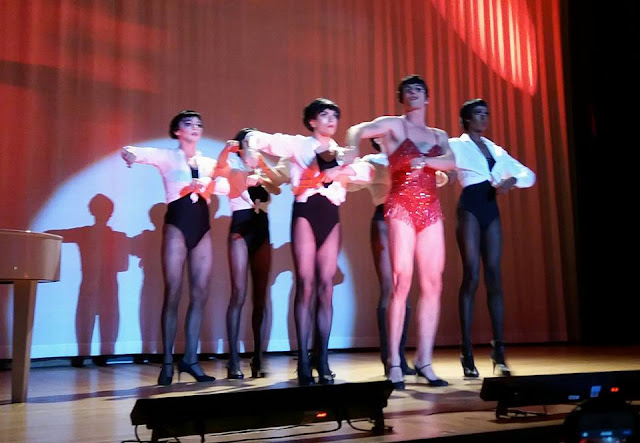 / Above: Jonny Woo and co recreating the "Ring Them Bells" musical number /

And – judging by the enthusiastic and diverse crowd’s hunger for jazz hands, sequins and tremulous emoting - Minnelli’s enduring status as a cherished gay icon is clearly unassailable. Anyway, everyone was great. Or “terrific” as Minnelli herself would say. Pal (who has a dance background) is ultra-critical of other dancers and even he said he was dazzled by how they’d nailed the slinkily sinuous Bob Fosse choreography. 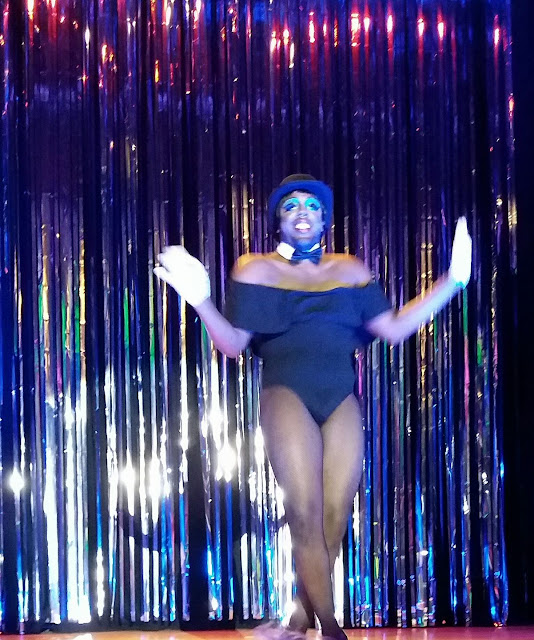 Much as I loved Freida Slave’s interpretation of “Bye Bye Blackbird” (above) my highlight was the finale (which most definitely had nothing to do with the original Liza with a Z!): an anguished John Sizzle in a ratty fright wig, hospital gown and wheelchair seemingly in throes of a nervous breakdown and en route to rehab, tormented by dancers in David Gest wigs to a soundtrack of Liza belting out the 1989 Pet Shop Boys-produced synth-pop version of “Losing My Mind.” 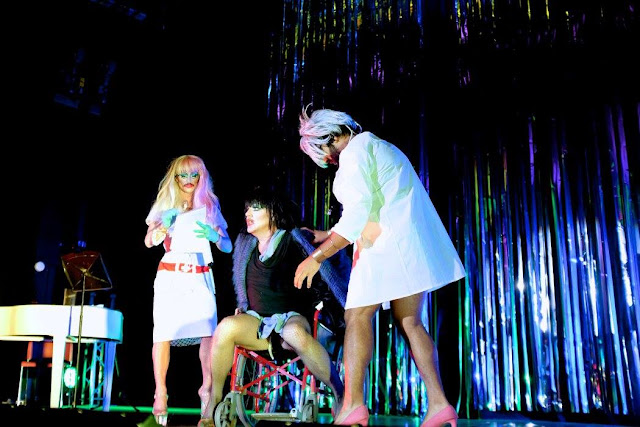 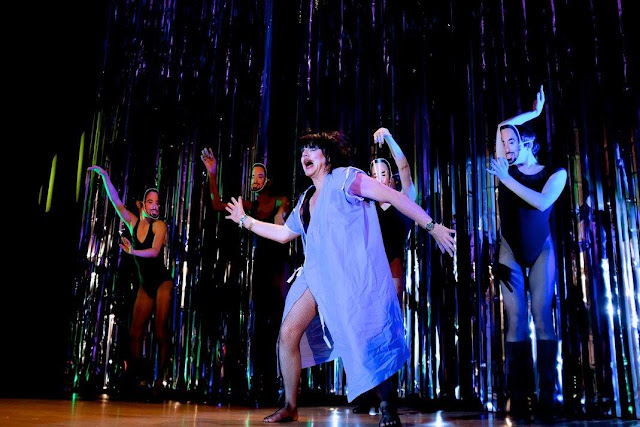 I didn’t catch his name, but I also loved the queen with the tinsel wig and glitter-dusted mustache who performed a berserk lip-synch to the title song “Liza with a Z” in which Minnelli works herself up into an increasingly foaming-at-the-mouth frenzy explaining how to spell and pronounce her name. (When I was posting photos on my phone onto Facebook, auto-correct kept changing “Liza” to “Lisa” and I thought, “That’s exactly what Liza was protesting about!”). I don’t have any footage of him, but here is the original.

The aftermath: afterwards, drunk, we did precisely what Liza Minnelli herself would have done - rampaged through the streets of Stoke Newington on the hunt for fried chicken. 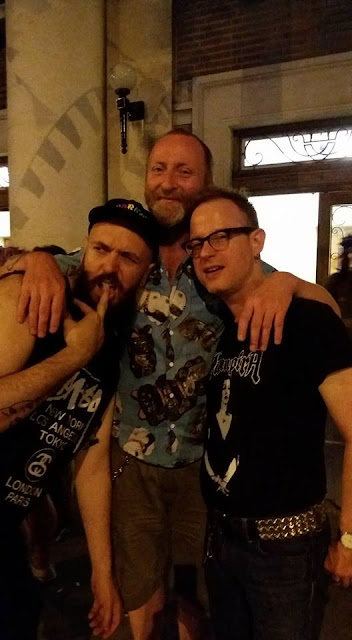 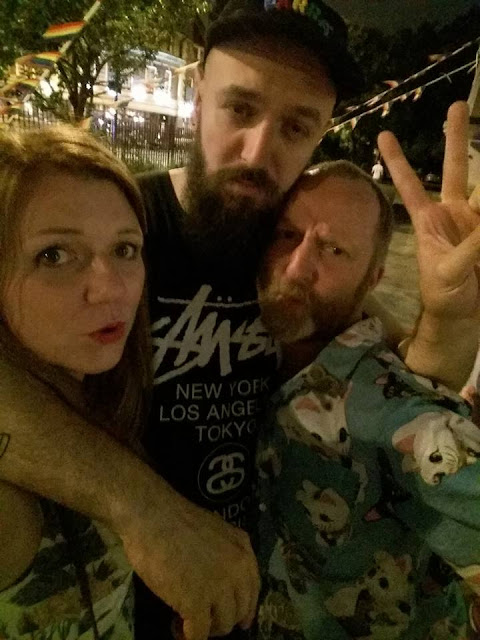 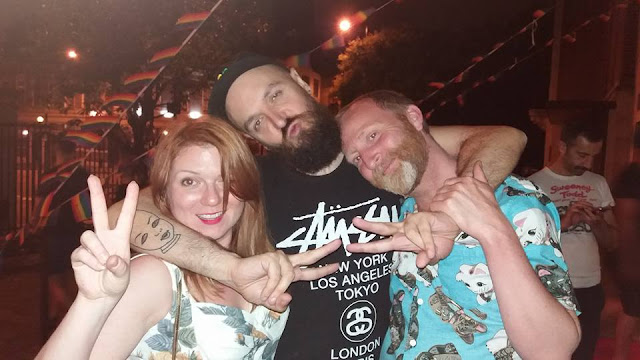 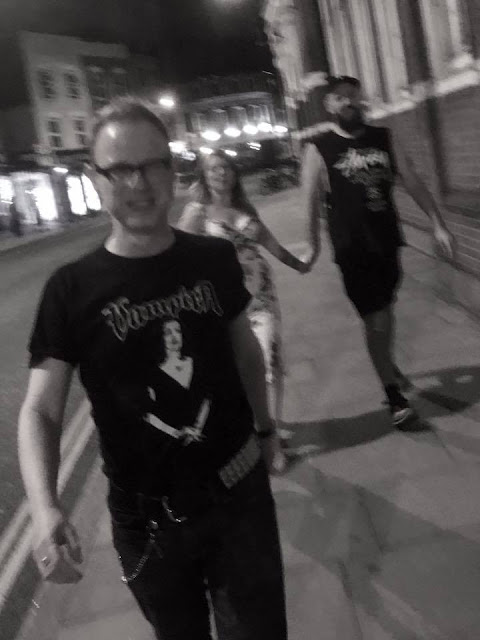 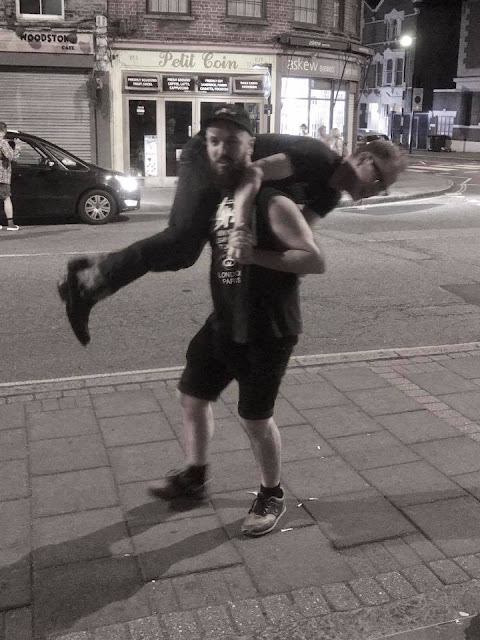 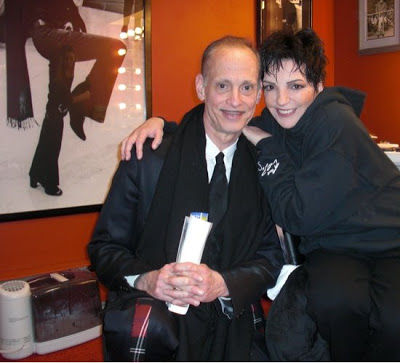 
/ In closing: Liza Minnelli jumping (belatedly) on the disco bandwagon and absolutely slaughtering Donna Summer's "Bad Girls" in 1980 /
Posted by bitter69uk at 05:48 No comments:

Club 82 Exhibit at The Horse Hospital 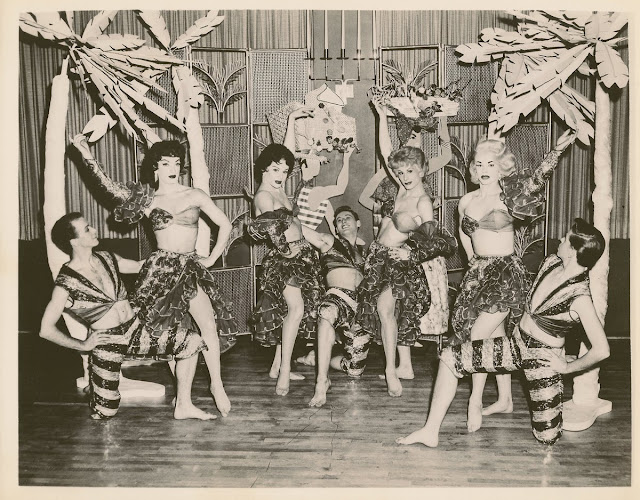 / Typical drag revue at Club 82 in the fifties. All that bamboo! Tiki heaven! /

"The Horse Hospital is proud to present an installation of rare photographs, brochures and related documents from the notorious Club 82, an outrageous drag club that operated exclusively in New York East Village from 1953 until the mid 1970s. The basement club was home to a host of famous female impersonators and gained a reputation for vivid and extravagant live shows, celebrity clientele and raucous soirees.

Before the Stonewall riots of 1969, openly gay bars and clubs were illegal. Club 82, like many other “gay” establishments of the time who sought impunity from the authorities, was reportedly owned and operated by the mafia. Slipping through the grasp of the law, the club’s popularity grew with both heterosexual and gay clientele.

As Club 82 flourished, the USA’s top female impersonators flocked to the club in search of employment, some holding jobs there for decades. The Revue – the clubs in-house stage show – was directed by Kitt Russell, a US Navy veteran revered as “America’s top femme mimic”. Their live-shows were complex and labour intensive productions combining innovative stagecraft, scored music, and complex choreographies. They were known for their dazzling costume design and high production values – one theatre programme stating: “The skillful design of our underwater scenes is the work of Terry Lane. They are all quite beautiful, but actually it would have been much less expensive to flood the club.”

However the burgeoning LGBT rights movement of the 1970’s would see laws and public opinion change, consequently elicit drag clubs like Club 82 either closed their doors or adapted into more conventional venues. By 1974 the New York Dolls, and other Punk bands had played there in an effort to keep its doors open, but sadly it remained a relic of a different time, and in the end nothing could save it. This exhibition uncovers an important and little known chapter of queer culture and history in New York at that time." 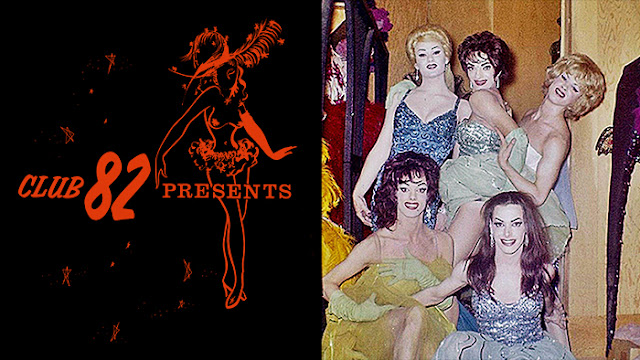 I went to the opening vernissage of the Club 82 exhibit at London's Horse Hospital on 14 July 2017. (Sadly, by the time I post this the exhibit will have closed – it finishes on 5 August. Sorry! )

It offers a fascinating queer social history of the “lost world” of the famous New York drag club, which from 1953 until the early seventies was the reigning “unique nite spot” for “late nite rendez-vous” and “late nite diversion-seekers!” In the realm of Club 82 the performers were called things like “femme impersonators” or “femme mimics” rather than drag queens. The trend for these old-school fifties queens was to be lady-like and ultra femme, with the main aim of convincingly “passing” via bouffant wigs, sequinned cocktail sheaths or showgirl outfits. Later in the sixties and early seventies the Warhol drag superstars, the Cockettes and then Divine would well and truly rip up that template for something punkier and freakier – but it’s a sweetly nostalgic pre-Stonewall image to re-visit and appreciate. (Club 82 also boasted tuxedoed waiters and bartenders with Brylcreemed hair – who were in fact butch drag kings). Interestingly, from what I can gather Club 82’s clientele was mixed. In those days straight people liked to prove how cosmopolitan and daring they were by visiting taboo, exotic and “forbidden” clubs like this for a taste of La Dolce Vita decadence! 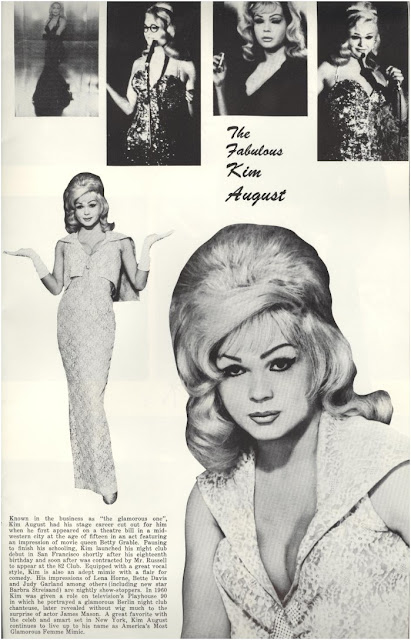 The Horse Hospital exhibit is tiny but dense with information. The walls are lined with a display of rare brochures, photos and magazine articles. The highlight is the amazing slideshow of images of the Club 82’s elaborate drag stage productions. This is accompanied by a great soundtrack of actual recordings from Club 82 drag revues: you hear snatches of risqué “blue” comedians doing their routines alongside smoky jazz and lounge music. It’s very atmospheric and creates a sleazy nightclub ambiance.

Here's a few photos I snatched at the opening preview: 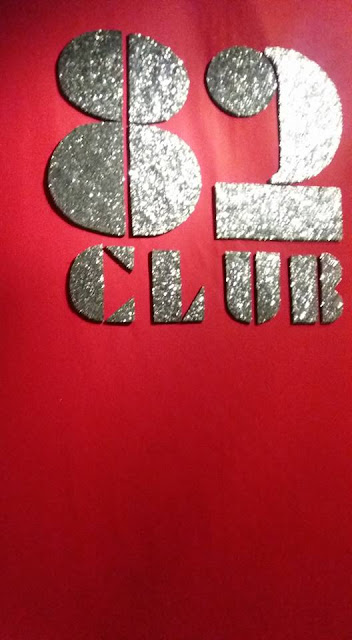 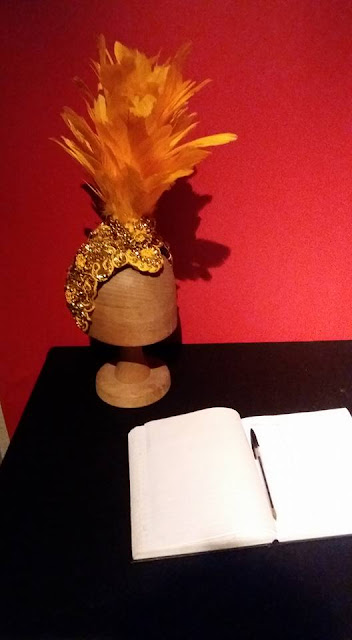 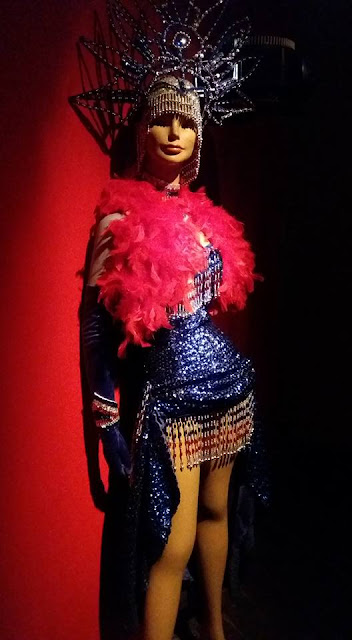 For a treasure trove of more info and photos pertaining to Club 82, visit here