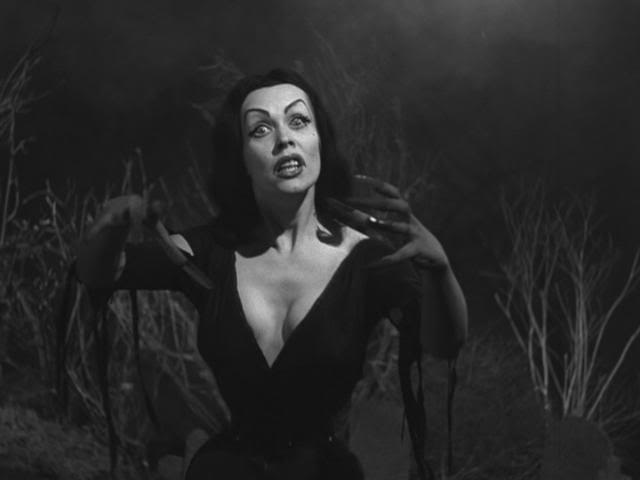 / Above: Vampira - the ultimate Halloween pin-up /

Seeing as how this time it fell on 20 October, it qualified as the Hallowe'en Dr Sketchy. Our elegant emcee Dusty Limits wore special cadaverous make-up to mark the occasion, and needless to say it was a great excuse for me to go heavy on the kitschy 1950s and 60s Halloween novelty records: think Screamin’ Jay Hawkins, Screaming Lord Sutch -- loads of screaming, basically. Inevitably I played the daddy of all Halloween novelty records – “Monster Mash” by Bobby “Boris” Pickett – but I saved it until the end of the night. I also worked in some weird curiosities: The Yma Sumac track comes from her 1957 Legend of the Jivaro album with the infamous cover of her hovering over a steaming cauldron, contemplating a shrunken head: it sounds like a voodoo priestess casting a spell. And a spine-tingling instrumental from a genuine Satanist: Anton LaVey, High Priest of the Church of Satan, was also a musician – and a friend of Jayne Mansfield. (See below. The photo is faded, but that's a skull Jayne is clutching). 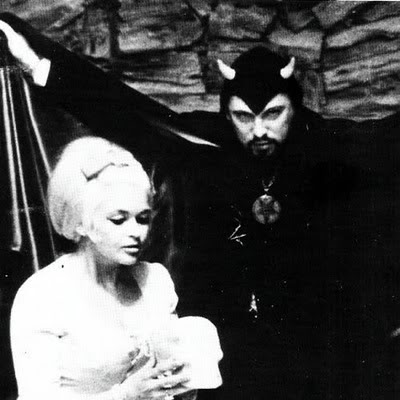 My favourite Halloween record, though, is by the more obscure and enigmatic Tarantula Ghoul. Like Vampira before her and Elvira afterwards, Ghoul provided campy comedic introductions to horror films as the macabre Morticia Addams-like hostess of her own weekly TV show called House of Horror in 1957 – 1959 in Portland, Oregon. Sadly no footage of the show survives, but backed by her band The Gravediggers Ghoul cut one immortal single in her brief heyday: “Graveyard Rock” /”King Kong” (both songs are so good it qualifies as a double A-side!). Listening to Tarantula Ghoul’s sexily malevolent purring voice (pitched somewhere between Tallulah Bankhead and Eartha "I Want to Be Evil" Kitt) makes me wish everyday was Halloween. Read more about the alluring Ms Ghoul here; you can listen to and download “Graveyard Rock”/”King Kong” here. 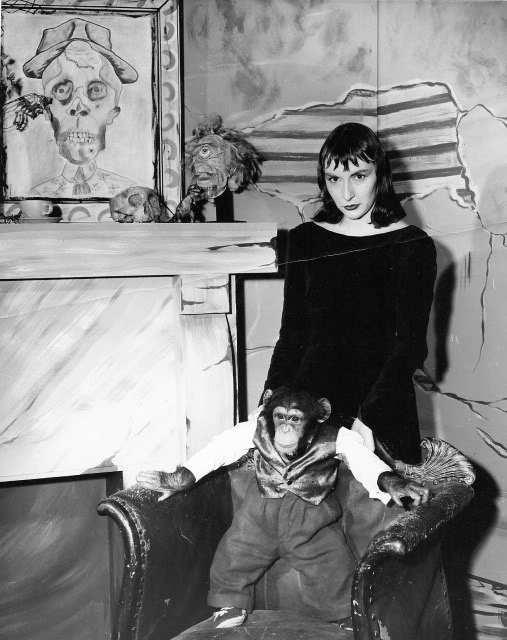 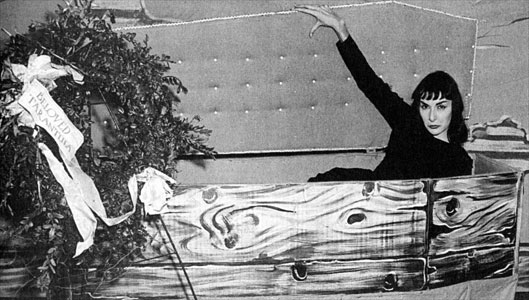 Anyway, it was a fun night: the two featured models / performers (Agent Lynch and Lumberjack Luke) were both great and the legendary Royal Vauxhall Tavern is my favourite venue to DJ at. I hope the set list below might provide some inspiration for anyone planning a Halloween party.

In a similar vein: I found an old interview with Poison Ivy and the late Lux Interior (RIP) of The Cramps (a band that warped me at a young age) in an issue of Details magazine from 1994. They give tips on how to make your Halloween party truly memorable:

Put Valium in the punch bowl * Play music loud enough so guests are forced to do anything but talk * Throw out guests who whine for white wine * Give home perms, tattoos and / or bikini waxes to guests who pass out

The article concludes with a recipe for their toxic-sounding Poison Ivy’s Scarlet Sangria:

To one large cauldron add:
13 pints blood-red wine. 1 #5 beaker cognac. 69 cc’s Cointreau, and slivers of blood oranges. For a really dramatic effect, light with a blowtorch and set fire to the house as you serve. Kills eight

/ Below: contestants in a 1950s Vampira lookalike contest. Some of these chicks are even scarier than they intended to be -- the one on the far right with the white belt looks like she should be entering a Margaret Hamilton as The Wicked Witch of the West contest / 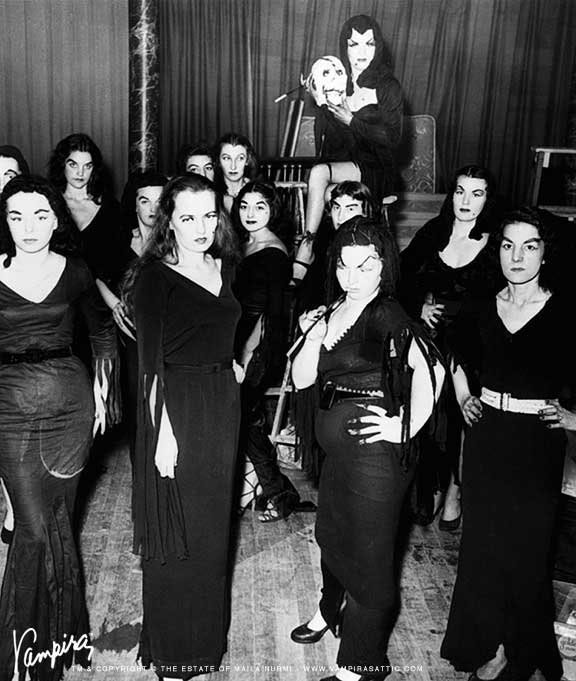 / Below: the genuine article / 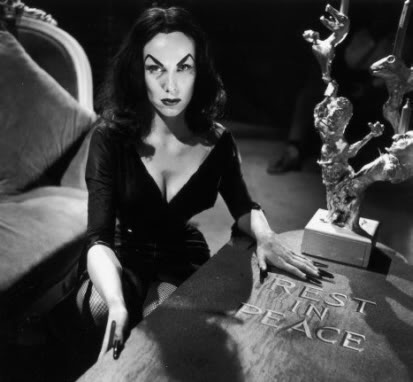 A special thank you to Steve "Evil" Eden for sharing his stash of Halloween novelty songs with me. 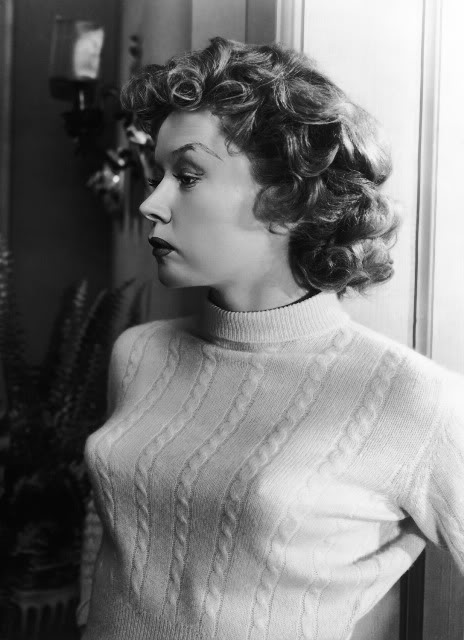 / Above: Perma-pouting film noir icon Gloria Grahame in sweater girl mode, demonstrating how best to fill out a bullet bra /

Getting to the venue was a chaotic, sweat-drenched nightmare, but even the tube strike didn't dampen what turned out to be a fun night. The featured performer and model was Beau Burlington. For one of her poses she worked a motorcycle mama / rock chick look (black leather jacket, long black boots), so I cranked up some female-fronted rockabilly: Wanda Jackson, Jackie De Shannon and a sultry psychobilly deconstruction of the old Peggy Lee standard “Woman” by my old mates Empress of Fur.

For one of Beau’s earlier poses I played a great new discovery. I love the jazz staple “Caravan”, and this accordion-driven version by The Dell Trio is the most berserk I’ve ever heard – so lurching, abrasive and frantic, it sounds like it could be played under the opening credits of a horror film. Listen to it here on the great blog The Homoerratic Radio Show.

Sleazy does it ... my all-time favourite actor, the ultra-suave Robert Mitchum, was an underrated singer.

Resident emcee Dusty Limits suggested the theme "autumn" -- a good excuse to play Juliette Greco's version of the classic chanson "Les Feuilles Mortes", followed by Eartha Kitt singing the English language version, "Autumn Leaves." Here La Greco gives an exquisite and intense performance of "Les Feuilles Mortes" on German TV in the early 70s -- but check out how stony-faced and unmoved the tuxedo-clad audience is at the end. Tough crowd!

People often ask me, So what kind of music do you play at Dr Sketchy? Obviously it covers a wide range of various styles of kitsch and vintage sleaze, but strictly speaking the technical term for much of what I play is “Tittyshaker.” Think desperate, grinding instrumentals propelled by honking saxophone designed for strippers to rotate their nipple tassels to; the soundtracks of grainy black and white 1950s and 60s sexploitation B-movies; sequinned go-go dancers writhing in a cage ... and you’re on the right track. If you're curious to hear more, this excellent website is devoted to the dark art of the tittyshaker.

For all your Dr Sketchy needs, go to the website.
Posted by bitter69uk at 12:32 No comments: