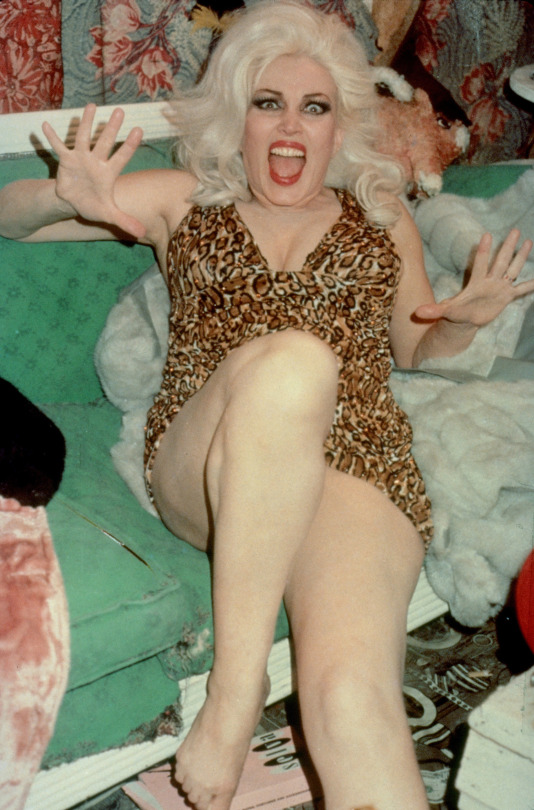 Could you be the filthiest person alive? Then this is your church: a 12-hour mass in praise of the Pope of Trash. Brought to you by anarchic promoters Amy Grimehouse, it promises all the camp hysteria and debauchery you'll find in Waters's celebrated movies – obscenity and health and safety laws permitting. As well as a marathon Waters screening session (including an Odorama version of Polyester), expect cabaret and live music performances, a Hairspray-like ball (featuring Corny Collins dance lessons), bizarre competitions, trampolining, an "eat your makeup" stall and a "tea bagging booth" (we're not sure either). Dressing up is compulsory, but be warned: not even Divine could stay looking like Divine for 12 hours. 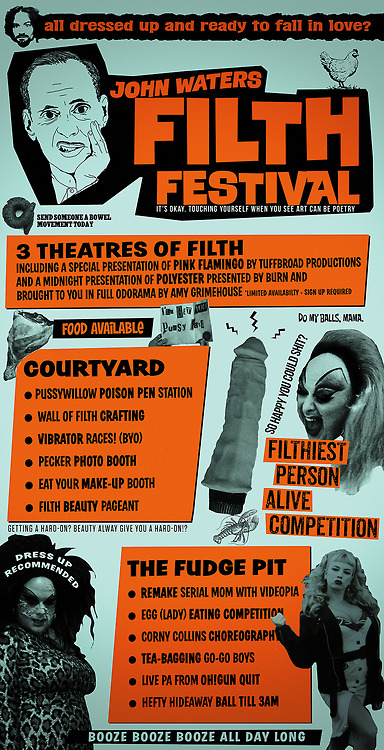 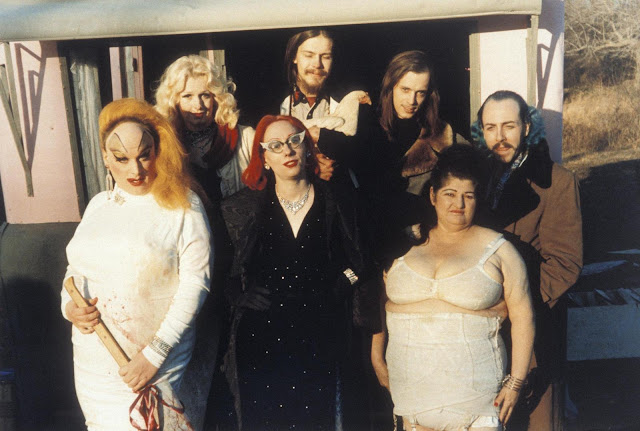 My slavish reverence for the oeuvre of cinema’s sleaze John Waters is pretty well-documented. (Interviewing him in 2010 was the pinnacle of my journalism career. My semi-regular club night Lobotomy Room is virtually a tribute to Waters). So as well as being honoured to be asked in the first place, DJ’ing at the triumphant mondo trasho John Waters Filth Fest (organised by immersive cult cinema / arts club organisers Amy Grimehouse) fit me like a tight (wet) t-shirt.

/ Talented photographer Elissa Cray was in attendance taking portraits of the clubbers all night. She took this glamour shot of me early on. (The Jayne Mansfield cheesecake pose was her idea) /

Described as a celebration of all things John Waters, the Filth Fest inevitably included screenings of beloved Waters trash masturpieces (sic) (including Crybaby, Desperate Living, Multiple Maniacs, Serial Mom and Polyester, complete with scratch’n’sniff Odorama cards). But it also incorporated live music (the band Oh! Gunquit), performance art, vibrator racing, an “eat your make-up” stall, Corny Collins Show-style dance classes and the crème de la crème of London’s hippest drag queens emceeing and cavorting in various stages of undress (they truly are the progeny of Divine).  Sadly, the tea bagging booth didn't seem to happen – I would have been up for that!


/ I call this Christophina Makes a New Friend: My friend (aka "Christopher") with a slut dropping Baby Lame. Note the underwear with skid marks and used tampon decorations - an elegant touch /

/ Christophina Makes a New Friend, Part 2: He gets acquainted with Jacqui Potato /

/ Baby Lame (covered in dog food. Oh, god - I hope it's dog food) and Pal. (You can barely see it, but Pal's wearing a Pink Flamingos t-shirt he made himself) /


/ John Sizzle (in costume as Lobstora from Multiple Maniacs) and I. The first words out of his mouth were, "I'm going to rape you!" /

Proceedings reached a sordid climax with the Filthiest Person Alive competition. I missed whole chunks of it because I was in the other room (the Fudge Pit, in fact) sorting out last minute audio issues with the sound engineer but I could see it through the window and it was a truly eye-popping Fellini-esque spectacle. Recall the Cavalcade of Perversions carnival tent in Waters’ 1970 film Multiple Maniacs (vomit eaters, bicycle seat lickers, “men kissing on the lips like lovers”) and you’re on the right track. I can definitely confirm copious nudity was involved. At one point I caught a vivid snatch of performance artist Mouse splashing stark naked in a children’s paddling pool, stuffing dog food into her orifices. An exhibitionistic obese guy with moobs who could suck his own nipples ultimately won. (The choice may have been controversial: the fierce Divine lookalike standing next to me shook his head in silent disapproval). I think the winner’s name was Timothy. At the end of the night, when I had packed my DJ bag and was leaving Timothy was standing outside. He approached and asked if he could come home with me. When I politely declined he asked if I could find him “a special friend.”


/ Contestants in the Filthiest Person competition. Photo by Alex Menace /

/ Contestants in the Filthiest Person competition. Photo by Alex Menace. Note woman in foreground clutching can of Tyskie. Her costume is the most loving reproduction of what Mole McHenry wears in her guise as female wrestler Wrasslin' Rita in Desperate Living (1977). I was in awe. Just look at that lovingly detailed vagina. Also visible: Moan Crawful in Leigh Bowery-esque leopard skin all-in-one /

/ Baby Lame and the winner of the Filthiest Person competition. I think his name was Timothy. As far as I could tell, his primary talent was self nipple-sucking. Photo by Alex Menace /

I DJ’d between 11:30 pm – 2:00 am (then superstar DJ John Sizzle took over). I’m officially spoiled now – I only want to DJ while scantily-clad drag queens do stripper squats and slut drops. And if only every crowd was so wild, freaky, trashy and appreciative: being surrounded by Divine lookalikes (and a few brilliant Mink Stole-as-Connie Marble-in-Pink Flamingos lookalikes) sure is inspiring. (So is swigging from cans of Tyskie). Obviously I seized this as an opportunity to wallow in deep vintage musical sleaze. I alternated tracks from John Waters’ best soundtracks (Pink Flamingos, Female Trouble – there was never an official soundtrack but I pieced it together - Cry-baby, A Dirty Shame) with songs that sound like they could be from John Waters films, incorporating punk, juvenile delinquent rockabilly, surf and greasy rhythm and blues (Waters shares my boundless love for the turbulent Ike and Tina Turner). Playing some Cramps felt pretty compulsory (interesting bit of trivia: The Cramps were approached to provide music for the Cry-baby soundtrack, but none of it was used).

/ "I'm a thief and shit kicker and - uh - I'd like to be famous." Unsurprisingly, there were multiple Divine lookalikes at the Filth Fest. This one was my favourite /

/ I only want to DJ with drag queens doing stripper squats and slut drops from now on. (That's Jacqui Potato in the fuchsia wig) /


/ Dance floor action. By this point Jacqui Potato had stripped down to a jockstrap and was lying on the floor bicycling his legs in the air. This is the only shot I managed of the Mink Stole as Connie Marble in Pink Flamingos lookalike / 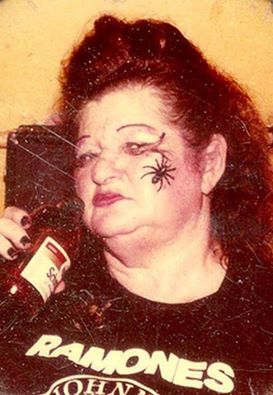 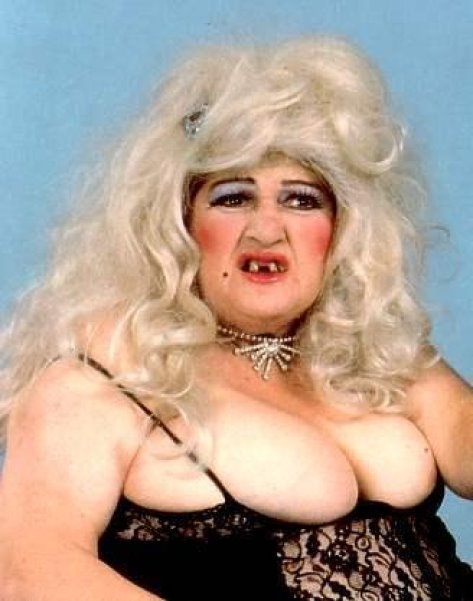 A few numbers by Waters leading ladies Edith Massey and Divine were also de rigueur. I love their abrasive, nasty voices which are somehow alluring and repellent. I always remember someone describing infamous novelty singer Mrs Miller’s voice as sounding like “roaches scurrying across a trash can lid.” How beautiful! What could be more punk than that? It’s a quality that both Divine and Edie share –as does Wayne / Jayne County (punk’s Venus with a penis) or Kembra Pfahler, frontwoman of New York’s Voluptuous Horror of Karen Black. (I played “Pillowcase” by the latter. The snarled chorus of “painted lips, false eyelashes, dyed hair” always makes me think of John Waters films).  “Edie Conquers Godzilla” is banging techno music overlaid with samples of Massey’s dialogue from various Waters films (“I’m in a heavenly mood today!” she squawks as Cuddles in Polyester). “Punks Get off the Grass” dates from when Massey good naturedly jumped on the punk bandwagon, donning her black leather dominatrix outfit from Female Trouble and hitting the road backed by a New Wave band.  Hog Princess Divine ultimately saved my ass: at one point I was bursting for a slash – every DJ’s nightmare. Rockabilly and punk songs rarely last more than two minutes. I stuck on Divine’s six minute rancid hi-NRG disco version of Sam Cooke’s "Twistin’ the Night Away". I could actually hear her lecherous raspy voice booming from the urinal, so I knew I had time to rush back.


/ Grab life by the boobs: John Sizzle having his tits groped by an admirer /


/ Nice rack! John Sizzle in action. How many nipples can you count? /

Postscript: Last weekend I re-visited the John Waters’ mid-period trash masterpiece Polyester (1981). I have it on DVD but hadn't watched it in years. It was screened at midnight at the Filth Fest but by then I was deep into DJ’ing in the Fudge Pit. Think of it as a transitional work between Desperate Living (1977) and Hairspray (1988). It represents Waters’ tribute to two of his key influences – William Castle and Douglas Sirk – and as the long-suffering suburban housewife Francine Fishpaw, features one of Divine’s best and most sympathetic performances. It also represents the last screen performance by the ultimate “outsider actress” Massey (1918-1984) as Francine’s friend Cuddles in a Waters film. For me, Massey and Divine together is one of the great comedic partnerships – like Lucy Ricardo and Ethel Mertz for freaks, queers and punks. 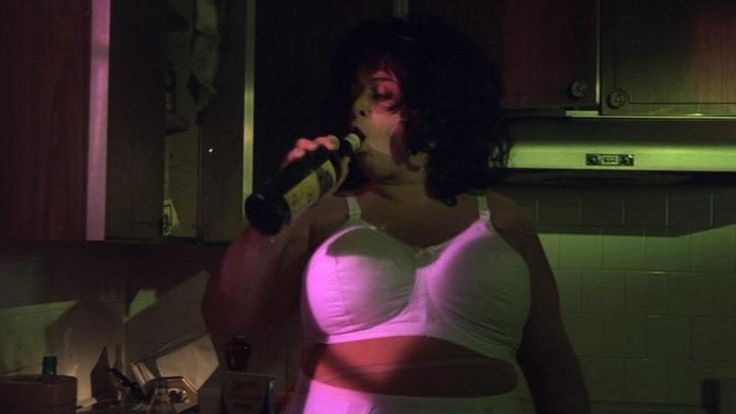 Further postscript: The Filth Fest was such a success it looks likely to become an annual event.

/ Above and below: Divine as defiant bad girl and career criminal Dawn Davenport in Female Trouble (1974) / 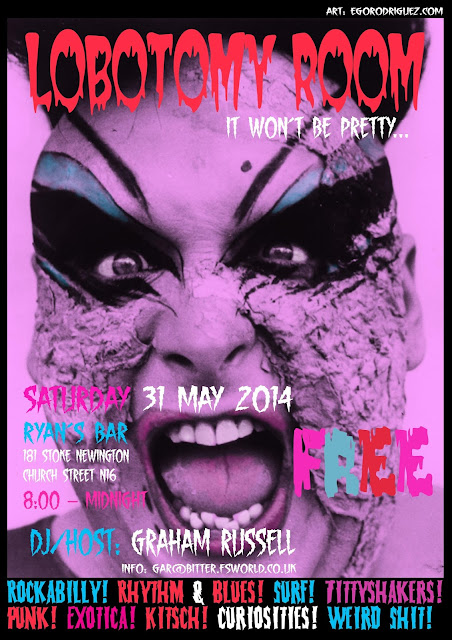 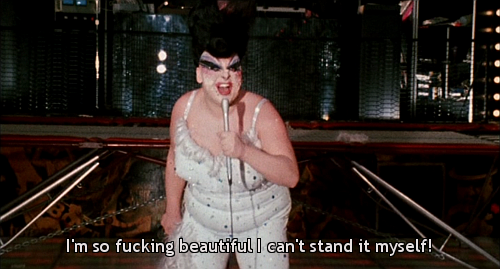 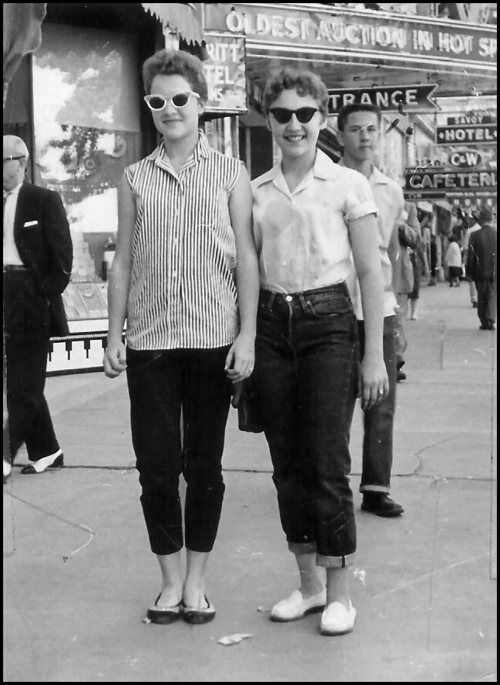 This installment of Cockabilly (London’s monthly punkabilly beer blast at The George and Dragon in Shoreditch) was notable for a bittersweet reunion with my old friend Lisa Cunningham. I spent much of the 1990s propping up various bars with this crazy psychobilly chick (More than Vegas at The St Moritz on Wardour Street, the tough-as-nails Elephant’s Head in Camden Town when it was still scary good fun, assorted Frat Shacks and El Vez gigs). She’s splitting London soon to start a new life near Wales with her husband. Much as I am excited for Lisa, I sure will miss her pretty face! (And props as well to my friends Eric and Sarah who also came this time.) 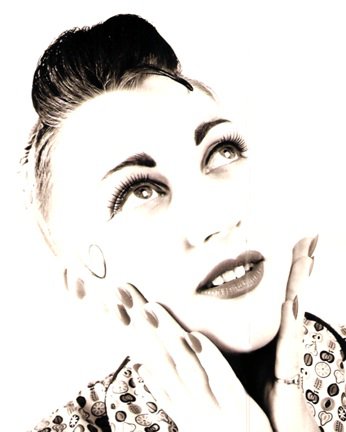 / Punk pin-up: glamorous kiss-curled Lisa in the 1990s - very much what she looked like when I first met her in the rockabilly fleshpots of London /

As always, it was a blast to guest DJ alongside Mal Nicholson and Elma Wolf, playing my most fetid vintage musical sleaze offerings at blistering volume to a heaving, sexy crowd at The George and Dragon, and the lager was a-flowing. (I was DJ’ing the next night at the mondo 12-hour John Waters-inspired Filth Fest. When I was trying to rouse myself Saturday I definitely regretted the lager had flowed quite so freely. Rest assured the triumphant Filth Fest will be a whole separate blog soon). 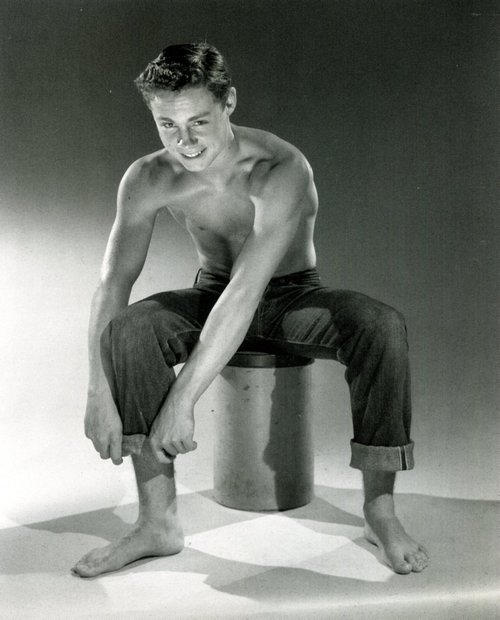 / It's so important to get your turn-ups just right /

Now: to raise the tone - a bit of art. I’d argue Pink Narcissus (1971) is one of the essential homoerotic classicks (sic) of underground cinema (alongside Jean Genet’s Un chant d’amour, Kenneth Anger’s Scorpio Rising and Warhol’s My Hustler) all homosexualists should see at least once. I recently revisited Pink Narcissus for the first time in over twenty years. (I’d only seen it once before - at the now-defunct, much-missed Scala Cinema in London, which shut in 1993). Simultaneously avant-garde and kitsch, it’s as trippy, weird and sexy as I remembered. For director James Bidgood, Pink Narcissus was an obsessive labour of love: made on a shoe-string budget, seven years in production (from 1963 to 1970), all filmed entirely within his own compact Manhattan apartment (even the “exterior” street scenes). The hot neon shocking pink and blue-hued photography is exquisite (Pierre et Gilles swiped this whole style for their own camp sensibility). Beauteous leading man Bobby Kendall (a teenage runaway when Bidgood scooped him up; he never made another film) has the greatest, noblest and most poetic male ass ever captured on film (perhaps second only to Joe Dallesandro’s). (You can watch a reasonably OK version of Pink Narcissus here. Warning - it's a porn site!) 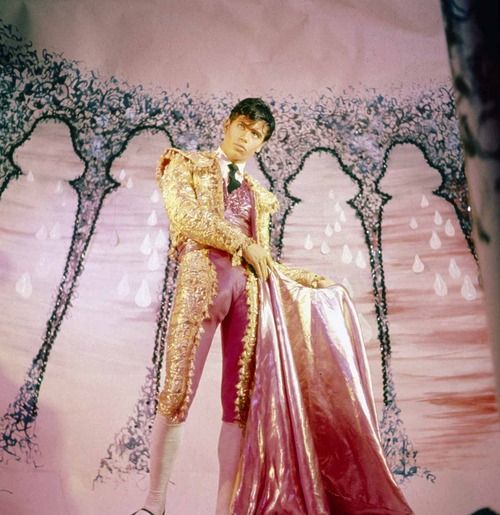 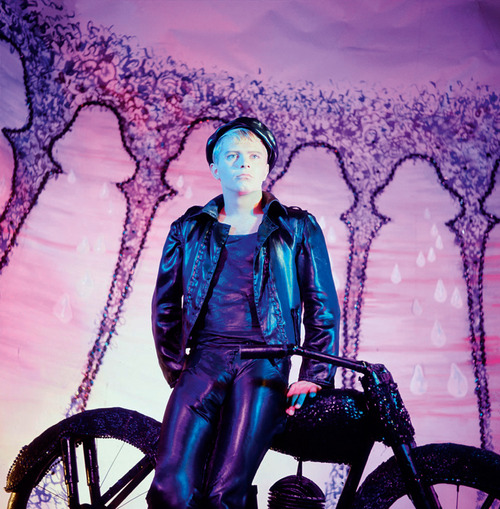 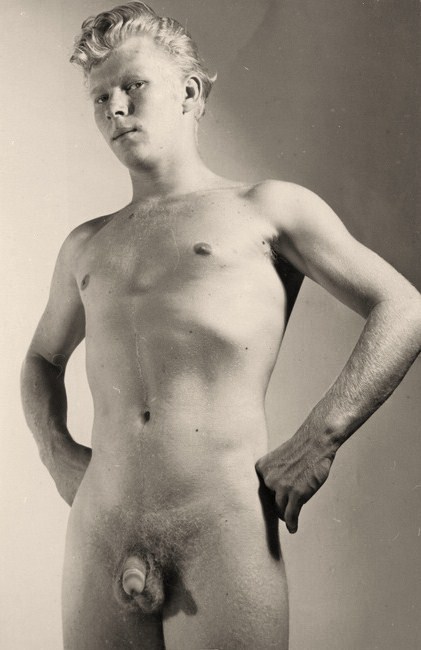 / If you've read down this far, you're rewarded with a bonus vintage homoerotic nudie cutie. Who doesn't love a natural blond? Via /

If you don't already, follow my squalid and tawdry tumblr page
Posted by bitter69uk at 13:22 No comments: