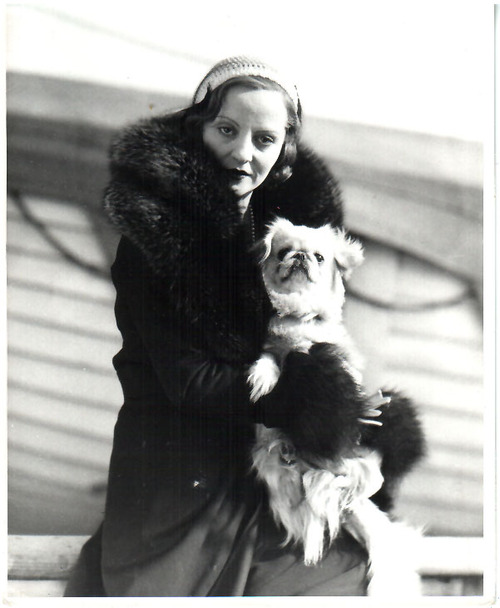 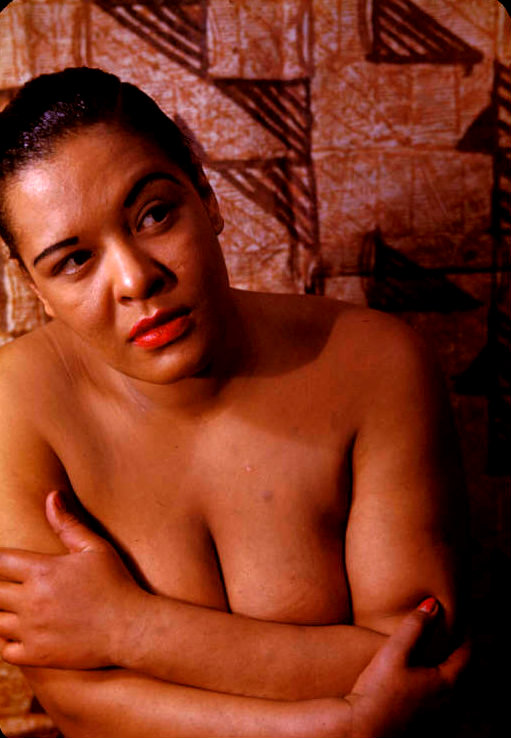 The intimate friendship between dissolute husky-voiced first lady of the American stage Tallulah Bankhead (1902-1968) and the great doomed jazz chanteuse Billie Holiday (1915-1959) spanned at least two decades – from the golden age of 1930s Harlem cafe society until the mid-1950s. “Tally and Lady were like sisters,” as one observer put it. Fierce, stylish sisters with a tinge of incest, apparently.

From Joel Lobenthal’s 2005 biography Tallulah! The Life and Times of a Leading Lady:

Tallulah’s relationships, of course, seldom observed clear-cut boundaries, and it appears that during the late 1940s she and Holiday were also lovers. Perhaps they had been all along.  Holiday later told William Dufty, who ghostwrote her autobiography, that when Tallulah visited backstage at the Strand Theatre, the thrill she took in exhibitionistic sex made her insist on keeping Holiday’s dressing room door open. Holiday later claimed that Tallulah’s brazen show of affection almost cost her her job at the Strand.

John Levy was also Holiday’s lover as well as her manager at the time, and although he was one of the abusive strong men to whom Holiday gravitated, Levy was intimidated by Tallulah and her connections. When Tallulah came around, all he could do was get out of the way. Once at a nightclub he sat at a nearby table watching Tallulah express her affection to Holiday. “Look at that bitch, Carl, look at that!” he exclaimed to musician Carl Drinkard. “That bitch is going out of her fucking mind, she’s all over her.”


A daughter of the patrician Old South who knew a thing or two about breaking taboos, the gloriously hedonistic Tallulah was a bold pioneer when it came to interracial sex – another of her conquests was Hattie McDaniel (yes, Mammy from Gone with the Wind). Sadly, Bankhead and Holiday’s friendship ended acrimoniously around the time of the publication of Lady Sings the Blues, Holiday’s 1956 memoirs. (Bankhead was bedeviled by tabloid scandals at the time and, fearing what dirt Holiday might rake up in her autobiography, abruptly distanced herself from her – probably on the advice of her lawyer). What a shame. Read Holiday’s lacerating and embittered kiss-off letter to Bankhead here. 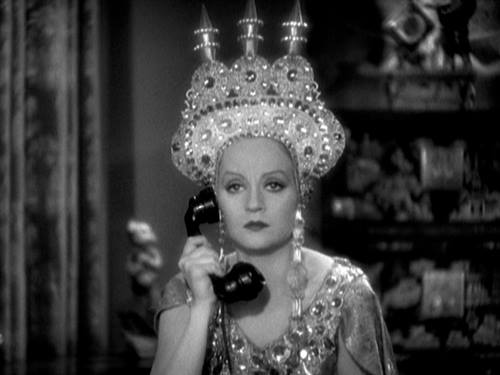 / Bankhead was primarily a stage actress and only made a handful of films. In the early 1930s she was dispatched to Hollywood in the hopes she would become a screen rival to Garbo and Dietrich (in truth, she was the rare American actress who did convincingly exude their kind of heavy-lidded Continental decadence). Unfortunately all her films belly flopped and her Hollywood stint was brief. Here she is in The Cheat (1931), which certainly looks intriguing. I've never seen it, but apparently it’s available to watch in ten-minute segments on Youtube / 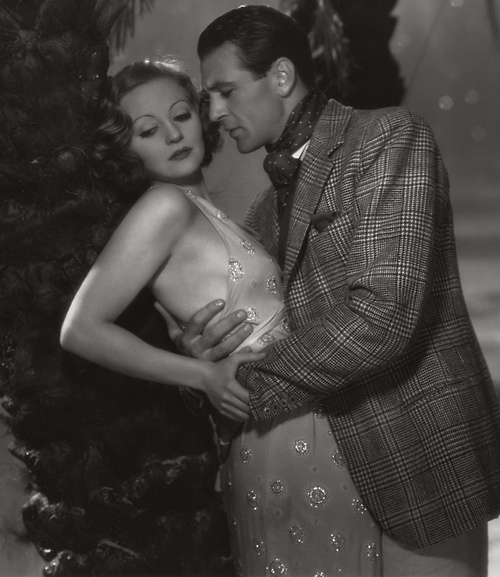 / Sultry Bankhead with delectable leading man Gary Cooper in The Devil and The Deep (1932) – which I have seen and is great, campy fun. Bankhead famously confessed, “The only reason I went to Hollywood was to fuck that divine Gary Cooper.”/ 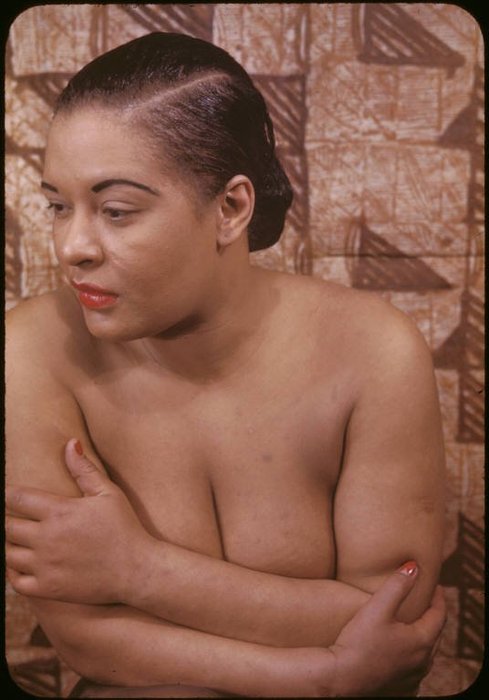 / I think my favourite photos of Billie Holiday ever taken were from this weirdly modern 1949 series by Carl Van Vechten (1880-1964) – which include these sensational nude portraits. Young Holiday looks a bit tough and hard-edged but not yet ravaged. I love how they're clearly un-retouched: you can see the little scar on her face. Her golden skin makes her look like one of Gauguin’s Tahitian beauties. See more here / 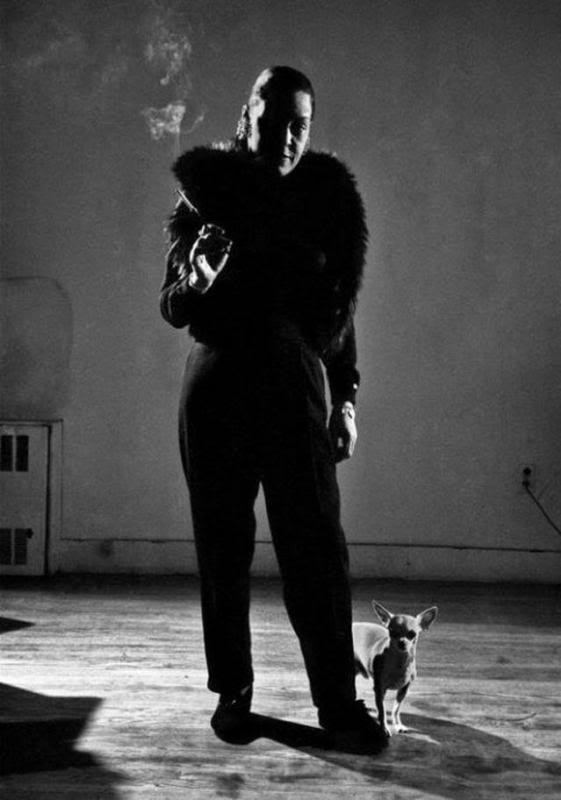 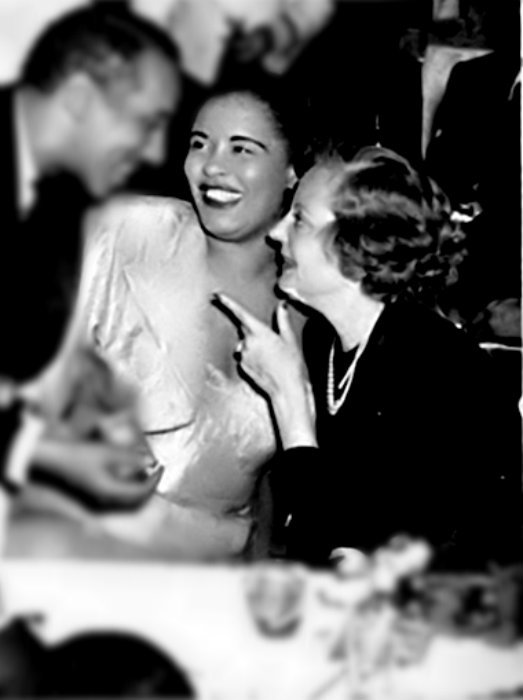 / Rare shot of Billie and Tallulah in happier times, apparently taken at The Strand Theatre circa 1948 /
Posted by bitter69uk at 12:49