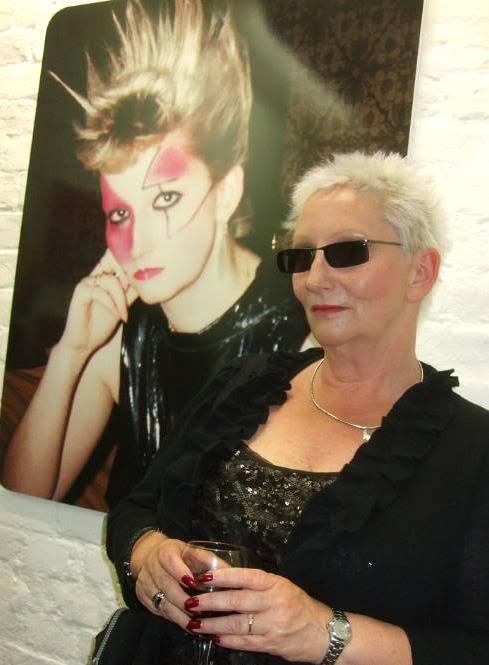 / Punk royalty: Jordan in front of one of Simon Barker's portraits of her. Picture © shapersofthe80s.com /

Over the recent Diamond Jubilee weekend I posted on Facebook a Youtube clip of archetypal punkette Jordan snarling / ineptly lip-synching her way through a a crotch-thrusting, panty-flashing performance of “Rule Britannia” from underground filmmaker Derek Jarman's 1978 cult art film Jubilee. “This is the closest I get to embracing the Jubilee spirit", I explained. Jarman’s nihilistic punk epic is pretty damn incomprehensible (and was loathed by most punks at the time), but has some vivid snatches and indelible images – the most memorable of which is probably Jordan (one of the true, pioneering movers and shakers of early UK punk, a muse to Vivienne Westwood and Malcolm McLaren as well as Jarman, and the original one-woman Sex Pistol) doing stripper squats in a novelty plastic union flag tabard, her white marshmallow thighs (think plump young Dietrich as Lola Lola in The Blue Angel) encased in green stockings.

Weirdly enough, just four days after posting that Facebook status update, I met Jordan herself at the launch party for Simon Barker’s exhibit and accompanying book, Punk’s Dead. For once in my life, I didn’t bring my bleedin’ digital camera, and I don’t have a smartphone – so there are no photos to document this historic encounter! But Jordan autographed a postcard for me. She turned me around and wrote it against my back, gripping my shoulder with her free hand – which melted my teenage punk heart! She’s 57-years old now, silver-haired, mumsy, looks a bit like Su Pollard and radiates unaffected charisma and easy-going, down to earth warmth. We only spoke briefly as she was surrounded by other admirers eager for her attention. I managed to ask her about the striking trademark Cubist mask of make-up she used to wear, saying it looked Picasso-esque. She smilingly explained that’s close, but her true inspiration was the painter Mondrian: she’d wanted to transform her face into a Mondrian painting. Simon Barker himself was in attendance (wearing an immaculate olive green Westwood suit), but the unofficial hostess seemed to be Jordan: everyone at the party gravitated towards her. Happy to stand in front of Barker’s smoldering portraits of her youthful self from 35 years earlier, pose for photos and sign autographs, you can see what would’ve entranced the likes of Johnny Rotten and Sid Vicious in the 1970s. What a woman. 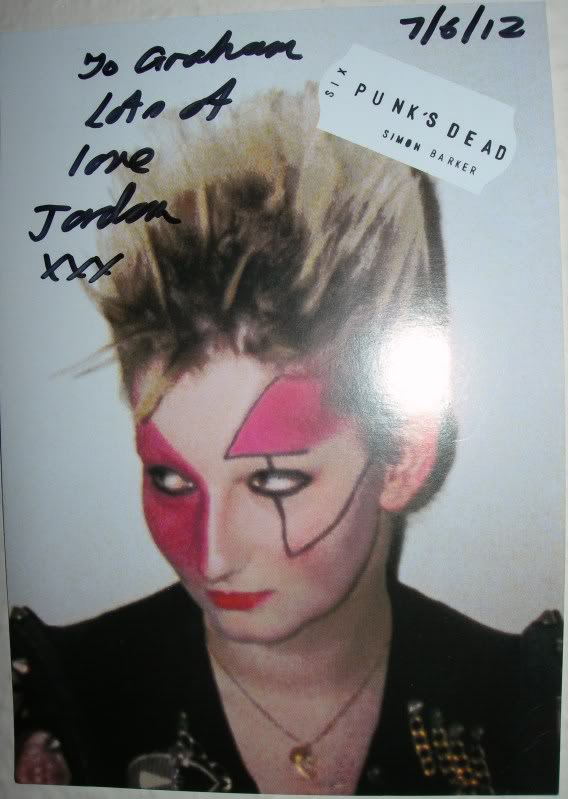 / The postcard Jordan autographed for me. (No, I don't have a scanner) /

To briefly put her into context: If the 1970s London punk subculture had an “It girl”, it was Jordan. Born Pamela Rooke in 1955 in the seaside resort town of Seaford, East Sussex, her startling, idiosyncratic sense of style made her a natural employee selling kinky latex bondage wear at Vivienne Westwood and Malcolm McLaren’s outrageous boutique Sex on London’s King Road when they unleashed it in 1975. It was a perfect fit, as Jon Savage recalls in his definitive 1991 punk history England’s Dreaming. “(Jordan) was a living advertisement for the new shop, having turned her own body into an art object.” With her chalk-white face, no eyebrows, black raccoon-like eye liner, gravity-defying post-Bride of Frankenstein platinum blonde beehive and confrontational demeanour, Jordan was like the ethos of McLaren and Westwood’s Sex concept made voluptuous flesh. Amongst Barker’s photos are some stunning dual portraits of Jordan and Siouxsie Sioux together; by comparison, Jordan makes even stunning young ice princess Siouxsie look relatively normal. (The extremity of Jordan’s look is also almost Divine-like: I can remember John Waters admitting he used to keep a photo of Jordan pinned to the bulletin board above his writing desk for inspiration). 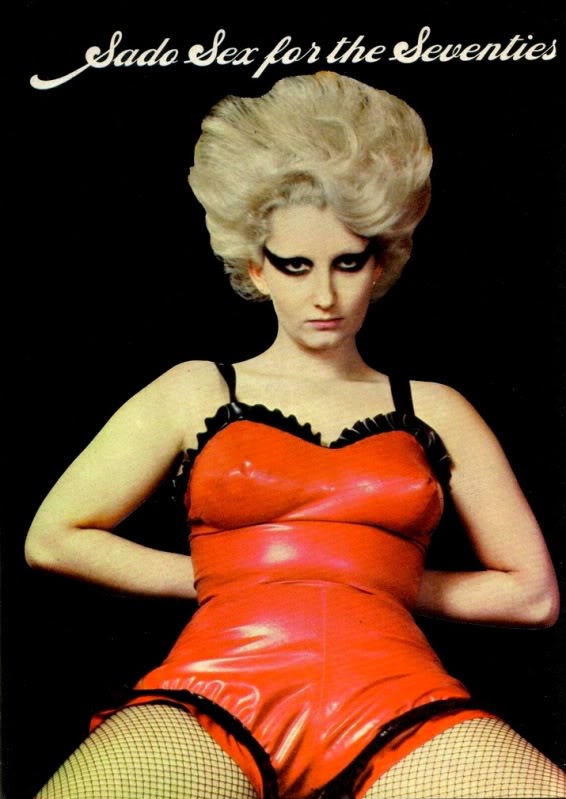 / Punk pin-up Jordan (this photo not by Simon Barker) / 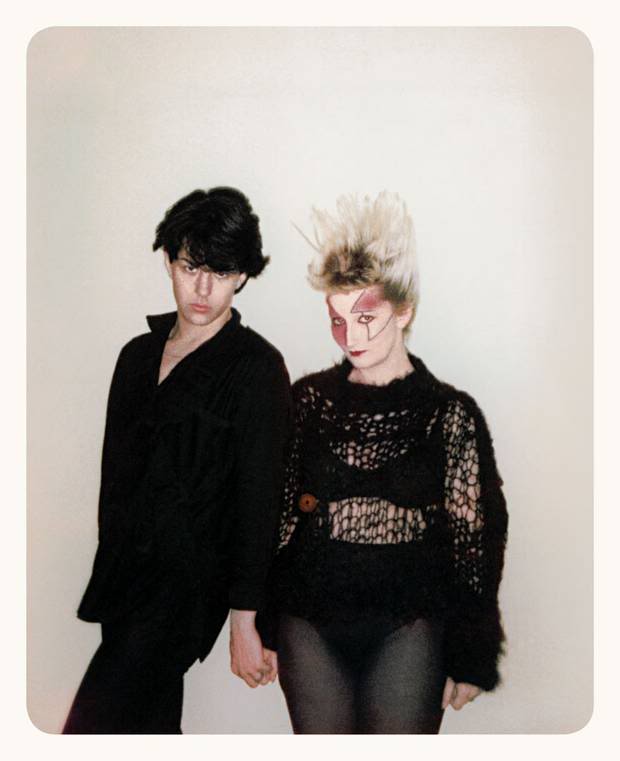 Sex was the epicenter of the emerging punk scene, from where McLaren engineered the creation of its “house band” the Sex Pistols. (Johnny Rotten famously auditioned for the band by caterwauling along to Alice Cooper’s “Eighteen” on the shop’s vintage jukebox). Jordan was virtually the fifth Pistol: at their riotous early gigs, her scantily-clad presence by the front of the stage attracted as much press attention as the band itself. From there, she parlayed her notoriety and striking appearance into roles in the Derek Jarman films Sebastian (1976) and Jubilee (1978). After a brief stint managing Adam and The Ants early in their career, Jordan then exiled herself from punk by the early 1980s, ultimately returning to her native South coast. (She’s been quoted as saying that punk died for her when The Pistols broke up). By then her niche as one of punk’s true fashion icons was already secure. (I hate the word "icon" and rarely use it, but it's fitting here). It was obviously a wise choice, as today Jordan exudes serenity and contentment. These days she works as a veterinary nurse and breeds Burmese cats. (I have friends who also breed pure-bred cats. They report Jordan is frequently sighted at cat shows).

About Simon Barker: As part of the Bromley Contingent, the early, stylish Sex Pistols acolytes who would take the train from the suburbs into central London to attend their gigs, Barker (then nick-named simply “Six”) was a key scene-maker and witness. Luckily for us he also took along his el cheapo, no-frills instant camera with him everywhere (mostly the St James Hotel in London, seemingly various grotty squats) documenting the embryonic punk milieu. At the time, Barker was simply taking shots of his friends at play. Seen today, the photos compiled in Punk’s Dead are compelling documents of the era and compare favourably with the portraits of Nan Goldin, or Billy Name’s 1960s shots of the Andy Warhol Superstars. 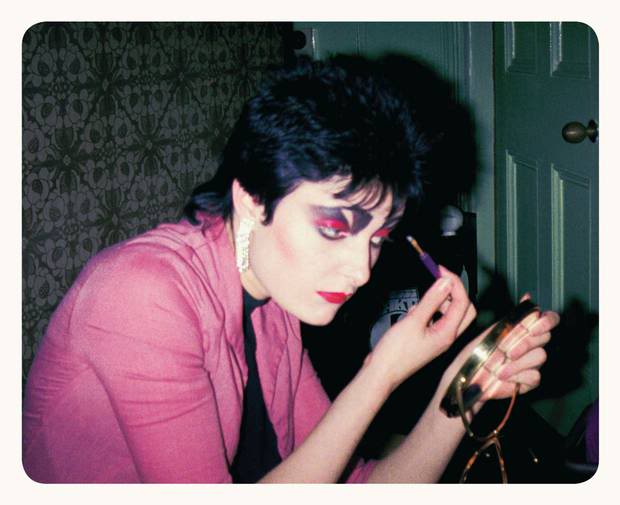 Other faces from the party I recognized: Boy George (very aloof; he kept his dark sunglasses clamped on), Marco Pirroni from Adam and The Ants and fashion model Sara Stockbridge. (Stockbridge was pretty much the official “face” of Vivienne Westwood throughout the 1980s. She’s still strikingly beautiful all these years later, with legs like a race horse and punkily tousled pink hair. Read an interview with Stockwell and see some iconic photos of her modelling Westwood on this excellent fashion blog). 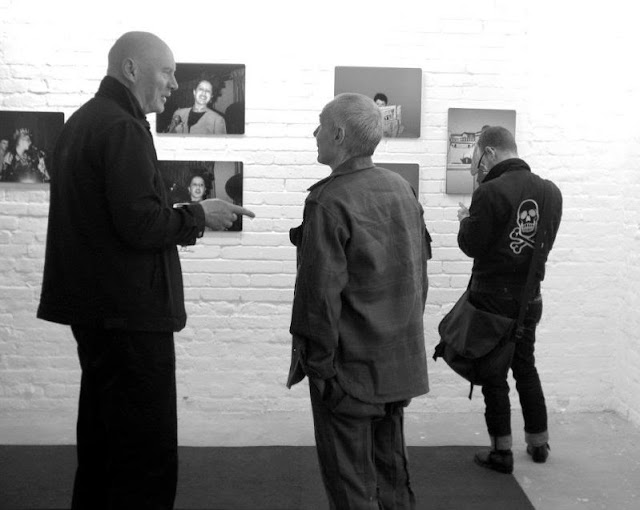 / Photo by Antony Simpson: Simon Barker in the Westwood suit in the centre. That's me on the right texting my friends that they should be here /

Anyway, it was a great night: I drank PINTS of excellent free white wine (hey, I made some donations when I got a re-fill), Barker’s grainy and intimate photos are incredible artifacts (heaven in particular if you’re a hardcore Siouxsie and The Banshees fan like me) and the coffee table book itself is pretty damn covetable. Even better, my friend Antony Simpson was there telling me filthy insider gossip from back in the day. (And no, I’m not repeating it here!). 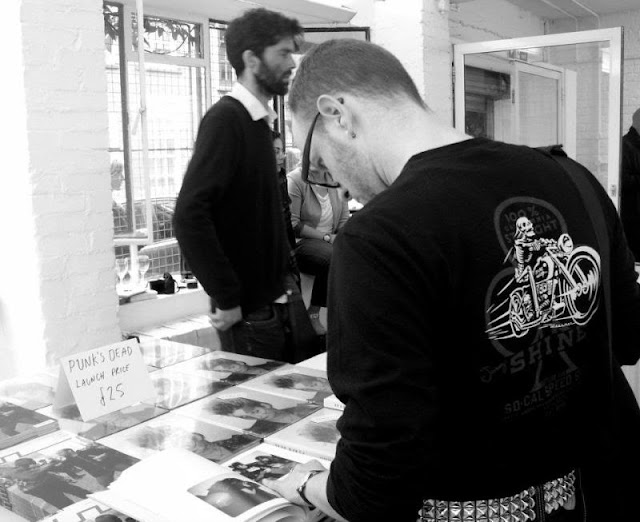 / This guy looks too cheap to buy a book ... But now you know what to get me for Christmas this year. (Photo by Antony Simpson) /

Further reading: The official Punk's Dead website. Nice piece in The Independent. According to this great blog, Simon Barker was in a prickly and uncooperative mood. Punk antagonism lives on!
Posted by bitter69uk at 12:28