Reflections on Anouk Aimée (and her sunglasses) in La Dolce Vita 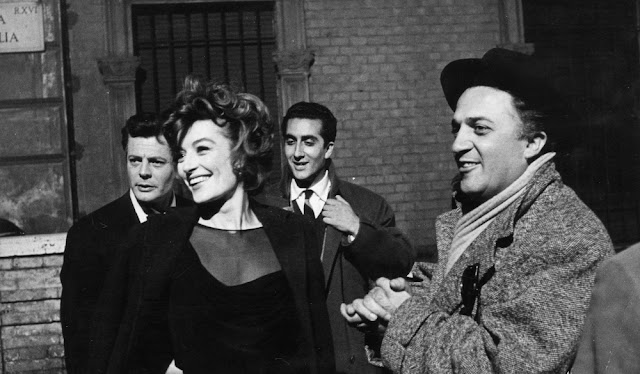 / Marcello Mastroianni, Anouk Aimée and Federico Fellini on the set of La Dolce Vita /
Federico Fellini’s carnival-esque and hallucinatory epic masterpiece La Dolce Vita (1960) takes a state of the nation overview of Rome’s post-war upheaval. The themes of alienation and collapse of conventional morality are personified by the existential angst of Marcello Mastroianni, torn between art (writing the Great Novel; the world of poetry, philosophy and spirituality espoused by his intellectual friends) and commerce (his job as a sensational tabloid journalist writing about debauched cafe society and shallow show business, materialism and decadence). In other words, it’s what Pauline Kael jokingly dismissed as one of “the sick soul of Europe movies”, although for me La Dolce Vita remains a vital and profound film and has lost none of its capacity to thrill. 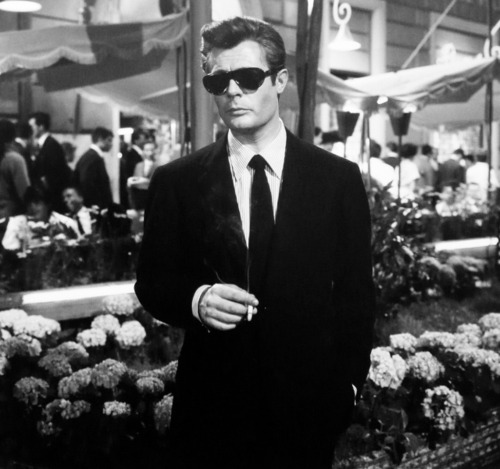 / Marcello Mastroianni in La Dolce Vita: Was any man ever more handsome?! /


The most complex and elusive of Marcello’s women is Aimée as wealthy, jaded nymphomaniac heiress Maddelena. When we first see her, Maddelena is lounging moodily against the bar of a nightclub, her insolent and inscrutable sunglasses clamped-on. Later we will see her wearing them even while driving her Cadillac at night. 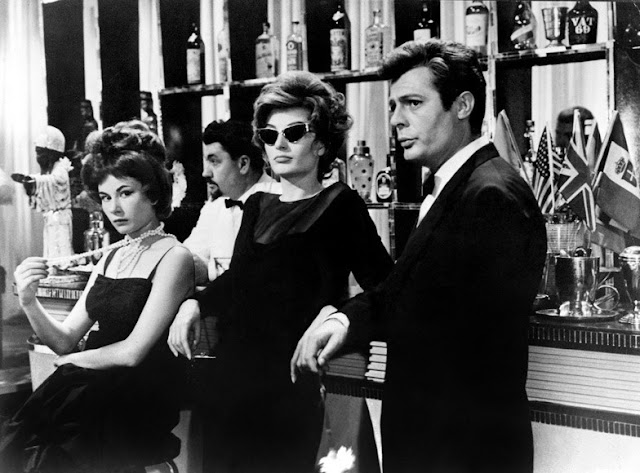 “Everything is wrong tonight,” she kvetches, petulant and unsmiling, to Marcello. Socialite Maddelena is clearly in the grips of an existential crisis. “I’d like to hide, but never manage it ... Rome is such a bore ... I need an entirely new life.” 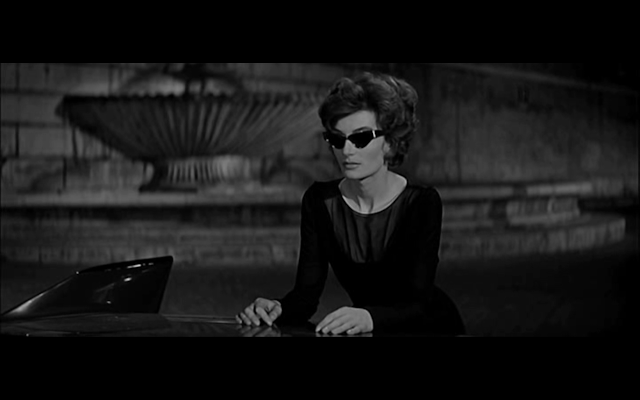 Aimée as Maddelena is the epitome of early 1960s chic: stark black cocktail dress, upswept bouffant hair, those killer shades. She drifts through La Dolce Vita with the hauteur of a catwalk fashion model, or a fashion illustration come to life (angular, willowy and wasp-waisted, Aimée is certainly emaciated enough to be a model; Tom Wolfe would describe her as “starved to perfection”).

The opacity of her black glasses renders Maddelena totally expressionless, emphasising how seemingly dead (or blank or “pretty vacant”) she is inside. Her tangible depression is like a fashion statement. 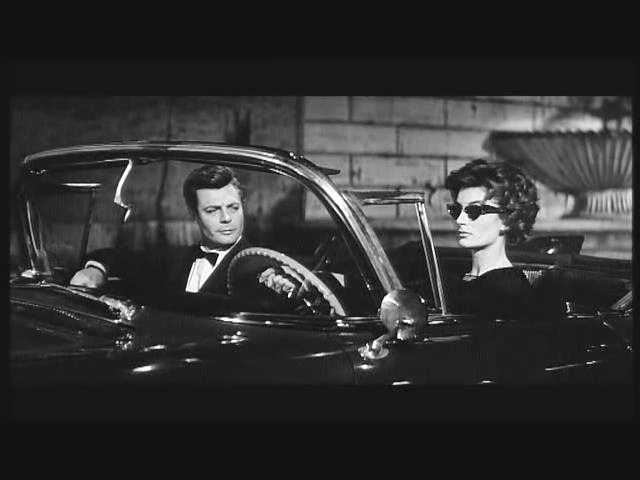 (In her brief screen time, Adriana Moneta imbues the role of the middle-aged prostitute with a gritty, Anna Magnani-ish earth mother warmth. She’d play a similar role the following year for Pier Paolo Pasolini in his debut film, Accattone). 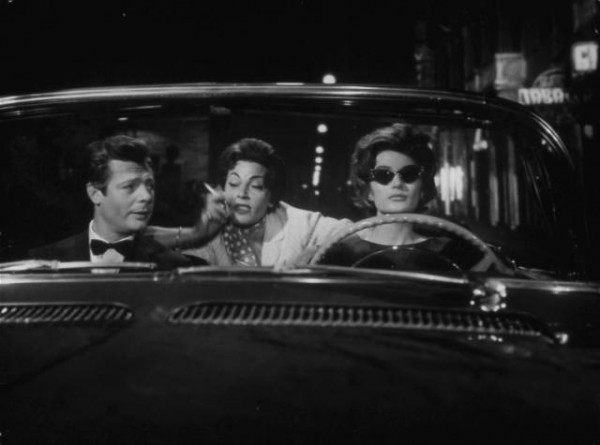 In another kinky and unexpected touch, while in the prostitute’s bedroom Maddelena finally removes her signature sunglasses ... to reveal she’s been hiding a black eye behind them all along. The moment is devastating, revealing a whole other side to Maddelena’s haughty demeanour: a secret troubled and seedy life of depravity and sadomasochism. The viewer can only suspect Maddelena craves violence to snap her out of her terminal ennui. 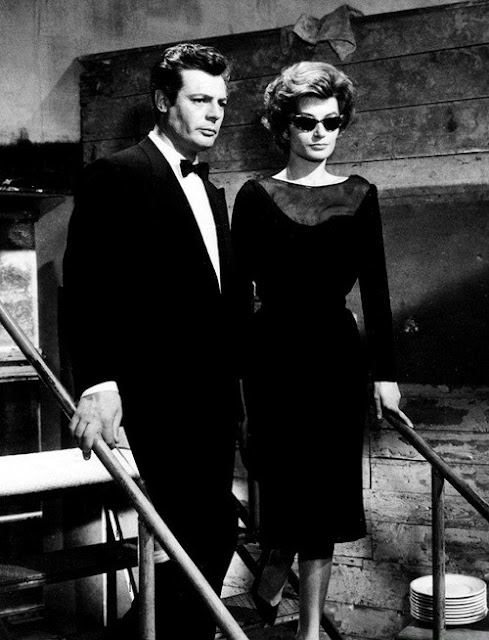 Punk poetess Patti Smith has always been voluble about the influence of 1950s and 60s nouvelle vague and European art cinema on her artistic worldview.  Interviewed for Circus magazine in 1976, Smith described the seismic impact of seeing Aimée in La Dolce Vita as a teenager:


“Besides me wanting to be an artist, I wanted to be a movie star. I don't mean like an American movie star. I mean like Jeanne Moreau or Anouk Aimée in La Dolce Vita. I couldn't believe her in those dark glasses and that black dress and that sports car. I thought that was the heaviest thing I ever saw. Anouk Aimée with that black eye. It made me always want to have a black eye forever. It made me want to get a guy to knock me around. I'd always look great. I got great sunglasses.”

Anouk Aimée (born 1932 as Francoise Sorya Dreyfus. The surname “Aimée” translates as “Beloved”) has been described as “the French Audrey Hepburn”, which only hints at her allure.  While Aimée is every bit as gamine-like and ethereal as Hepburn, she’s far darker and more interesting than that implies. To me, she’s always been one of the great beauties and most haunting actresses of French cinema. By La Dolce Vita, Aimée was already a veteran (she made her debut as a teenager in the 1947 film La Maison sous la Mer). Fellini must have liked her; he cast Aimée again in his film 8 ½ (1963) three years later. With her Modigliani face, feline and inscrutable bearing and whisper-soft voice (her voice in La Dolce Vita was dubbed by an Italian actress), Aimée invests every performance with a remote Garbo-like mystery and capacity for tragedy.  Her melancholic dark eyes evoke graceful, stoical suffering. Certainly her Maddelena is complex, lonely, and even tragic. Fellini implies Marcello and Maddelena would be ideal for each other, if only they were capable of change. “I would like to be your faithful wife,” Maddelena laments to Marcello towards the end of La Dolce Vita, “and have fun like a whore.”

In a long and distinguished international career, the character of Maddelena is one of Anouk Aimée’s greatest accomplishments. 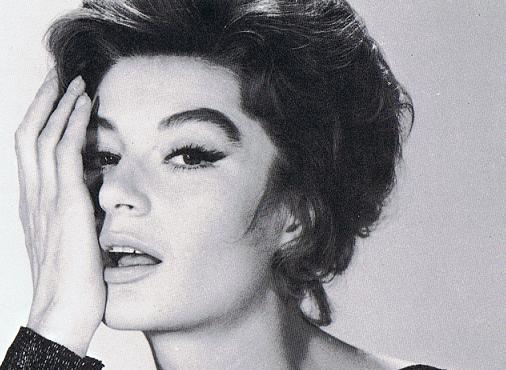 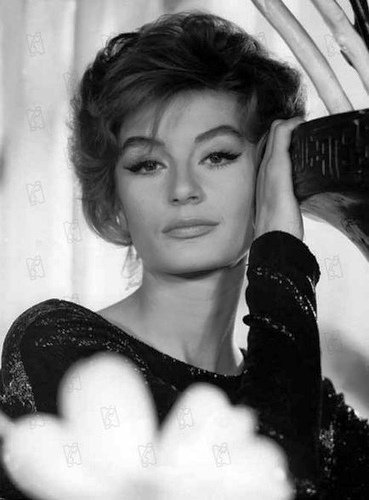 A few years ago fashion designer Tom Ford launched his retro-looking cat's eye sunglasses which he called "Anouk": clearly a tribute to Anouk Aimée and the sunglasses she wears in La Dolce Vita. They come in a choice of black or tortoise shell. 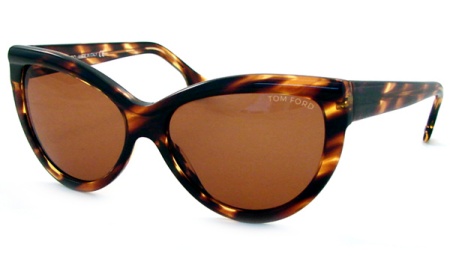