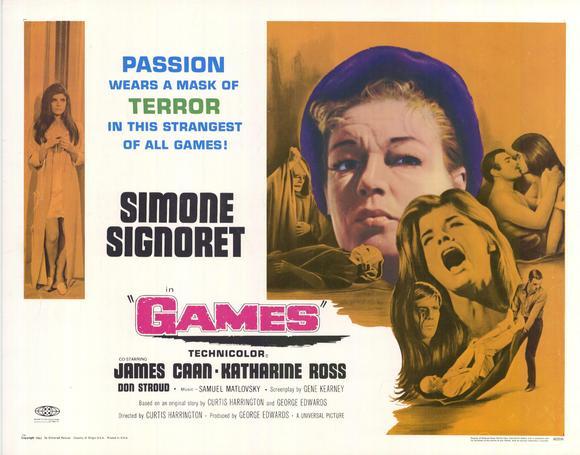 Recently watched: Games (1967). Tagline: “Passion wears a mask of terror in this strangest of all games!” I’m using this period of enforced social isolation to explore the weirder corners of YouTube for long forgotten and obscure movies. (My boyfriend Pal is accompanying me only semi-willingly).

In this freaky and claustrophobic psychological thriller, a jaded, wealthy young high society couple Paul (James Caan) and Jennifer Montgomery (Katharine Ross) avert ennui by throwing wild, hedonistic “happening”-style parties, indulging in pranks and dabbling in the occult. (You can easily imagine the thrill-seeking Montgomerys “slumming it” at Andy Warhol’s Factory for low-life kicks). One day an unexpected visitor materializes at the door of their opulent Upper East Side New York townhouse filled with pop art and vintage pinball machines. She’s Lisa Schindler (Simone Signoret), an inscrutable, world-weary Continental woman of indeterminate age, garbed like a black widow (black turban, black cape, the long black leather gloves of an assassin. If you imagine Games to be a fairy tale, Lisa represents the wicked witch). She claims (unconvincingly) to be a door-to-door cosmetics saleswoman, promptly collapses from exhaustion and then effortlessly inveigles herself into their household. Anyway, Lisa alleges she possess psychic powers, which amuses them. Paul and Jennifer had imagined themselves to be blasé sophisticates, but the depraved Lisa is in another league entirely. Who is she – and why does she have a pair of loaded pistols in her trunk? Soon the unlikely ménage à trois is playing increasingly perverse and sadistic mind games. How long before someone gets killed?

Truthfully, the "shock twist" that underpins Games can be easily deduced early on, but director Curtis Harrington maintains such a stylish and sinister mood you won’t really mind. In fact, any film by intriguing and durable maverick Harrington is always worth catching. An associate of Kenneth Anger’s, he graduated from underground avant-garde experimental cinema to low-budget horror movies (Harrington is an essential figure in the hagsploitation genre: in the early seventies he turned Shelley Winters into a scream queen in Who Sloo Auntie Roo? and What’s the Matter with Helen?) before later diversifying into television, helming episodes of series like Charlie’s Angels, Wonder Woman and Dynasty. Everything Harrington touches is imbued with an understanding of camp and an overtly queer sensibility. Maybe that’s why his camera embraces the male leads so appreciatively. (Games is a nice reminder of just how cute Caan was in his early male starlet days. His hair is even styled like a sixties-era Ken doll’s. See also Don Stroud in tight double denim as the horny grocery delivery boy sucked-into the weird rituals. Do yourself a favour and Google Stroud’s 1973 Playgirl pictorial!).

One of Games’ themes would appear to be the collision between American naivety and European “old world” decadence. Lisa has a powerful monologue where she explains that three times in her life, she had to scale a barbed wire fence to survive: “by the third time, I grew to like it”.  Much as I admire puffy-eyed French actress Simone Signoret's performance as the manipulative woman-of-mystery, Harrington originally conceived Lisa with Marlene Dietrich in mind and it’s fascinating to speculate how she would have interpreted the role. (There's no way Dietrich - who hadn’t made a film in years at this point - would have agreed to doing the part, but still!). My favourite moment in Games: an imperiled Katharine Ross is wandering through the house at night in a long filmy white trailing nightgown and carrying a candelabra, looking like every idealized woman on the cover of a sixties or seventies Gothic romance pulp novel come to life.

In Games’ opening party sequence, one of the most prominently featured guests is strikingly glamorous Czech actress Florence Marly. Marly, of course, made an unforgettable impression as the titular Queen of Blood (1966) in Curtis Harrington’s earlier science b-movie. Read my analysis of that one here.

Read Dreams Are What Le Cinema is For's perceptive analysis of Games here.