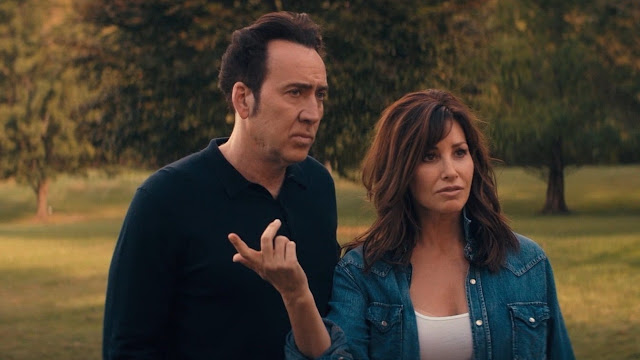 Recently watched: Inconceivable (2017). Tagline: “The perfect family. Perfect friends. A perfect surrogate”. I’m using this period of enforced social isolation to explore the weirder corners of YouTube and Amazon Prime for long forgotten and obscure movies. (My boyfriend is accompanying me only semi-willingly).

This amusingly preposterous low-budget pregnancy-themed melodrama stars Nicolas Cage, Gina Showgirls Gershon and veteran scary diva par excellence Faye Dunaway. I know what you’re thinking - what a cast! Except it could have been even better! One of the lead roles (manipulative villainess Katie) was originally conceived for messy Hollywood bad girl Lindsay Lohan! (The studio demurred and Nicky Whelan, a nondescript Australian soap opera actress, played the part instead). With Lohan starring, Inconceivable would probably be embraced today as a minor modern cult favourite like Lohan’s I Know Who Killed Me (2007) rather than wholly forgotten.

Anyway, Inconceivable cleaves very faithfully to the well-trodden conventions of eighties and nineties psycho-biddy psychological thrillers like The Hand that Rocks the Cradle and Single White Female (or in fact, The Temp which starred Dunaway herself!), but with the generic made-for-TV appearance of a Hallmark or Lifetime production. Cage and Gershon are Brian and Angela, an affluent middle-aged married couple who seemingly have it all – but struggle with infertility problems and crave another baby. They are susceptible, then, when seemingly innocent mysterious young single mother (and potential surrogate) Katie insinuates herself into their household. The only person suspicious of Katie’s intentions is Dunaway as Brian’s patrician mother.

Points of interest: Nicolas Cage's ink-y jet black dye job gives him that that aging male Goth look suggestive of late-period Nick Cave or Marilyn Manson. And his indifferent performance couldn’t be more “phoned-in.” Gershon does most of the heavy lifting in terms of acting and at least tries to muster some identifiable human emotions. Obviously, the mere presence of the imperious La Dunaway adds instant camp appeal to any film she appears in. She apparently broke her leg just before production, so the director compensates by only filming Dunaway sitting down. You never see her standing or walking at any point. Somehow this immobility contributes to Dunaway’s stateliness. In the spirit of chivalry, I won't comment on Dunaway’s plastic surgery choices, but the huge equine veneers on her teeth do make her slur and lisp her lines.

Fun facts: Inconceivable was filmed at the breakneck speed of just fifteen days and was scripted by Zoe King – the daughter of trash auteur Zalmon King, responsible for 1980s softcore faux-erotica like Wild Orchid (1989) starring Mickey Rourke. Inconceivable represented filmmaker Jonathan Baker’s directorial debut – and perhaps unsurprisingly, he’s never been entrusted with making a follow-up since. A nice example of Baker’s judgement: in an act of vanity, he made the executive decision to cast himself in a supporting role. Baker’s grandiose IMDb profile begins “Jonathan Baker has always been enthralled by smart storytelling and larger-than-life figures, taking inspiration from greats like Ernest Hemingway to guide his own sensibilities as a writer, producer, director and adventurer.” One of his personal quotes claims “I can wave my hand and make the impossible happen.” As the damning Hollywood Reporter review concludes: “the aptly titled Inconceivable is something that both Nicolas Cage and Faye Dunaway will want to leave off their filmographies, and at this point that’s saying something.” Inconceivable is FREE to view on Amazon Prime – as it should be!