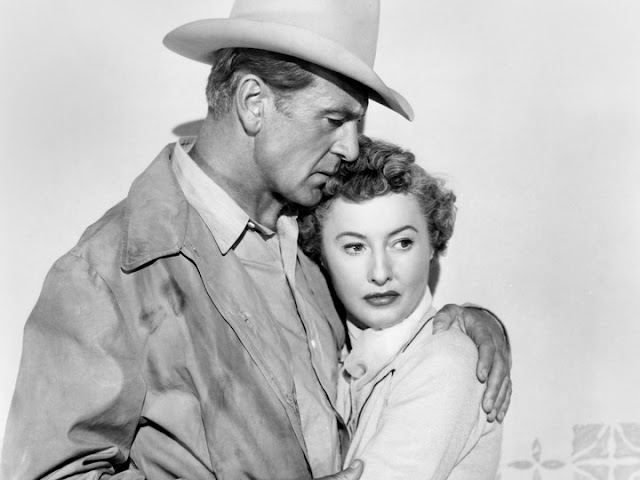 Golden age Hollywood royalty Gary Cooper and Barbara Stanywck memorably appeared onscreen together in the justly celebrated comedies Meet John Doe and Ball of Fire (both 1941). There’s a minor but interesting collaboration the duo made much later in their careers that rarely gets cited: the frankly tawdry, hard-boiled melodrama Blowing Wild. (Don’t let the title mislead you: it’s not an exploration into the heartbreak of flatulence). Blowing Wild deserves to be better known. At its best, it reaches a fever pitch of baroque, operatic lunacy that anticipates the 1954 Nicholas Ray Western Johnny Guitar.

Cooper is Jeff Dawson, a taciturn drifter searching for employment in Depression-era South America. Dawson’s luck seems to improve when local oil baron Paco Conway (Anthony Quinn) hires him as a foreman – but sparks fly when he discovers that Conway’s wife Marina (Stanwyck) is an old flame. And the highly volatile Marina makes it extremely clear she’s still carrying a torch for him.  Even when Dawson tells her, “You’re no good, Marina! You’re just no good!” she still lunges at him for a kiss. After Dawson contemptuously brushes her lipstick off his mouth with the back of his hand, she growls, “You tried to wipe me off before - and you never could!” Hugo Fregonese’s direction is terse and muscular. In terms of acting and charisma, you can’t fail with a cast like this. The performances from Quinn and Stanwyck are ferocious (Cooper is his usual laconic cowboy self). As Paco the cuckolded husband, the unfailingly intense Quinn oozes swarthy machismo and a constant patina of sweat. And Stanwyck is simply majestic as hot-pool-of-woman-need Marina. When Marina cracks-up spectacularly towards the denouement (Dawson to Marina: “It makes me sick to even look at you!” Marina: “You’ll never get away from me! I won’t let you!”), Stanwyck suggests a crazed Lady Macbeth figure. And then there’s Ruth Roman in the secondary female lead as Sal Donnelly, waiting in the wings to claim Dawson for herself. A sensual and earthy actress with a distinctive nicotine-stained voice, Roman elevates every film she appears in. There’s a deliciously bitchy encounter when Marina goes to the casino where Sal works to confront her rival. (It culminates with Marina sneering, “You're a liar, a cheap little liar. What can he see in you?”). Actually, I'd happily watch a 90-minute movie of just tough broads Stanwyck and Roman exchanging insults. 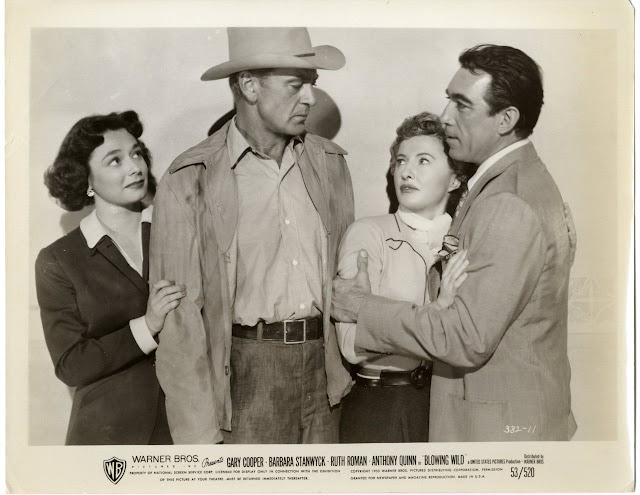 Early on, there’s one gloriously noir moment that justifies Blowing Wild’s existence: Paco roughly embraces Miranda from behind while she’s seated at her make-up table. Marina (clad in a black negligee) furiously snarls, “You smell like the gutter!” and Paco responds, “That’s just where I’ve been!”

You can watch Blowing Wild on YouTube (just ignore the Spanish subtitles):